The problem with being on the road is that you get in at 2 AM and the hotel wants you out by 11 AM (unless you need to leave earlier to reach the next show). Say you get to bed by 3 AM, if you’re lucky, and you have to be up by 9.30 AM at the latest, in time to miss breakfast and with only six and a half hours of sleep night after night. Could be worse, I’m not complaining, I could be in a war zone, but the only thing that keeps you healthy apart from proper food, is proper sleep, something to combat the long days of travelling, the hours and hours at the venue from soundcheck to encore, meet and greet, to the hotel lobby, and then there’s your washing. Heaven forbid you get sick. It was easier in your twenties, I’m 65 this year and I find myself collapsing into bed rather than jumping into it. We have 13 shows in a row in England in March, less travel time between cities helps but I still like to do a language lesson, write the blog every day, visit record and bookstores and eat properly as well as sleep to preserve my voice because when you do this you spend two hours singing and at least two hours talking and you need to be doing both, as well as concentrating on words, tuning and delivery whilst quipping your way through the introductions. Luckily playing the guitar just happens.

We were out of the Maryland hotel between 11 and 11.30AM and yes, they called from reception to remind us to vacate the room. Next door there was a garage but as we pulled in to refuel I noticed I was missing an earring, the one sessioneer Fred gave me as I’d lost one somewhere in Porto. Coincidentally I noticed it was gone as I was speaking to Fred on the phone. I went back to the hotel while Olivia filled up and there it was on the bathroom floor. We were now ready to leave and happy to be driving in the light without the rain pouring down. But another issue has come up. We don’t have an ‘EZpass’ to get through tolls and some toll roads don’t take cash or card, so we can’t use them – New Jersey Turnpike, yes, I-95 toll sections, no. Consequently, hours are piled onto our drive time as well as strange routes all around the houses, down narrow country lanes and through Mrs Johnson’s back garden.

We met sessioneer NJ Brian hours late at Guitar Center in Cherry Hill. I was going to buy a Taylor 12-string that had been shipped from another store. I tried it and I didn’t like it, it also had no case. I also tried a Guild but the problem is that none of these guitars are set up to play. The first thing you do when you buy a guitar is give it to a luthier and he hands you back the guitar set up to your specs, intonated, new strings, the string gauges you want, the action height. None of these things are included in the price. You have to have a vision, experience and a lot of knowledge to know that the instrument you are buying is the right one for you because your ears and your hands aren’t experiencing the best version of what you hold in your hands. In the end, Brian said I could use his Takamine 12-string, it’s set up, I like it. I will admit that an amazing guitar does talk to you even if it’s sick.

We exchanged guitars in the car park, Brian got his two 12-strings, the Takamine and the Taylor that he’d lent me, he also took my Seagull to look after it whilst I’m not in the US. Taking guitars across the seas on multiple planes isn’t the best idea, so I have guitars here. It’s harder (more like impossible) to do with the electrics and the amps because of the costs to duplicate everything. We said goodbye and drove north, it was dark now but not raining and we were on a Turnpike with no trucks. Nothing is worse than being sandwiched by 18-wheelers at speed in bad weather. If you slow down it’s even more dangerous, you have to keep up with the traffic flow. We decided that we need an SUV for the height and visibility, not a saloon car that feels vulnerable amongst the monsters.

On this trip we had managed to meet quite a few sessioneers but not Chris who lives in New Jersey, this was our chance, we had a car and were on our way back to Jersey City and so we went via his house in Bloomfield for a cup of tea. Great to meet, stoopid to think we nearly didn’t when he was actually the nearest to us. We had to rush out to get the car back before 11.30 PM and we wound our way through the Jersey streets until we were back where we started. We parked and got an Uber back to Jeanne’s, what a relief, we weren’t dead. 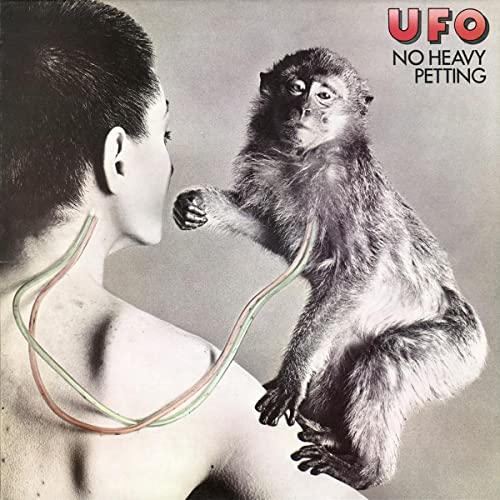 Music today has been UFO‘s No Heavy Petting because it’s just got a reissue with extra tracks and for all the dodgy issues with these NWOBHM records that the indie intellectuals like to expose, I like a bit of dry-as-a-bone seventies Schenker guitar. The title with its Hipgnosis cover, comes from a sign in the English swimming baths in the seventies. It reminded me of the time I went swimming in a pool in Glasgow whilst on tour with AAE that said, “No Nude Showering”.