Although Crosby’s death dominated Thursday’s headspace yesterday, I hadn’t become aware of it till we were sitting at Dallas/Fort Worth airport waiting for our plane that was delayed for nearly three hours. Olivia had read it online and told me as I returned from a wander. I know there are so many born in the forties who are going to be leaving us fast, McCartney, Ringo, Jagger, Richards, Dylan and many more who I like that are not considered legends and not everyone has heard of. Some of these legends (they’re all legends to me) we grew up with were born in the thirties – Ian Hunter is 83, Bill Wyman is 86, John Mayall is 89. These fellows were born before World War II had started in September of 1939. The fact that they are still with us is at least surprising. I suggest you go and listen to their music now before they leave us to join Crosby and Beck who have sadly both left us in the last ten days.

We flew United, it was very calm, we had an extra bag of luggage but Brian had taken my Seagull as I will be able to pick it up from him on Sunday in south New Jersey when we are on our way down to Frederick, Maryland. Why are we going to Frederick, Maryland? We had an Indiegogo album campaign for MOAT’s Poison Stream and one of the perks was a house concert, then the pandemic came. We’ve been waiting for an opportune moment to play and Sunday is it.

Texas waved us goodbye with a beautiful blue sky, a warm breeze wafting through the streets and the sun sat majestically in the sky. We went to see Carron in the main house for breakfast before we left. We hadn’t had much chance to see our hosts Carron and her English husband Ed, we live in a world where everyone is busy and between different hours and different jobs, never the twain shall meet. The opposite weather greeted us in New Jersey, we arrived in a massive rainstorm, the plane shook and the shock of the landing when I was listening to some mellow moment on my iPod took me back to the cold reality of the north.

Deplaning is always chaos as is getting the Uber from the airport but this word ‘deplaning’ is odd, is it from ‘dismount’? Can you ‘decar’, ‘decafé’, ‘detrain’ even? As we waited for the Uber, the rain came down like metal bolts from the heavens, the lightning flashed and the thunder rumbled around us, all this is why we were delayed in the first place. We arrived at the new terminal at Newark, very nice except outside the gaps between the new paving stones are exactly the same size as the wheels on your case, perfect for getting them stuck. 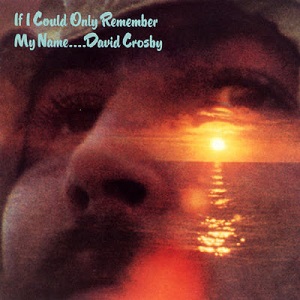 Music today has been that classic record from Crosby, If I Only Could Remember My Name (1971). What? You don’t have it? Whilst listening and buying The Stones, The Beatles, Dylan, Mayall, Hunter, and Mott the Hoople, get that one too. Then start on the artists you have never heard of – while they are still here.