Day three in the studio today and no bass David, so I was playing his lovely Danelectro, filling in for him till tomorrow night. We managed three backing tracks today with drummer John but we decided that on the last song, we should try something different and have Paul come in and play piano tomorrow morning. We might try some violin with Olivia if the piano idea works and with David coming in to play bass on four songs we may be on percussion with John by the evening. That leaves guitars for Fred and me up until Saturday afternoon when Olivia and I have to leave for a house concert in Celina and Fred and Gerri Ann consider their drive back to the twin cities before meeting up again a week on Saturday in Austin at the Cactus Café. When I get back to Porto I will stay in bed for days.

It was one of those days today where the sun was hot and the chill was present and as the sun faded the chill crept and climbed over everything. The one-eyed cat stared out of its one good eye, suspicious after losing an eye to someone unknown, everyone is a potential predator when you have faced such an injury in what was probably an attack rather than an accident. This cat doesn’t come to you, it keeps you at a distance and runs away if you get too close, wouldn’t you?

By 6 PM it was just Kevin and I in the studio, Olivia was at the shops fixing her glasses, so we listened to songs trying to decide what to work on throughout the evening, some needed bass, some needed a discussion with Fred first, some I’d already played on. We picked an interesting moody one and I jammed through it a couple of times and came up with an idea that I developed and worked on in the intro before moving on to different parts of the song to see what was needed and what I could add. This is one of the great moments in the studio, looking for a part and finding it.

We finished at eleven, we usually do around twelve hours in the studio, sometimes more, rarely less on this project plus with only six days we are trying to get as much done as we can in the time allotted. So after this week when Fred has left, I will be back in the studio on another project and will have a day for Fred’s project with Rich on keyboards and see if I can share some studio time to play more guitars on Fred’s project even though he won’t be here past Saturday, it all depends on how much time I need to finish the other project. 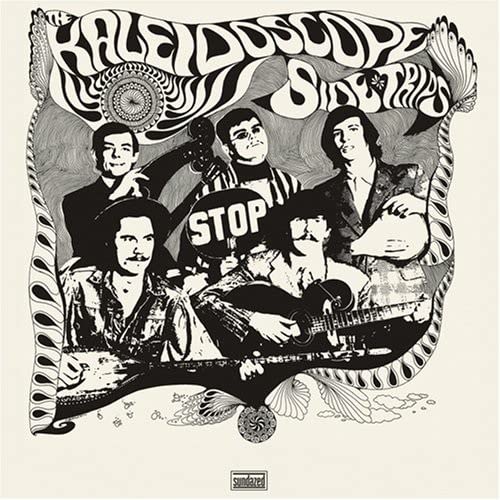 Music today has been Kaleidoscope, the other Kaleidoscope, the American one that starred David Lindley. They released their debut album Side Trips in 1967 and it’s a strange affair with diverse styles whereas the English Kaleidoscope stay strictly in psychedelia land, ironically there’s more experimentation with direction in the band that is less psychedelic. Having said that you hear more of American musical history in the American Kaleidoscope, not psychedelic in the English sense, there’s no Byrds-like country in the British version whereas you can imagine the American Kaleidoscope hanging with The Byrds, The Mamas & The Papas albeit at the weirder or at least more intellectual end of the bar. Chris Darrow went on to join the Nitty Gritty Dirt Band. The whereabouts of David Solomon Feldthouse, Fenrus Epp, and John Vidican, remain a mystery, although sadly Chris Darrow died on January 15, 2020. Solomon Feldthouse died on December 12, 2021.