Christmas day arrived and outside the snow made it feel real. Finally, it was a sweltering -13°C/8°F, there were 19 turkeys around the feeders, one of which was scaring off the smaller birds as it perched on top. Birds would fly towards the seeds, see this great big feathered lump and turn around and fly back to a spot in a tree or a bush, fidgety flight, fluttering, flustered and unsure if the turkey was a threat, it wasn’t, but it was certainly intimidating. Eventually, the turkeys dispersed and there was a flurry of activity as the smaller birds returned. I stood there staring out of the window wondering about the next time if ever, we would have a Christmas like this.

In two days we will be flying to warmer climes as we head south to Dallas, Texas. But I wouldn’t change the experience of being in the storm-beaten state of Minnesota for the world. Invited by wonderful people Fred and Gerri Ann to celebrate Christmas in their home. My only regret, I didn’t build a snowman. It’s been great to hang with Space Summit Jed and his wife Lisa, see sessioneers Erik and his sessioneer daughter Ava and to meet Fred and Gerri Ann’s friends and family, play a concert in the house and manage to have some local Minneapolitan fans attend. Great to meet future booking agent team of Joady and Andrew, despite the freeze, Minneapolis has been good.

If I was ever going home for Christmas, I would generally know quite a while in advance and I would call my mum and tell her. It didn’t matter if I called in August, she would always say, “What am I going to give you to eat?”. Vegetarianism was considered a disease in those days and it was pre-Quorn, pre-Linda McCartney’s and the idea of Christmas dinner without bloody meat was not only weird but a fad, 38 years later here I am. Mama always ended up with the same solution, nut roast. She would gaze at the cooking instructions as if they were in Finnish and begrudgingly place the abnormality in the oven. When it was served it was placed as far apart from the turkey as possible in case it contaminated the roasted creature, beheaded, plucked and basted, cooked in its own fluids. I was scrutinised as I happily ate like I’d been found abandoned in the wilderness and this was my first encounter with cutlery. The closed-minded self-confidence of the mainstream astonishes me to this day.

We had a lovely prezzie sesh, Fred and I both got Rockmans from Olivia, I won’t go through all the prezzies, I just picked these two out so you can listen for them on future albums. We played pool and afterwards had dinner, I think it was tofurkey, we had two types, the rubbery type, and the less rubbery type. Happy Christmas. The idea that veggies need a meat substitute that is as close as possible to meat, possibly caters more to those who would like to eat less meat but can’t bear the idea of food without blood, and by the way, we don’t crave bacon sandwiches, that’s a fantasy invented to associate burning flesh with normalcy. 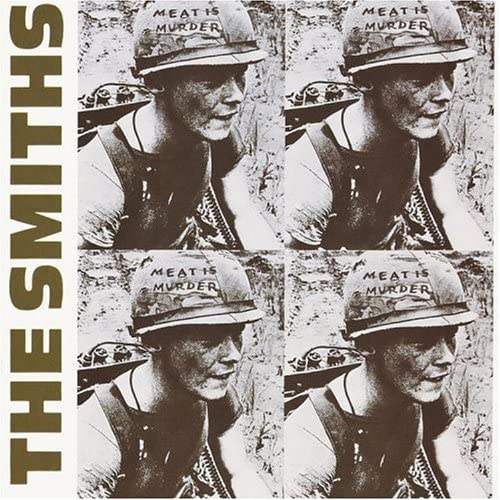 Music today has been The Smiths‘ Meat Is Murder (1985), with its headline-grabbing title and the tricky job of following up The Smiths’ debut album (1984) plus competing with the great Hatful of Hollow compilation that had Smiths fans chomping vegetables at the bit after the brilliant How Soon Is Now, the poignant Please Please Please Let Me Get What I Want, and Heaven Knows I’m Miserable Now. But that’s Hatful Of Hollow, Meat Is Murder went to Number 1 on the UK chart and The Smiths became that rare thing, massively successful with absolute credibility. The songs attacked the establishment, the Thatcher government, the education system. It addresses child abuse in Barbarism Begins at Home, corporal punishment in The Headmaster Ritual, the disenfranchised intellectual bedsitters fell in love with Morrissey. The pro-vegetarianism, and suggestion of brutality towards animals title seemed provocative at the time, these days not so much. I have my own feelings about eating animals, other people have their own thoughts on the subject, live and let live, people have to make up their own minds but I think a nudge towards the idea of not eating meat shouldn’t provoke umbrage, dismiss the idea if you wish, let’s talk about the dodgy things that Morrissey says these days instead.

There’s an interesting paragraph about the cover art on Wikipedia:

The album’s sleeve uses a 1967 photograph of an American marine, Cpl. Michael Wynn, in Vietnam, though with the wording on his helmet changed from “Make War Not Love” to “Meat Is Murder”. The original image was used for Emile de Antonio‘s 1968 Oscar-nominated documentary ‘In the Year of the Pig‘, Wynn stated in 2019 that he was never asked permission for the use of the photo and that he “wasn’t real happy” that the wording on the helmet was changed.