Settling in in Minneapolis, waking up with snow on the ground and more on the way. Christmas on the way, the World Cup final on the way, a Minneapolis house concert on the way and sessioneer Fred’s song pre-production on the way. Answering emails is on the way, listening to sessioneer songs is on the way and letting people know that we will be playing at the Galactic Headquarters in Dallas on New Year’s Eve is on the way. The Galactic Headquarters show is the ultimate in intimate. It’s next door to the studio where we record. New Year’s Eve always seems like a night when I’m not sure what I want to do so really happy to be playing. If you feel the same way come and see us and Salim and replace the hoo-hah.

Went to bed early, woke up early and immediately looked out of the window at the snow and the trees to take in the view of a real winter. Out there were American birds, cardinals and bluejays and after Gerri Ann had refilled the feeders, a gang of turkeys arrived to bully the rest of the birds away. It’s strange to see big birds like this running wild and jumping on top of the feeder and finding ingenious ways to get at the food. Later I saw a deer running in the dusk, it’s a wonderful place for wildlife, just ask the squirrels.

Fred and I went to the store and we ran around looking for things, zig-zagging between the aisles. It’s weird being in a strange psychedelic psupermarket in a strange land. What is it with muesli in America? It’s alien to the grocery stores here and if it’s called muesli, it isn’t really muesli. Granola is popular here but it’s so expensive, $7 for three bowls worth?

Ok, I won’t go on about supermarkets or food, I don’t follow anyone on FB for fear of having to see what they had for dinner or even worse what their cat had for dinner.

We got back in time for the Argentina/Croatia game. I was surprised to see Croatia lose 3-0 but at this level, you need the magic ingredient and Messi and Álvarez had it. Modrić can’t beat them by himself and Perišić and Kovačić are two stand-out players but not strikers (as Modrić isn’t). Their job was to feed the strikers but Croatia did not have an Álvarez or a Messi, a man with the magic touch.

The snow had been threatening to fall since 2 PM but it didn’t happen, it was weak rain and a brutally cold wind but no snow. We went out for something to eat in a restaurant by White Bear Lake, don’t ask me what kind of food I had because that would be talking about food again. We came back and opened some boxes of T-shirts, LPs, and CDs for people to purchase at the house concert here if they so desire. A couple of titles (and a couple of T-shirts) that are hard to find. 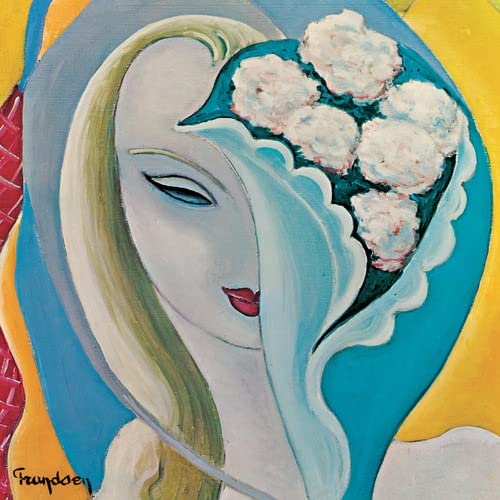 Music today has been Derek and the Dominos‘ Layla and Other Assorted Love Songs (1970) because Fred has a Pattie Boyd book on the coffee table (I met her in Stockholm). Eric when he was still good, a classic double album.