Slow start today after yesterday, last day in NYC and Portugal vs Switzerland on the goggle box (seventies speak) winning 6-1. Outside the rain came down and being inside, cozy and warm seemed like we were in the right place for the afternoon despite the nagging issue of having to get to the shops before they closed, well, there’s always Chicago, I suppose they have shops there too. We were ready to leave at about 5.30 and headed out into a wet dark street. The PATH train was pretty empty (there’s that phrase again) and we were soon in the city on 14th Street, one umbrella short and too late for the shops. We were meeting sessioneer Doug for dinner and he was close by, we decided the best place to meet was Strand books, close to both of us and always an inspiration.

Olivia waited for Doug in the entrance as I wandered into the labyrinthine cave and I headed for the Strindbergs, the Camus’ and Cocteaus to see if there were any new old editions since the last time I was here, alas there weren’t. This was mostly supposed to be a meeting place, not a three-hour visit that would include the upper floor where the rarer editions of books are kept and a look at some of the newer vinyl downstairs. Doug arrived and he and Olivia came and found me in a corner and wrenched me out. On the way out we noticed some of the accoutrements of a book shop that would be nice for the grandchildren, stickers, pencil cases, colourful erasers and sharpeners and as my Amoeba bag has a big hole in it I bought a new record bag with Strand Music emblazoned on the side, shockingly this bag was $25, they must cost two bucks to make. My justification for buying it, anything to keep this shop open.

We left the shop, walking in the rain towards the Thai restaurant on 9th, generous Doug wearing a waterproof, insisted I used his umbrella, and despite the weather enjoyed the walk under scaffolding, past the bright lights of the restaurants, and over the crosswalks till we found our way. It was a nice place except at some point a couple came and sat at the table next to us, I think only I noticed but the guy was loud, not only loud but his voice was weird, he sounded like he had wire wool in his throat. There was no bass, he could have cut through a curtain from across the room only with the sound of his voice. I was so relieved when they left.

It was getting late and Doug lives upstate and had to catch a train home (for two hours), we headed to the PATH train and just managed to catch it before it left, it was packed. At the other end, it was still raining but we braved the walk home to Jeanne’s and arrived in time for Warnock to be announced the winner in Georgia. I went to bed. 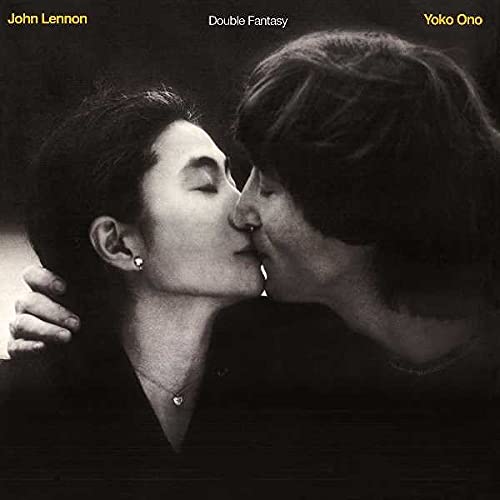 Music today has been John and Yoko’s Double Fantasy (1980) after being at the Dakota yesterday and reading that Chapman, sick in the head, shot Lennon in the back four times, in front of his wife, I despair that 42 years later the mentally unstable and the radicals can still get guns. The terrible thing is that there were no signs that Chapman could do such a thing, allegedly basing his justification on the fictional character Holden Caulfield from J.D. Salinger’s Catcher In The Rye and his own delusions.