A motorbike comes roaring down the street, full throttle, not an expensive posh motorbike but something older that makes a lot of noise because it’s had a hard life, a tired engine, a rusty chain, loose steering but travelling as fast as it could muster. It was being ridden by a kid with a pillion passenger holding on for dear life. Wrooom, it sped past us standing on the street waiting to go into the Indian restaurant that we visited on the first day. Silence, and then distant sirens, four Atlanta police SUVs, flashing lights like a Judas Priest concert in the mega dome, sirens louder, wailing, four in a row, top speed, chasing the bike. I suddenly realised I was in America.

It was the last day with Craig in the studio and it started off with the terrible news that the night before when we went to dinner he’d forgotten to lock the car door and someone stole his laptop out of the Jeep. I know the feeling of having something stolen, I still mourn the loss of my 1965 Rose Morris Rickenbacker 12-string (EB 157) even though it happened 25 years ago. Alas, all you can do is get over it, or at least place it in a compartment in the back of your brain and pull the curtain. For me, I have hope because both Peter Frampton and Jimmy Page got guitars back they’d lost years before – you never know. For Craig, he didn’t lose the data and he was insured, put it down to experience and as the computer was five years old, he needs a new one anyway…we try to be philosophical about it.

In the studio, I played some more of Craig’s Gretsch on two tracks and we looked at two more that Ben the engineer had been working on for mixing and made some comments about balances and overall sound. In between playing, Craig and I took the posh guitars that we’d borrowed from Michael at The Big House music and record store back to him along with the 1966 Fender Vibralux. Nice to have been holding a fifties Les Paul, a sixties Strat, a seventies Jazzmaster, and a white reissue SG-shaped Les Paul à la Glen Buxton and Sister Rosetta Tharpe. At the store, Michael told us he’d just seen a program on television about Rickenbacker that had me in it!!! What? Really? How’s that for coincidence? Thanks for the loan Michael, much appreciated.

Three days in the studio have gone so quickly but hopefully, we will be able to do this sometime again in the future. Working with engineer Ben has been cool too and it’s really great to see another sessioneer project taking shape, working in a real studio, and imagining a record that is inevitable. We had Craig’s wife Holly and their niece Lily come and visit in the evening, Holly has been so nice and helpful to us whilst we have been here. We said goodbye and went to dinner where the chase was on. There we met Mark, a buddy from the Night Of The Prog festival. He is a friend of the promoter and goes to the festival every year, he happens to live in Atlanta and always said, “If you are ever in town…”. 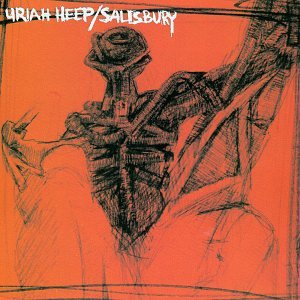 Music today has been the album I bought at the record/music store when we returned the guitars. A US version of Uriah Heep’s second album Salisbury (1971) with a different cover, I’m always looking for different versions of the same thing for the archive. Uriah Heep, the first band I ever saw. It was at Liverpool stadium in the seventies, I still remember how I was dressed.