Starting the day with an early sesh with Fred in Minneapolis, our last day in New York today, and another opportunity to walk around Manhattan in November in T-shirt and shorts, summer in November. We walked through the Jersey City streets to the PATH train, there are two, one to World Trade Center (Centre) and one to 33rd Street, we took the latter, and just seeing the words World Trade Center makes you contemplate that tragedy. On the train a girl with the most beautiful lips, designed by a ‘liptier’, we left her pouting on the train as we alighted at 23rd and we were back on the streets of Manhattan late afternoon, too early to meet our friend Hannah but with time to slowly make our way to Wagamama New York where we had agreed to go for dinner.

First though, in a coffee shop, the server told us he was going to London and was asking me about trips out of the city, I told him to go to Bath. Next, we found ourselves standing outside the legendary Chelsea Hotel, and connected to that building is a small guitar shop, Chelsea Guitars. Inside, Danny and Coby, Coby trying out a ’64 SG Junior ($7,000). They were cool dudes and we talked baritones and old EBows. We walked to Staples, I need some liquid pens and a notebook. I never remember the size of pen I want so I tried the 0.7, too thin, and settled on the 1.0, I’m convinced the different thicknesses make you write different things (haha).

On the way to meet Hannah, we came upon a second-hand record store and we popped in for five minutes (haha). I found three albums, Patrick Sky’s debut (1965) in perfect condition, a Four Men With Beards reissue of David Wiffen’s album (1971), these two and a US copy of Gentle Giant’s Interview (1976). I got talking to one of the guys that works there and discovered that it was Mick Collins, singer in Detroit’s The Dirtbombs. He gave me a great deal on the records and we had a good chat about the musical universe. Olivia was talking to the lady behind the counter (Jessica, a slam poet) and consequently we were a little late for meeting Hannah (Hannah plays bass with us when we are in the US).

We ate and walked past the towering Empire State Building on the way back to the PATH train home. The original skyscraper was changing colour as it does, a light show on New York’s most iconic building. We’ve learned to walk to the very end of the platform at 33rd Street. This is the start point for the train and guarantees a seat (it gets busy at the front of the train and at 23rd, 14th, 9th, and Christopher Street). The other day on returning to Jersey City, a girl had a beautiful white blue-eyed husky that whined all the way to Grove Street. It was really talking, you could feel the pain of being cooped up in a travelling tin box, I get it. 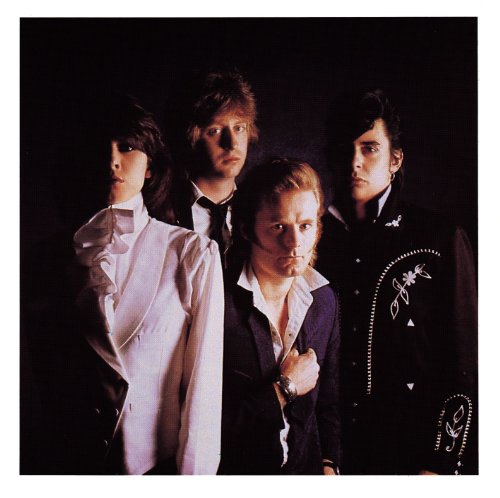 Music today is the patchy Pretenders II which is a little short on songs made up by Hynde’s attitude, although I love Talk Of The Town and it’s worth it just for that.