That posh umbrella from the accountant’s office was useful today as I went to get wet in the pool. I swam the lengths, chatted with Hugo and Al, and met Garance, a French girl who played the cello and showed us all how to make the butterfly look so easy, she also confirmed that my French was better than my own dilapidated moth. On the way home, the brolly was essential and when I got in, I put it in the bath to drip. I was hurrying down lunch because I had to get into town, I ran out of the house and forgot the brolly and it started to spit with rain. By the time I got to the coffee shop, the sky was getting dark, by the time I walked outside of the coffee shop it was coming down in drops the size of acorns. I stood there for a while waiting for the deluge to calm, and after five minutes it did, so I skipped through the new market for a quick avocado purchase and on to the light bulb shop, it was closed again, and the rain was coming back.

Around the corner, at Tubitek, I picked up my Revolver box set and the new Cult album and on leaving discovered the rain coming down with drops the size of kittens. I stood there, wondering why I’d left my brolly in the bath. I was stuck. There was a girl (Gabriella) sitting in a café under the roof where I was standing, I talked to her, weather talk at first, but then I discovered she spoke Swedish. Her partner (another Hugo) arrived, a small chat and then I sprang around the corner to the souvenir shop and bought a new umbrella. Tubitek had given me a big paper bag because the box was bulky but the rain was destroying it. The nice man from Bangladesh in the souvenir shop gave me a plastic bag to cover it up and I rearranged everything to not get wet and I left the paper bag behind.

I’d been directed towards another lightbulb shop and I went there for two tasks, a light bulb for the small lava lamp and a less bright bulb for the hallway light. I had to conduct the whole conversation in Spanish and understand as much as possible in Portuguese in reply. It worked, I got the lesser bulb but of course, the lava lamp bulb was too 20th century. I now have to get online and see what I can find because the shops have all gone LED, death for a lava lamp. That’s why I have two boxes of the bigger bulbs for the bigger lava lamps, they should last me to my death, their death will follow as the bulbs run out and they become obsolete. Of course, someone could find a stash in an old shop storeroom, you’d just have to hope that they knew what they were.

I got the train back as I had three seshes in the evening, Mike in Chicago, a preliminary with Bob in the Bronx, and Jeff in Ohio. The train wasn’t too packed at 6.15 but as I was coming from Aliados in the city I went to the wrong side of the platform, realised and ran back up the stairs to the other side. I don’t usually get on the train at this station but time and the rain made me do it. At home, post seshes a massive thunderstorm came in, the loudest I’ve ever heard here, it must have been right overhead. Shaking windows and flashes of light, house lights dimming, I was wondering if I should disconnect my computer because I heard stories of these storms killing them. I didn’t and it didn’t die, unlike 87-year-old Jerry Lee who finally left us today. 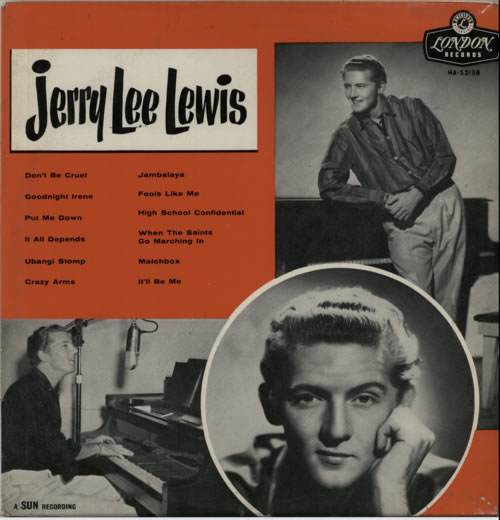 Music today has been Jerry Lee Lewis’ self-titled debut (1958). A hot R’n’R piano player, controversial, and the last of the great fifties rockers.