Today I witnessed the smallest of traffic accidents as a man was reversing his car into a space, and a woman went into the back of him. It was hard to see how it happened unless he stopped abruptly after he saw the space or whether she wasn’t paying attention or both. It wasn’t actually much of an accident but there was still that awful crunching sound. It happened outside the Pereira cafe in the Marquês square and there were people sitting at the tables watching it all unfold. The man got out of his car, looked at the clientele in the cafe, swung out his arms as if to say, “Can you believe this?” and then went to look at the damage. It seemed odd that he should approach the witnesses first, then look at the damage and then speak to the woman in the car behind, it’s the spectre of popular opinion. These are modern plastic cars that crumple on contact, a safety measure. The internet tells me this: “In a crash, crumple zones help transfer some of the car’s kinetic energy into controlled deformation, or crumpling, at impact. This may create more vehicle damage, but the severity of personal injury likely will be reduced.” Can you imagine what it was like in the fifties when a giant metal Cadillac collided with a Lincoln Continental?

It seems that it was raining in all of Europe today and halfway to the pool I thought I might be swimming before I hit the water. In the end, it wasn’t so bad and I jumped into the water relatively dry. I heard an American voice talking to Sergio the lifeguard – Al was from DC and is going to move here, it seems like so many Americans are looking at Portugal as a place to retire. We were discussing last night how I got to be a resident here by the skin of my teeth before the rules changed for Brexit. I’m not sure what we would have done if we hadn’t got in before the deadline. My residency was confirmed on December 30th, 2020, just one work day before the deadline. We probably wouldn’t live in Portugal if we had needed an extra couple of days.

Despite the rain, the locals were still playing Suéca in the square with the huddle of onlookers gathering a little closer as the clouds lowered. By the time I was out of the pool the rain had stopped. I had a small exchange with a lady from New Zealand in reception in pre-swim and later her German friend from Frankfurt walking outside the psychedelic psupermarket. They were trying to guess where I was from because I was larking about speaking in a Cockney accent, a Liverpool accent, and a neutral accent. The German lady thought I might be German! Haha. I told her my wife was German but I’m pretty sure my accent isn’t. I seemed to speak to so many people today, Sergio, Thiago, and Francisco at the pool, Catarina, the other Thiago, Vera, and Tânia at reception. Some of the guys in the changing room, João outside the computer shop, the bakery lady, and I apologised to the lady who I banged into with my shopping bag. There’s little opportunity for silence with so many familiar faces.

Two seshes tonight with Fred in Minneapolis and Noel in Surrey, lots of talk about guitars and the immersion of one’s self in music, sounds like a plan. There’s always another guitar to buy, I need a mid-seventies SG, a sixties Gretsch, a 1970 Firebird, and a baritone, and when I have those…haha. 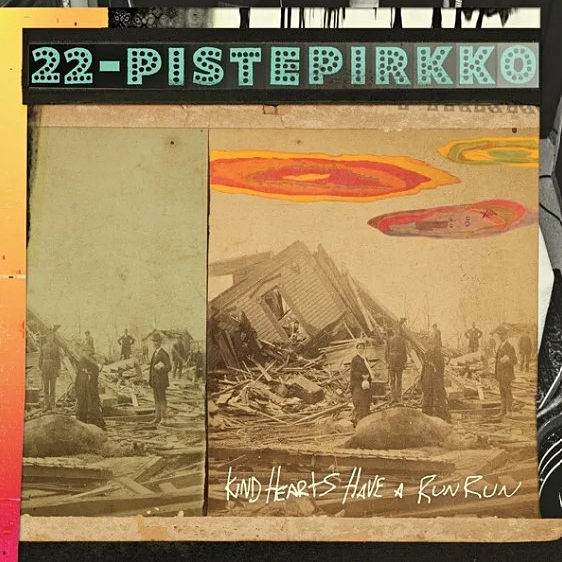 Music today has been the great 22-Pistepirkko’s new album with its odd title Kind Hearts Have A Run Run (2022). It must be a Finnish thing. I’ve seen them live twice and have most of their records, always been a fan, try them.