Oh no, the air mattress has sprung a leak! AAE Andy and Super Lisa went to bed, Olivia snoozed on the mattress while I wrote sitting on the couch in the front room. The air bed was on the floor in front of me and as I occasionally looked over at Olivia lying there I could see her slowly sinking into the mattress. Then, suddenly as if she’d been awake all the time she said, “I’m touching the floor,” and she got up and moved to the small couch. I carried on writing and when I’d finished I sank myself not into the mattress but into the couch I was sitting on, improvising in the wake of the leak. 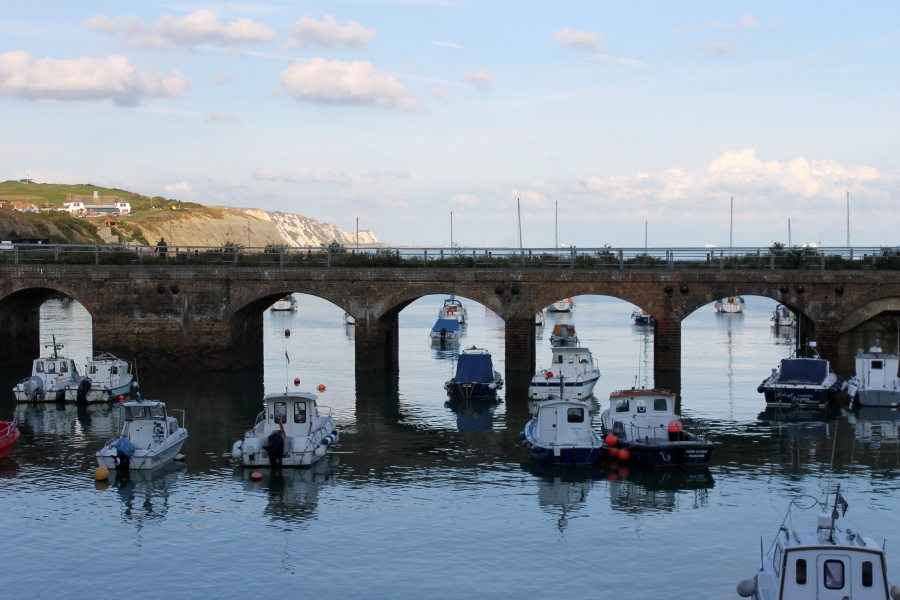 We didn’t really get up, we sat up and eased our way into the day from our emergency sleeping arrangement. It’s times like these that you love your own bed but comfort has its disadvantages and the unpredictability leads to one day experiencing Mont St. Michel, the next sleeping on yer mate’s couch. We hung out with Andy for a while before heading into town. Andy had generously booked me into a swimming pool for one o’clock but one thing led to another and although we left the house around 12.30/12.45 I didn’t get into the pool until 5 PM due to lots of unavoidable distractions – mainly veggie sausage rolls and the record store.

First though, could Specsavers get me an eye test and new glasses in a week? Answer, no, could Starbucks England manage a short cup, triple decaf, soya, dry macchiato? Answer, yes. Would there be a Gregg’s for veggie sausage rolls? Answer, no. Would the Grind & Bake Folkestone coffee shop and bakery have veggie sausage rolls? Answer, yes. Would I buy all five? Answer, yes. Would the owner castigate me for carrying a Starbucks cup into his independently owned cafe? Answer, yes. I told him, “Sorry, it was just in my hand”. It wasn’t like I didn’t buy anything there, plus I went and bought two Coke zeros but I suppose the spectre of the corporate monster was haunting him as he tries to survive in a competitive area. But unfortunately, the best decaf is at Starbucks whether you like it or not. Caffe Nero and Costa – it’s terrible and at the indie cafes it’s always horrible too and I’m pretty sure it’s because coffee drinkers don’t think decaf is coffee so they don’t try. Consequently, people are so down on it, I get it, it always sucks, but not at Starbucks and unfortunately, the real coffee drinkers think Starbucks sucks, it even rhymes with ‘sucks’ but I’m sorry, their decaf is the best. The caffeine buzz is irrelevant, the effect isn’t the point, it’s the taste. Don’t tell me how bad Starbucks is because I like it and don’t need to be told why I shouldn’t and decaf rools!

On the street was Sven, who described himself as an old punk. He was standing in for somebody selling old posters turned into metal signs of which we bought two, Help! and Yellow Submarine. We had a good chat with him, he’d lived in Germany for 13 years in Berlin and Hamburg until he’d been booted out by Brexit. He spoke fluent German and was explaining how he preferred the German punk scene to the English one, more depth. He’d brought his dog, Heidi, with him and was hoping to get an Irish passport through his grandmother so he could return to Germany which he really missed. It was where he wanted to be and Brexit wouldn’t let him. 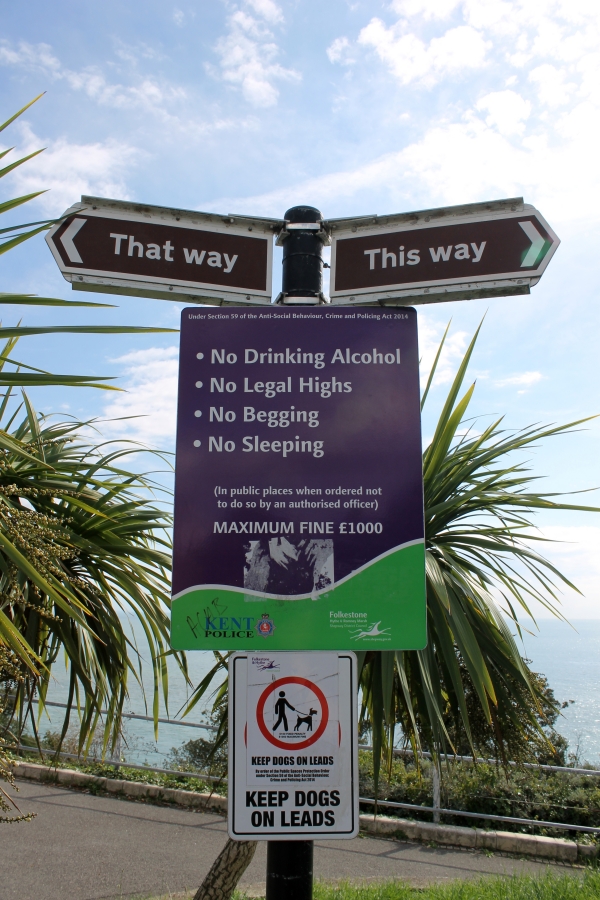 On the subject of signs, there were some arty signs on the promenade and an odd one on the fruit stand and there’s even more signs to follow later in the afternoon.

Finally, we found the record store and Steve who runs it, except he’s only been running it since Saturday. He’s just taken over from Alison who used to run it, so it was good to be able to go there and give him some business. I’d been there before, the last time we were visiting Andy and Lisa, so I was happy to see it still existed, the other record store I visited here had gone. What did I buy? Julian Cope – Drunken Songs (2017), Steve Harley – Uncovered (2020), Def Leppard – Yeah! (2006), Hamish Imlach – Murdered Ballads (1973), Be-Bop Deluxe – Modern Music (1976), Mike Monroe – Not Fakin’ It (1989), Tom Petty – Angel Dream (1996/2021), Thin Lizzy – The Continuing Saga of the Ageing Orphans (1978). Good luck and thank you, Steve, I hope it works out for you because a town without a proper record store isn’t a town at all. 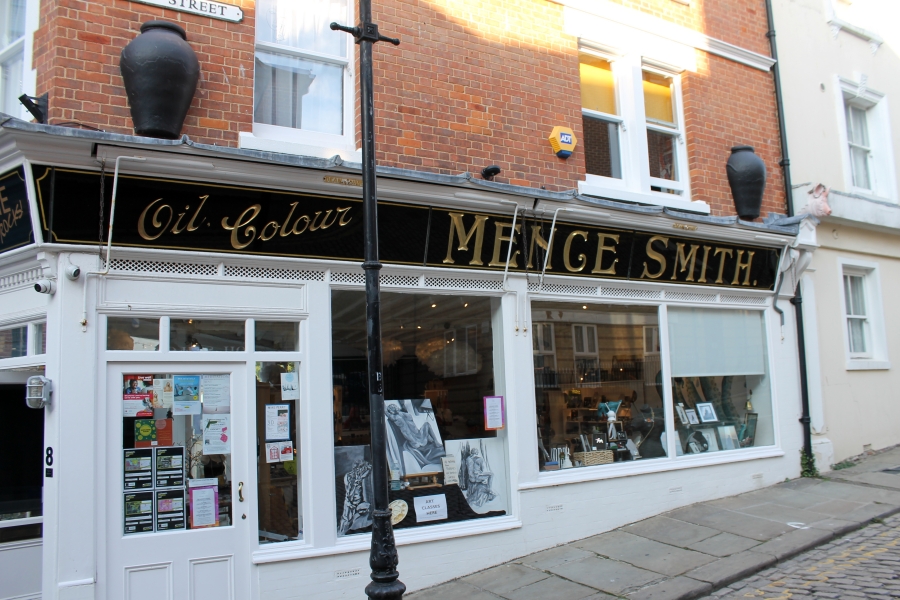 From there we went to the top of the street and Olivia looked in a store called Folkestone Rocks which seemed to be mainly a nerdy jewellery store. We got talking to the owner Dean. He lived with his wife upstairs, their daughter was a designer and they had bought the building. He went on to discuss the building’s origins and showed us the original sign outside that had been painted over in a dodgy mauve. They restored it and if you look at the picture, the letters are carved wood, painted gold behind glass, it’s really beautifully done and thankfully, it is preserved. Thank you Dean and family for doing that, it seems like it might have been painstaking work.

From there I actually went to the pool. It was in The Burstin hotel and was really small, it was not a lap pool. Simon on the desk called it a leisure pool (Simon told me his favourite album was Jeff Wayne’s War Of The Worlds, on vinyl). You couldn’t really swim in straight lines, just ’round and ‘round. It was like a large bathtub and there was a woman in there (Penny) teaching a five-year-old to swim. There was also a sauna, so after a while, I went in there too until a man came in and threw water on the coals (?) and it go too hot. Jumping in the pool again was wonderful though after being in the sauna.

I walked back to Andy and Lisa’s, walking up Remembrance Hill, the fence covered in knitted poppies, this was where a lot of the troops embarked to fight on the front in World War I and a memorial stands at the top of the hill in memory of the fallen. From the top on the promenade, I was looking at the vast ocean to my left, marvelling at it, whilst wondering how on Earth they got the permission to build new massive buildings on the beach. I walked past Leas Cliff Hall where Andy and I played with All About Eve in the nineties, tonight it was an ELO tribute band. 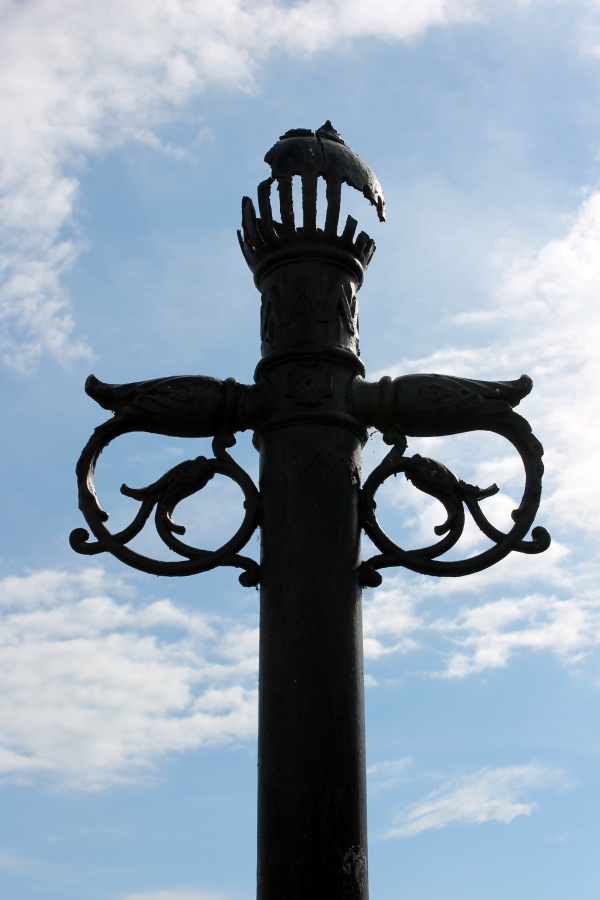 At home, the windows were rattling, and ringing Andy or the doorbell didn’t get his attention because he was jamming with Olivia. I called Lisa and she told me to ring another flat but eventually, they stopped and let me in, although, by the time I got up the stairs, they were at it again. Olivia and I had to leave pretty much as soon as I got there as we were going to Mark’s house five minutes away, but who is Mark?

Mark has been a collector of records, is a Hi-Fi buff and had gotten in touch with me because he wanted to donate six boxes of Record Collector magazines, mostly in binders, to the archive. Thank you, Mark. I signed some of his albums and we stayed a while talking music with him and his girlfriend Vicky. It was quite a stroke of luck that the Eurotunnel went to Folkestone where Andy and Lisa live and where Steve was and that we had Ariel and that we were on our way to the storage anyway, it was meant to be.

When we got back Lisa was cooking for us. So we sat and ate and after dinner discovered that Lisa had gone and bought a brand new airbed, thank you, Lisa. 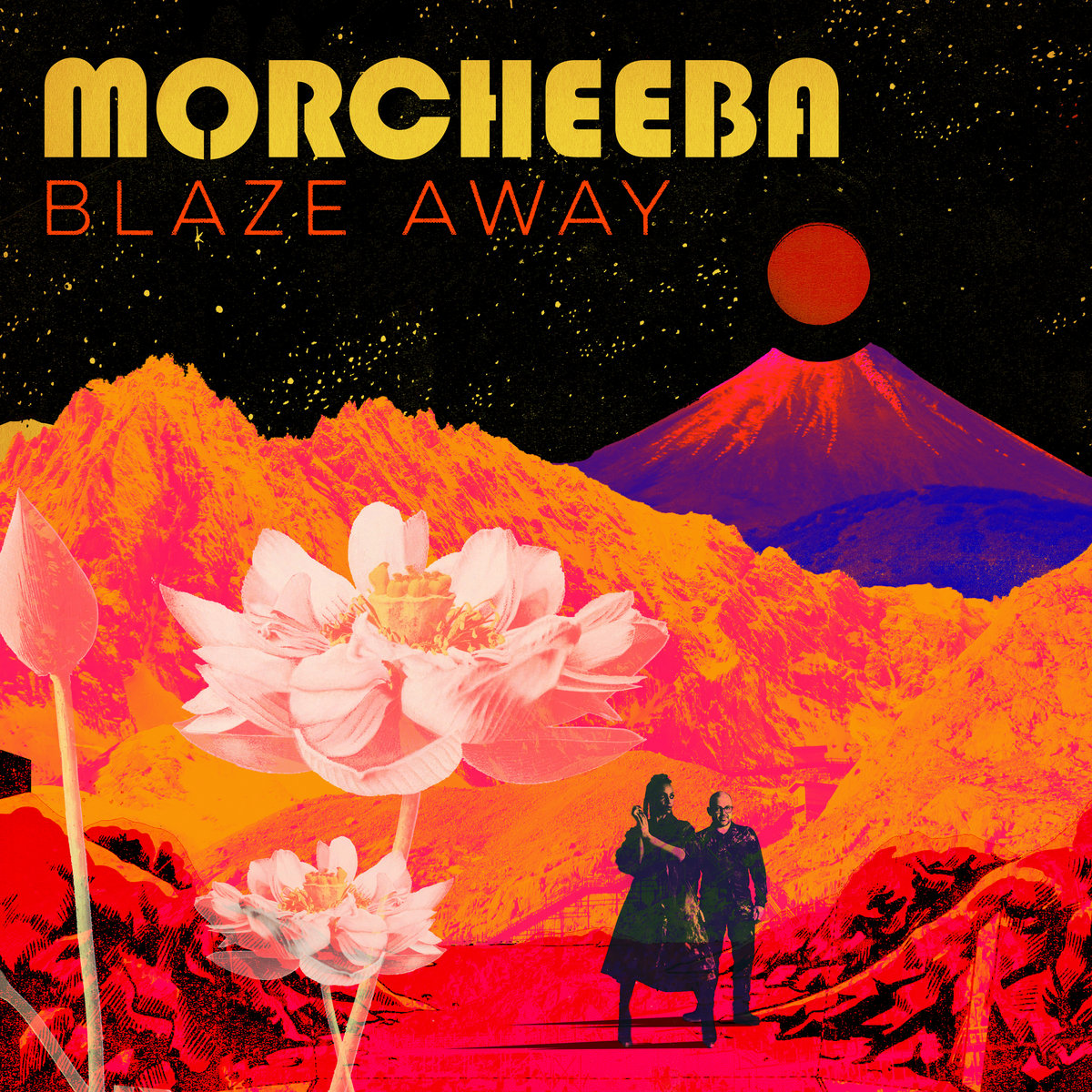 Music today was Morcheeba – Blaze Away (2018) because Steve was playing it at the record shop and I have a few CDs of their earlier albums.