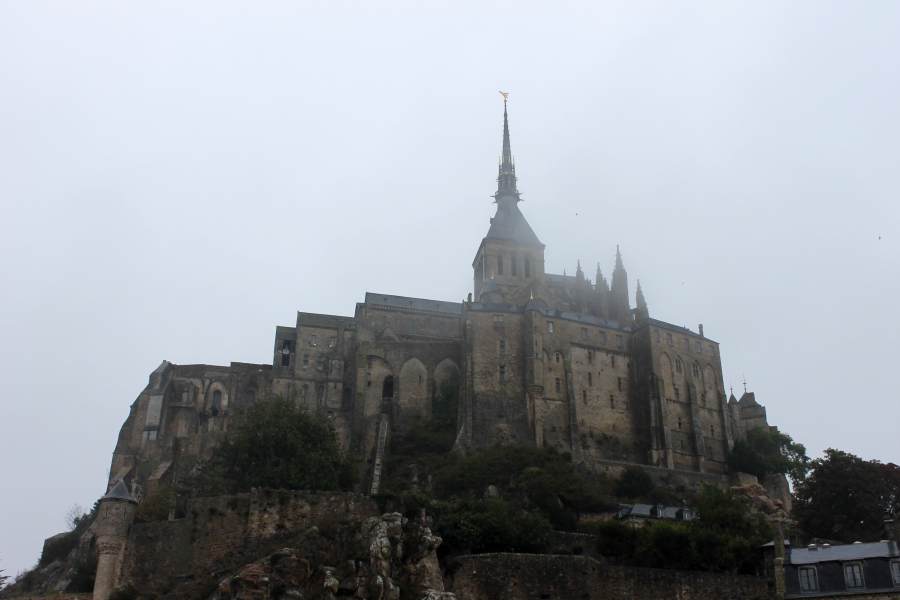 Oh no, I’m in a hotel paying for a room and there’s drilling? I got up, went to the door, looked down the corridor and there was a man on the floor right there, drilling into something or other on the wall behind where we were sleeping. I looked down at him, half-naked (me, not him) and I just said “Non”, he looked up at me with guilty eyes and said “Fini”. I went back to bed for another hour. We left the hotel and headed to our friends’ house, Virginie had taken their son to school, Arno was waiting for us with some nice lunch and a fantastic idea, “Let’s go to Mont St. Michel”. 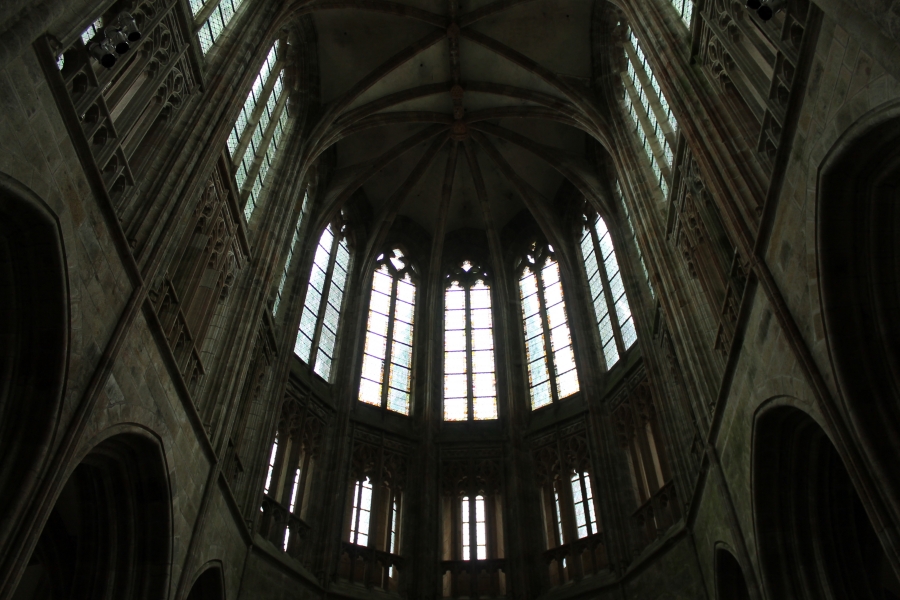 We left a mild day in Brittany and as we drove the hour and a half to Mont St. Michel we entered a miserable windy, cold rainy day in Normandy and by the time we arrived at the car park where you took the shuttle bus to the island, it was pelting it down. We parked and went to the bus stop where a bus was waiting (luckily) and headed to the world-famous and apparently second most visited French location after the Eiffel Tower. But what is it? Well, it’s an abbey with a town on an island and its history is so deep and long that you really need to go to the link and read up on it. The abbey itself is an incredible edifice and you spend the whole time wondering how on earth they built it, vast columns, massive halls, giant stones, huge fireplaces and built with such precision that one wonders how they got the UFOs to hover with such stability overhead when they were lowering down the columns, hewn on Mars and all part of the ancient intergalactic deal signed in Egyptian times that gave Earth alien aid in return for teaching the aliens about music, what it was, how to create it and how to appreciate it once they had learnt from the dissection of our bodies about how to make ears. 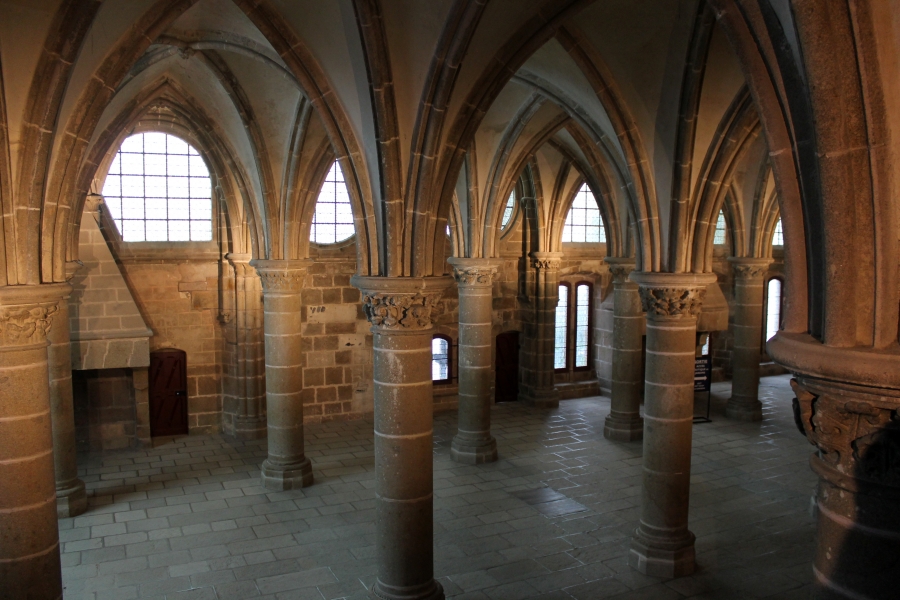 By the time we left, we were awestruck and drenched. But I pondered the awe and belief that the abbey builders must have felt to make something as incredible as this to praise what others have no belief in at all. The rain slammed into us on the causeway when we arrived and alighted (love that word) from the bus and had eased only slightly when we were leaving. We squeezed onto the shuttle bus that took us back to the car park and said goodbye to Arno but in truth, we’ll see him again in two weeks on our return to Portugal. 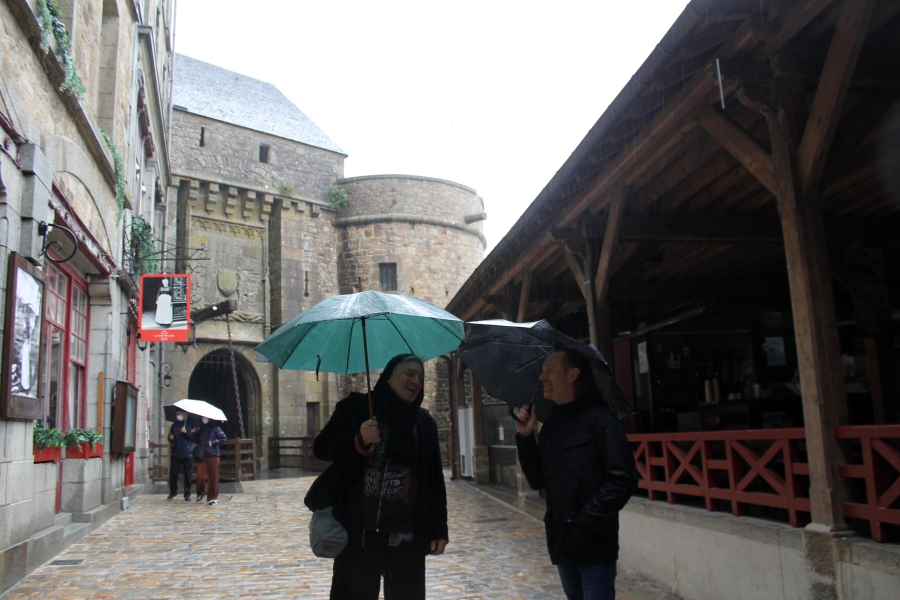 We had decided that we should drive closer to Calais to have less distance to travel as we headed for the channel crossing, so we left Mont St. Michel and aimed to stay in Amiens. We almost didn’t make it, our route had us drive for four hours on the freeways with no available petrol or food. We could hold out but Ariel was struggling and we had to leave the freeway to find a petrol station in a town off the freeway otherwise she wasn’t going to last, she was Running On Empty. We searched for somewhere to fill up, found somewhere but when we arrived it was closed, we were doomed to an impossible situation, stranded late on a rainy cold French night. Disaster loomed, but by some miracle, there was another self-service station close by, saved. In Amiens, it stopped raining. 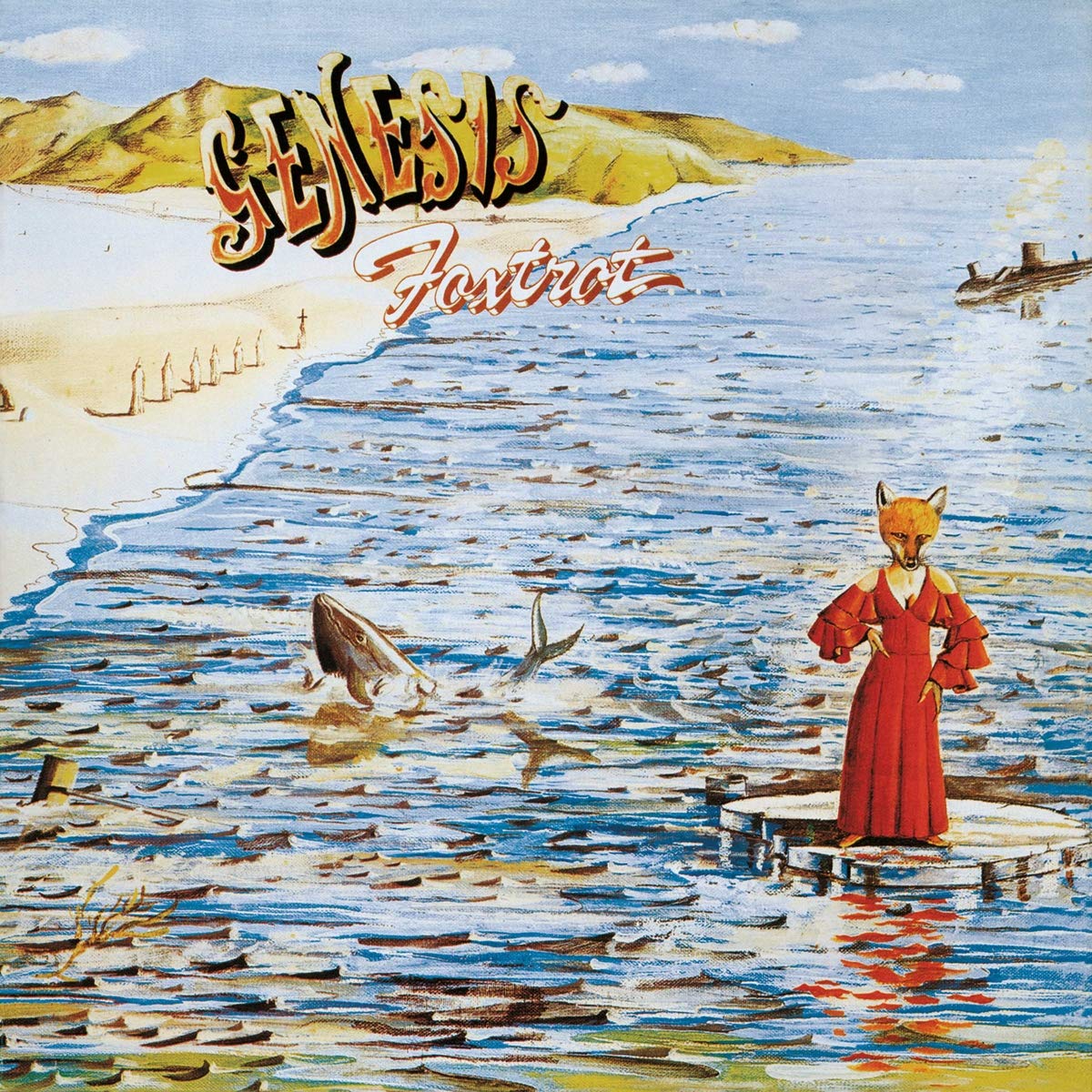 Music today was just one album to wake up to counteract the drilling, Genesis and Foxtrot (1972) came to the rescue replacing noise with progressive melody. Inside Ariel it’s too noisy on the freeway and sometimes I give up trying to hear, other times I play an album I know back to front and fill in the audio gaps, we need a subwoofer and bigger speakers. I’m going to ask Ariel what she thinks.