I was determined to get up this morning despite a late night because I had packages to send and the post office closed at lunchtime. Somehow I made it and two happy people (one in Stockholm, one in New Zealand) will be receiving their mysterious packages very soon, there’s nothing like a surprise in the post. It was market day in the Marquês square and I arranged to meet Olivia there on the way back from the post office. I’d managed to miss the first Saturday of the month by thinking that the market happened on the second Saturday of the month – it’s first and third, it’s first and third, it’s first and third! Today I got it right and we found some very interesting curios, an odd miniature doll’s head, a clock that looked like it was from 1968, a pink radio, a small pottery dish with ‘Le Homard Bleu’ written in French and a picture of you guessed it, a blue lobster. Six more copies of old Wire magazines, a Balinese metal goddess (or perhaps a ‘Metal Guru’), a copy of Rimbaud’s poetry in French and a small blue lava lamp. A perfect collection of fascinating objects for the In Deep Music Archive or the home, depending on the space. Sometimes we find nothing.

I ran into Nuno again and met his wife Sofia, he bought a very cool-looking edition of works by Rilke, it still had the price on the inside cover in escudos. At this stall, we met Pedro and Carolina and had a great long talk about the way things are, how they could be and what we might do about it. On to Emanuel for another stimulating conversation about music and the Wire magazines of which he seems to have an endless supply, one with Mercury Rev on the cover, another with Tom Waits, another with Faust, all for the Archive music magazine collection. We inched our way back through the busy throng on this hot Saturday afternoon (28 degrees). We talked to regular stall holders where we didn’t buy things, but they are regulars and so are we so we recognise each other and chat, even if we don’t buy. Languages abound in our day in some form, English, French, Spanish, German, Swedish, Portuguese and Swiss German, but that’s later.

Home for a quick lunch and dropping off our trophies and down into town where I wanted to pick up the CDs I’d somehow left at the record shop the day before. As they are only 5€ each I bought some more: Blonde Redhead – Penny Sparkle (2010), Black Sabbath – Vol. 4 (1972) and 13 (2013), Jesu/Sun Kil Moon (2016), Joe Jackson – Fool (2019), Broken Bells – After the Disco (2014), Jack White – Boarding House Reach (2018), Jaakko Eino Kalevi (2015) and last but not least, Daniel Johnston – Is and Always Was (2009). I have been wondering whether to pick up The Floyd’s A Momentary Lapse Of Reason (1987/2018) remix, where Nick Mason replaced all the horrible drum sounds from the era by simply playing the drums again, so I did. Jorge in the shop convinced me to buy the new Ozzy album, Patient Number 9, with the website-only cover that was mistakenly sent to the shop’s distributor – it’s a worse cover than the popular release. How the album is I have no idea, hopefully, the appearance of Jeff Beck, Eric Clapton, Zakk Wylde, Mike McCready and Tony Iommi might stimulate the guitarist in me and you never know with the Oz, but the reviews were glowing!

At the record store, we met Marta who we bonded with over vinyl and vegetarianism and after we left we walked through the centre of town towards a place where we might potentially be able to store The Archive until we find a proper place for it. On the way we made two ‘talking stops’, one with João and Gabriela, he told us he was 18 and I stopped him because he was wearing a Pink Floyd – Animals shirt, I wanted to tell him about the remix album. They were nice and very open to talk to an older man and his wife stopping them in the street to explain about the Animals remix. The other ‘talk stop’ was outside a bar where Olivia had nipped in to get some Fritz Kola and I started talking to two young guys sitting at the outside table, they were Swiss and spoke Swiss German, one at least from Zürich, a friend joined them. Olivia came and joined in and we laughed about imperial measurements and English spellings versus American spellings. We moved on and checked out the place where we could possibly have The Archive at least temporarily. It was a very hip shopping centre and very quiet at this time on a Saturday with nearly every shop closed but it could help, we’re running out of time to find a place.

Walking all day we took a car home where I immediately got on Skype with Nicklas from Anekdoten as we need to refresh ourselves for the Spanish show next Saturday in Peralta (near Pamplona). We spent most of the time talking about music, records, and the Swedish political situation and planned to rehearse together in earnest on Monday/Tuesday at least. Anekdoten play tomorrow at the Macken Festival in Stockholm at 5 o’clock. It was going to be an expensive exercise for me to be there and there are about 1000 heavy metal bands on the bill as well over the weekend, so we figured I could miss this one.

T-shirt watch today and yesterday were interesting in their normality, yesterday Metallica, The Beatles (Abbey Road) and AC/DC, today Tupac, Pink Floyd, ‘Dark Side‘ and Animals, AC/DC and surprise contenders Rancid and Rise Against. 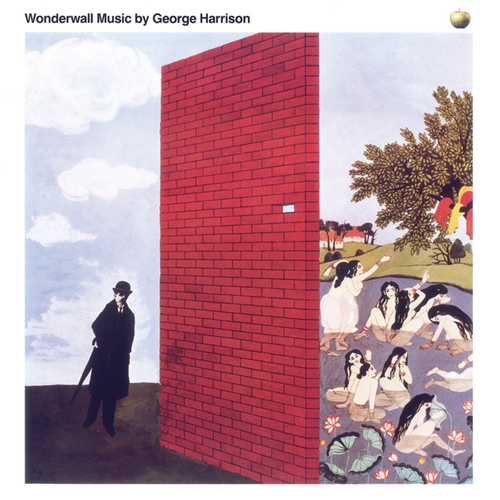 Music today has been a real oddity, the first Beatles solo record and the first release on the Apple label in 1968, George Harrison’s Wonderwall soundtrack. The film, directed by Joe Massot and starring Jack MacGowran, Jane Birkin and the controversial Iain Quarrier, is actually available to watch on YouTube, something few have done, now’s your chance.