Sitting down on the couch, on the cushion was a medium-sized feather that had floated in from a passing seagull. The night had drawn in along with a silky mist that also seemed to be light and floating. A small breeze wafted through and pushed and pulled left and right on Olivia’s dressing gown hanging in the washing room, suggesting she was here. You don’t close the windows in Portugal in September, there’s a long time to go before that happens. The birds have fallen silent now, the distant hiss of cars barely audible over the sound of silence itself. This is my favourite time, midnight till 5 AM, the city sleeps, shutters are down, lights are dimmed or out, the street lamps illuminated for the stragglers, for the night workers and the revellers who have no fear of Monday mornings.

Sunday seshes, Tony in Sydney, John in Brooklyn and then a Salim meet with the strange sensation of the three-way screen starring me in Porto, Salim in Texas and Olivia in Mülheim. With the death of the Queen, the football was cancelled but the Italian Grand Prix and the US Open tennis carried on which I mostly watched, but it seems to me that the reaction of football crowds was an opportunity missed for silence in capacity rather than the empty silence in the countries’ stadiums.

In the kitchen, I have an iPod dock but when Olivia is here she always unplugs it because she can hear a high-pitched frequency that I can’t. I suppose it’s part of the general deterioration that we all suffer as we get older but when she’s not here and I’m in the kitchen, I have it on. Every action seems to be improved by a musical soundtrack, except for perhaps reading, then it’s a distraction. It wouldn’t matter how engaging my book was, I’d still be noticing the bass line. So music and reading doesn’t work for me. If I want to read on a plane, the noise cancellation headphones with no music are my best bet although I always feel guilty if people around me want to sleep and I have that personal spotlight on.

I’ve come to a frustrating conclusion involving choices. If you are taking in everything around you, observing, noticing things and having an awareness of your surroundings, then it’s hard to switch yourself off to concentrate and all that awareness becomes a distraction. How can you read on a bus? All those characters around you, the streets rushing by, and if it’s a double-decker and you are on the top deck at the front it’s even harder to switch off from the world around you. It’s almost like I need a special reading space in a pod, in a secret place where I can’t be found and where I can’t find anything other than the book, then I can read undisturbed. In my younger days, I could switch the world around me off, these days I’m in constant analysis, or is it reflection?

It’s actually the same with music, who listens to music with the phone off, the lights dimmed and a Do Not Disturb sticker? I suppose some people do but you can’t have background reading like you can have background music, haha. I’m not talking to you whilst reading Mikhail Bulgakov’s The Master and Margarita, but I am talking to you with Wish You Were Here on in the background, I can talk and listen at the same time. I often wonder about that moment when you’re reading and you’ve drifted off and not read (not taken in) what you had actually just read. It proves your brain can read and consider different thoughts simultaneously, but processing them both simultaneously is the problem. 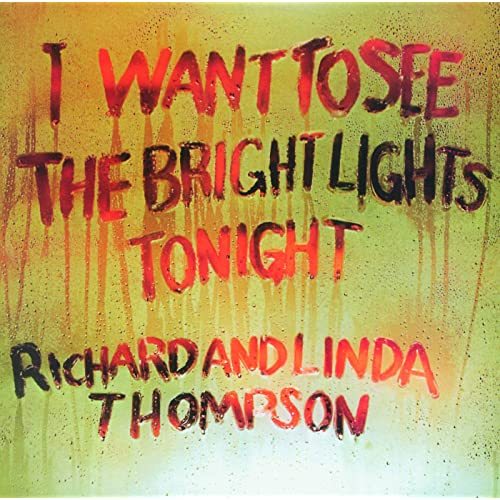 Music today has been the classic Richard and Linda Thompson album I Want To See The Bright Lights Tonight (1974) but I just want to see no lights and go to sleep.