The fog lingers in mysterious wisps outside the window, it’s close, it feels like it’s advancing towards you and will eventually enter through the window, filling the front room, limiting visibility unable to see the needle descend onto the record. But it doesn’t happen, the fog just sits there, you can’t see the hills or the houses in the distance, just a hazy mysterious cloak. It’s not cold and it’s not too hot so it seems like a perfect day to go into town. On the way down, one of the ladies of the day greeted us with a smile as usual.

It’s between ten and fifteen minutes to walk into the centre of Porto depending on how quick you move. It’s semi downhill (or semi uphill) and on the way down the left-hand side of the street is the sunny side of the street. It was the first visit to central Porto since getting back and as we got closer to the centre the tourist swarm became apparent. It was hard to get through them and as we reached the beautiful tiled Capela de Santa Catarina church they were here, there and everywhere and a lot of them just standing there admiring the church, as you would. We turned left and headed to our favourite coffee spot which was packed, they welcomed us back as we got our drinks takeaway and escaped the madness.

We headed to Tubitek the record store where I get my new releases. I’d had a few things on order whilst being away and some of them had arrived and were waiting for me to get back: Warpaint – Radiate Like This, Let’s Eat Grandma – Two Ribbons, Elizabeth Fraser and Damon Reece’s Sun’s Signature EP, Andy Partridge – My Failed Songwriting Career EP Volume 2, Neil Young – Royce Hall 1971 and The Smile – A Light For Attracting Attention. If I don’t order them, they’re almost impossible to get again as I know from missing out on Aldous Harding’s first album. I also missed out on last year’s RSD’s The Sweet – Platinum Rare Volume 1. I managed to get Volume 2 this year but I don’t really want to pay £100 for Volume 1. A lot of the records I’m after on vinyl come out in very limited editions. Gryphon’s ReInvention (2018) was allegedly only 300 copies.

We couldn’t stay too long at the record store as I had seshes and wanted to drop in at the music store to say hi. They were playing Eddie Hazel’s Game, Dames and Guitar Thangs, they always have something great on in there. It was a quick hello before a sprint back to the house for two seshes, one with Minneapolis Fred, the other with NJ Brian. It came to my attention that the weather forecast of cooler weather and fog had been dissipated by the sun melting the fog and I arrived back home drenched and jumped straight into the shower before the seshes started. Perfect timing. 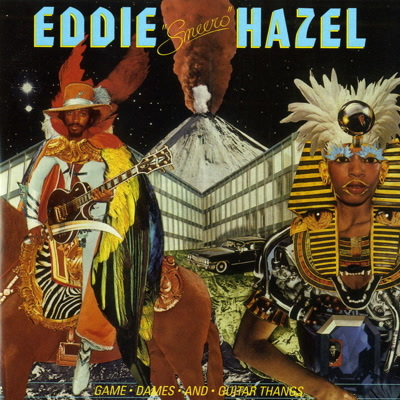 Music today has been Eddie Hazel’s Game, Dames and Guitar Thangs (1977). A funky Hendrix, Hazel played lead guitar with Parliament and Funkadelic and his name doesn’t come up that often despite his CV. Well now is your chance to go back and listen to your Funkadelic and Parliament albums or buy them if you don’t own them and while you’re there, search out this forgotten gem with its crazy covers of The Beatles‘ I Want You (She’s So Heavy) and The Mamas & the Papas‘ California Dreamin’.