There’s nothing like starting the day with a 6km walk down the side of a mountain, especially when you didn’t plan it and had no idea where you were going. I had breakfast, Olivia was going off to the festival early, so when I’d finished my Tension Tamer I just started walking, initially to see where the path that I saw from the hotel dining room veranda went. The path began right there but then it suddenly disappeared like it was entering another dimension. When I got to where the mysterious gateway to this other universe stood, what I found was a steep decline. Something made me continue descending on loose and jagged rocks and with each decision about whether I should continue or whether I should turn back, something pulled me further and further down. Perhaps it was the promise of a gateway to another world of magic or at least aliens waiting, glowing, their luminous limbs offering delights from other galaxies.

Ultimately it was just a path, a little tricky to manipulate, luckily I was wearing my trainers, breakfast footwear, and not my new Blunnies that have been ripping into my feet like marauding pirates’ knives on naked necks (I suppose that’s a little dramatic of an analogy). Suddenly the path levelled out amongst some bushes, dead trees and a curve to the right. Now I was faced with what looked like a pleasant unhindered walk forwards or a tricky climb back to where I’d come from. At that point, my decision was made for me as I heard a rustling in the undergrowth. It was a deer, as startled by me as I was by her. She ran through the trees and stopped to look and listen, weighing up the danger. I got a perfect view of her standing in the forest, what a gorgeous animal. A few seconds later she started running again and disappeared over a rise. That was it, I was hooked on the walk.

I kept walking, it was quite hot for 11 AM and I wondered if I should have been more prepared. I’d remembered that terrible story of the family who had died on a hike in America, mother, father and young child out of water, no phone signal and nobody aware of where they were. But I saw a man coming toward me and thought well it can’t be so much of a wilderness. I asked him how far had he walked from the village below the mountain and he had an exact measurement of three and a half kilometres. I’m not sure how far into the walk I was but I thought it was achievable, I wasn’t struggling, I wasn’t desperate for water (yet), there were patches of shade and I could see the Rhine below. I walked past another woman, and I asked her if there was a café down there, she said there was and told me that from Dörscheid (where I started from) to Kaub (where I was heading) was about 5km. I carried on.

I passed more people on the way and the path finally turned into a country lane that wound its way around the grapevines that sat in regimental rows on the mountainside. This in turn wound down to some ancient steps that led into the thousand-year-old quiet village of Kaub. It’s famous for the castle Burg Pfalzgrafenstein but having said that it seems that every village on the Rhine has a castle. I walked into the village, there was a small square with a pharmacy, a closed restaurant, a shop and a bakery. I went to the road at the side of the Rhine, briefly looked down at the water and headed back into the cooler and shadier interior of the village. I needed the loo but the cafe was closed but I went in through an open door anyway to find a woman cleaning. She didn’t speak German, English, French, Spanish or Swedish. I may even have managed to struggle some sense out of Portuguese and Italian by breaking into Spanish with a smattering of Portuguese or Italian words that might be similar. But, that wouldn’t have mattered, as I soon discovered she was Russian but she let me use the loo and that was the only communication I needed.

I walked the length of a quiet main street, a few tourists here and there who like me were wondering what to do now that they’d made the effort to come here and there was little to do after the castle and beyond the ten-minute walk that covered the centre. As I walked I noticed that there was a Thai massage. Really? There was a man walking on the other side of the street and I looked at him and said Thai massage? Really? Here? He laughed. I chatted with him walking for five minutes, he was attending the festival too. We stopped outside a house and as we talked, a German woman came out, her face lined by cigarettes and alcohol, she was wondering what spooked her dog. We parted there with the yapping, I carried on walking past an old disused wine-making factory until I hit a dead end. Some locals were getting into a car at the end and they directed me to where the path to return to Dörscheid was (they told me 6km). I thought I’ll get a bottle of water first. It was a big climb back in the heat and I considered my options, I didn’t want to be found on the path talking to the lizards. Then I ran into the man (Mario) who I’d laughed about the Thai massage with. I told him about the intimidating journey back and he offered me a lift on the way to the festival. This is why it’s good to communicate with strangers! Haha, thanks Mario, you might have literally saved my life.

At the hotel and it was still a while before Gerd, Olivia’s dad, was going to come and get me. It was hot outside, so I decided to write, do some language and watch a film on Netflix. I went for Luc Besson’s Valerian and the City of a Thousand Planets (2017), a silly sci-fi film with supermodel Cara Delevingne and one of the actors that feature on my never again list, Clive Owen (I’m not sure what it is). Haha, the creatures were great. Ethan Hawke, Rihanna, Rutger Hauer and Herbie Hancock also star, although I didn’t recognise the latter two. It is the most expensive European film ever made. I had no idea who the main guy, Dane DeHaan, was.

I made it to the gig and caught the end of Traumhaus, watched a little of Jadis and headed for the expensive Pommes. I was really only looking forward to seeing Hackett and the band play some classic Genesis tracks, but Lazuli came on, and they are such a good band, with good songs in French, and good dynamics. Dominic Leonetti is a good singer and his brother Claude plays a homemade instrument (the léode) that he plays with one hand, it is sometimes a bass and sometimes an effected original string instrument (Claude has a paralysed left arm due to a motorbike accident). But again, no amps, a guitarist doing solos with digital sounds. They were loved by the crowd and I like them a lot too, but I’d like them a lot more if they didn’t succumb to the dangerous digital future. As usual, the drums were too loud, who wants a bass drum like a cannon? Not me. A snare like a machine gun, not me, and toms that aren’t balanced properly and with a hi-hat you can’t hear, that’s pretty much every band I saw. But… 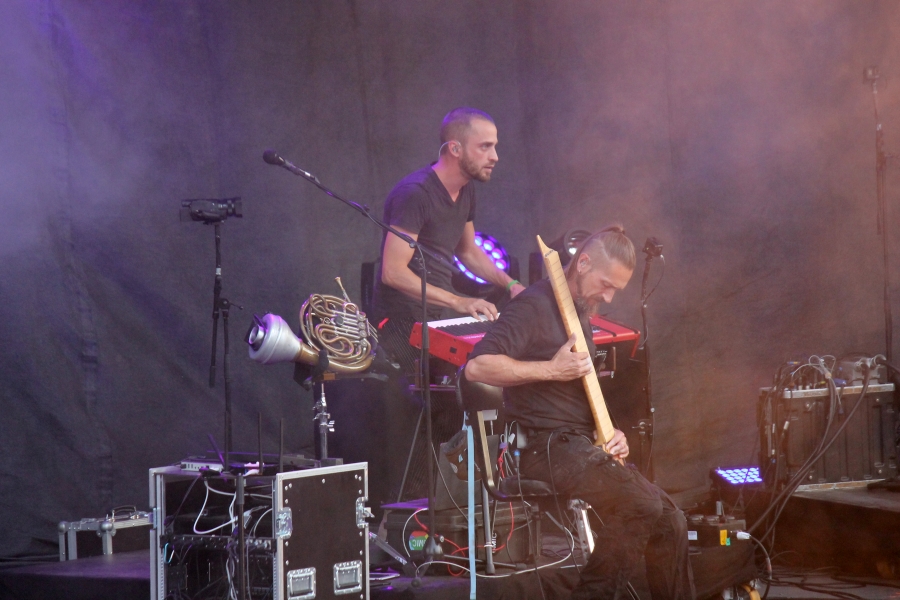 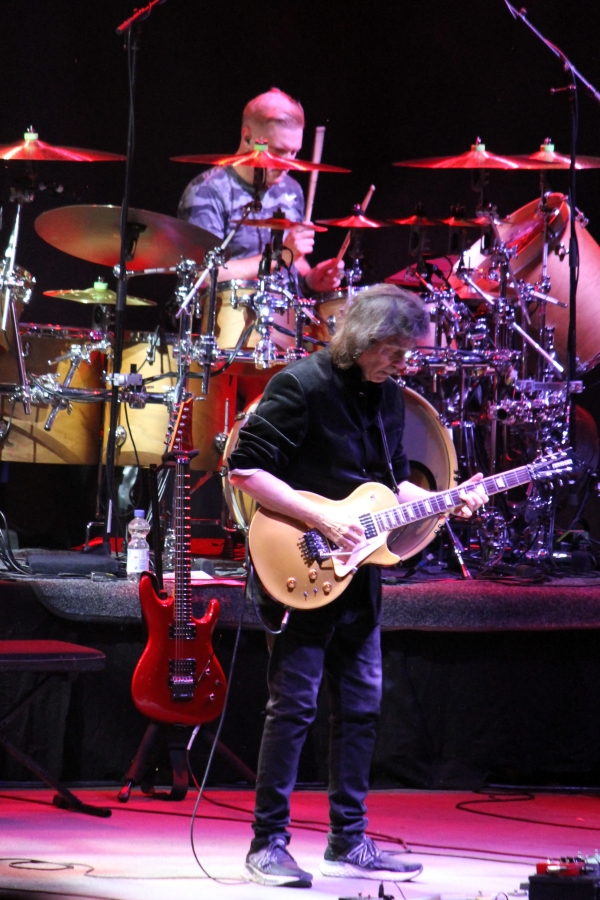 Then came Steve Hackett, we saw him recently in Sydney and it’s a tribute to the past but in Nad Sylvan (we spoke in Swedish) they have a really good singer who is in Gabriel territory but with his own take, he manages to deliver the songs expertly, sadly exposing the shortcomings of old Annie. Craig Blundell who also plays with Steven Wilson was mixed by someone who understood the place that drums should have in a live mix, no ridiculous bass drum and snare, it was then that you realised that they have their own sound man. Jonas Reingold played some classic Rutherford bass and second guitar and Roger King did a fine Tony Banks on the keyboards. Rob Townshend plays all kinds of percussion keys, sax, flute and wind instruments. The songs were great, plucked from various albums throughout the seventies. When it comes to Steve Hackett and his guitar and his guitar tone…guess what? He had amps on stage, Marshall, and a Les Paul…PLUGGED IN!!! The difference between the sound of him and everyone else, adding the sound man to the sonic picture was so much better than everyone else, another level. It makes me wonder how all the other bands and perhaps a lot of the audience don’t notice or demand this level of quality. 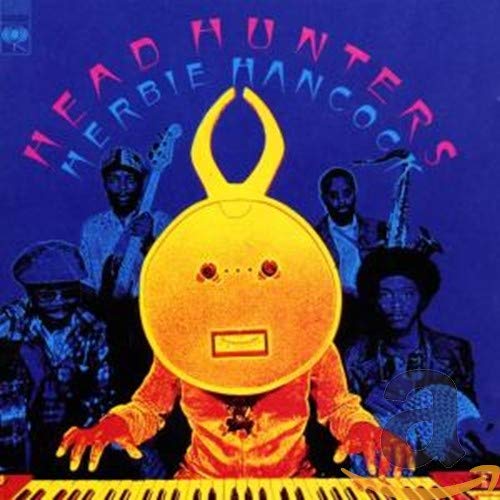 Music today was Herbie Hancock – Head Hunters (1973), an apology for not recognising him in the film.