Monday we went to Bonn in the massive heat, Tuesday was even hotter so we went to Cologne to experience city hell on a continent where melting humans is generally a rarity, we had to see it. Monday we borrowed Olivia’s mum’s car, today we were on the train. Olivia’s dad gave us a lift to the station. Olivia’s village is on a hill amongst the wheat fields and public transport, once seen in the distant past, is rare. All they have to prove it was ever present are blurry photos, something metallic moving so slow that the camera was unable to take pictures of this alleged machine that defied time. By the time you had clicked, the bus still hadn’t reached the frame. Cheap tickets on the trains have been a common occurrence across Europe with all the mess of heat, transportation issues and people’s general fiscal struggles in the wake of the pandemic, inflation, war and the threat of said European war spreading. It’s a mess in the air and on the ground, one wonders what the future holds.

We were heading to Cologne to meet our Australian friend Brigitte Handley. She is a musician and singer and she was in a band called The Dark Shadows, as it happened when we were working on the Arktik Lake album, bass player, engineer and co-producer DC is a close friend and also works with her. He gave us 20 of her CDs to bring to her in Cologne, perfect. We were attempting to get to her house but the cheap trains, the transportation problems and the oppressive weather had us change our plans as the train stalled at Köln Hauptbahnhof and an alternate route was chaotic in that the platform was packed, like a British beach in a heatwave. So we arranged to meet in the Belgian Quarter at Nunk, the record store.

Nunk was quite a way from the station but I was happy to walk the streets of a famous German city, past the incredible edifice that is Cologne Cathedral. I stuck to the shade seemingly more than Olivia did, running from the unprotected parts of the street to the shade wherever I saw it. We arrived at Nunk to find it had closed down, another victim of these difficult times for retail, for music, for musicians. The shop was now a DHL outlet, so as I had a duck-billed platypus and a card in my bag (yes, you read that right), we packaged it up and sent it to my granddaughter in Sweden. We met Brigitte on a different corner close by and she directed us to Parallel Records, another record store that was in the area. I’ve been there before and they have a great range of new and old records and are so organised it is easy to flick through on your search for gems.

I bought a bag of second-hand and new albums, including Dana Gillespie’s debut, Foolish Seasons (1968), not on Spotify, folks. A US promo of VDGG’s Aerosol Grey Machine (1969), Mountain’s double live, Twin Peaks (1974) on CBS in lovely condition and well priced, the Janus album Gravedigger (1972), it’s the one with the classic skeleton cover art, a French copy of Caravan’s second album, If I Could Do It All Over Again, I’d Do It All Over You (1970) in a different (and dodgy) cover, a whole lot of ‘Angebot’ (sale) records at 5€ each including a Sun Ra solo piano record from 1977 with no cover. It was the year that Sun Ra released seven live albums in one year. Staying on the incomplete, there was part of a Beefheart double set, Captain Beefheart File (1977), the cover and the other record long gone. An original Dreamboat Annie (1975) by Heart on the Mushroom, Canada label. Sticking in Canada, a Mahogany Rush album, What’s Next (1980). Guitarist Frank Marino is sometimes referred to as the faux Hendrix. Going to Sweden next for a Commando M Pigg album that I have but this one had a different cover. A German Steve Miller sixties comp and the Sharks‘ Jab It In Yore Eye (1974). On the cover in bold print: “Featuring Chris Spedding and Andy Fraser“. Andy Fraser was not on this album, details. Last but not least Robert Coyne (Kevin’s son) and Jaki Liebezeit – The Obscure Department (2013). I’m a big Jaki fan. Made in Cologne, Jaki is from Cologne, CAN were from Cologne and Jaki is buried in Cologne.

At the shop, I spoke to the owners Thomas and Mark about music and the universe, an old childhood friend of Olivia’s arrived and Brigitte, Marielle and Olivia sat on the couch in the corner whilst I dug. We left there and went to an outdoor veggie place where we all sat and chatted till 8.45 when we realised we were going to miss our train back to the wheat fields. Luckily the train was late by half an hour. It came, we got on it and then they told us, “everyone off”, the transport chaos continues. We waited for the next train which was also 20 minutes late. When we arrived at the station (with Brigitte), a strange fellow seemed to be following us, he sported an odd grin, a bare midriff and a short leather waistcoat with an eagle imprinted on the back. He was tall and strange, we went to the other side of the platform, he followed. We moved again, this is where Brigitte left us. When the train came we went to the furthest carriage, and there he was, we moved seats. The delays got to him before he got to us and I saw him disappear down the platform as the delays were announced. Still, it was weird, somehow we attracted his attention. On another day he might have been just a friendly guy, but today the smirk and the searching us out seemed suspect.

We waited for the next train, we sat on a bench, I ate some avocado rolls and a Kurdish family sat behind us with a screaming child, eventually, I turned around and started singing to him. He stopped screaming, it always seems to work, for me anyway, screaming children who are not actually in serious pain, seem to respond well to a human voice that can carry a tune. I’m A Believer always works. When the train finally came, I continued singing and we got talking to Alex, a stranger who said thank you for singing, it helped his stressful day, the child, on the other hand, continued his screaming in another part of the carriage. When the family (who were grateful) left, another baby screamed like Axl the rest of the way. Gerd picked us up later than expected at the station and drove us into the dark forest and to the plateaus of wheat.

At home we had a Skype with Salim in Texas, planning this, that and the other, it was nice to see him and chat and figure some things out with our musical connections. Then I hit the wall and was up to bed before Olivia had even considered ascending the stairs. 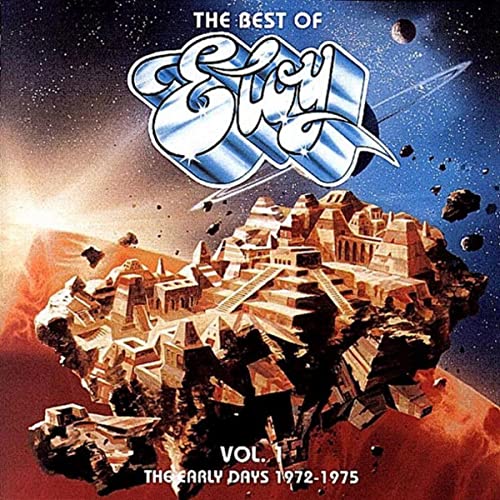 Music today has been Alex’s taste, one of them at least, Eloy, the best of. A German band that all of us nutty record collectors know about but many don’t.