As Olivia woke to her 6 PM alarm, her ‘check the washing’ alarm, I fell asleep. She soon followed and we found ourselves sleeping through the night and waking up at 6 AM, twelve hours later. Ok, that’s not exactly true, I had the seventies songs playlist on and as we drifted in and out of sleep we heard Nilsson and Rod, Alex Harvey and Fox, Kate and ELO. Usually that waking up period in jet lag can be frustrating and make you get up as you lose patience with your inability to drift off but I’ve discovered the solution: seventies pop. Warm and catchy, you wake, you listen and then eventually you drift off again after Thin Lizzy, John Lennon, Elton and Macca. It doesn’t really work with music eighties onwards, punk and new wave, jazz, reggae, prog or classical. It has to be short bursts of warm and tuneful songs that you know, songs that are ingrained, easy on the ear, your teenage soundtrack, your discovery years. These songs hypnotise you, and calm you down, they are stress-free, you know the words, the bass parts and the solos. They are the musical equivalent of the cat on your knee.

When we finally hit the kitchen, I was starving, I’d missed dinner completely and yesterday’s lunch had really been breakfast. So I woofed down two bowls of muesli with oat milk and four pieces of toast with veggie slices and cheddar. Glutton! We sat outside as the heat rose up from the ground and drilled down to Earth. Olivia’s mamma joined us, Olivia’s dad was pottering, Olivia was looking after the washing, and I was contemplating the planet and feeling the heat. The clock in the village strikes every quarter of an hour, at 7 AM, midday and 6 PM, the bells go nuts, there’s no peace in a country village – tractors, combined harvesters, farm animals being farm animals and villagers walking their dogs or breaking the bucolic silence as they drive to work in the city, likely in Bonn or Cologne. As the church tower went on a rampage, Olivia and I decided that we should hit the boiling city of Bonn and it’s expected to be 37 degrees.

We headed out and decided that we couldn’t eat any more sandwiches and went to McDonald’s where I ate a veggie burger (not bad actually) and Olivia had some weird-shaped chips, it was perfect because it wasn’t a sandwich, despite the bread, although McDonald’s buns taste more like small sofa cushions than they do bread. We got talking to an Indian girl who worked behind the counter, she spoke five languages. After the hot cardboard, we got back in the hot car and drove to Beuel, a suburb of Bonn. We actually missed the turn and had to drive over the Rhine and back again, the AC was dead but the windows were wide open on this baking summer’s day and Uriah Heep blaring out Demons And Wizards (1972).

We parked and headed to our destination, Nobbi’s record store. We always go here when we visit Olivia’s parents who live close to Bonn and Cologne. Nobbi greeted us and I began searching the racks, the first thing I found was one of the first albums I ever bought and the first band I ever saw, the much-maligned Uriah Heep and their album Look At Yourself. I can’t hear that they are as terrible as the critics and the cool kids always say, they just sound like a gutsy melodic rock band to me but perhaps the first band you ever saw will always have a soft spot in your heart. Sadly all but one member of the band that I saw have died, only guitarist Mick Box survives. I met him in Sydney once, lovely man, I had a copy of the US version of the debut album with me, he told me he hadn’t seen a US copy with the different cover for years. The classic lineup of Lee Kerslake (drums), Gary Thain (bass), Ken Hensley (keys) and Dave Byron (vocals) are all gone. On Look At Yourself, Paul Newton plays bass and Iain Clark plays drums, joining the Heep from Vertigo band Cressida. Osibisa play the percussion, Manfred Mann plays Moog on two tracks.

We stayed there for hours, I bought the Look At Yourself (1971) album because it had the original poster that I’d never seen before. I also bought a reissue of the Tudor Lodge album (1971), the 12-inch of Rescue (1980) by the Bunnymen that I’d never seen before, Copey’s Peggy Suicide (1991), Flying Lizard’s third album, Top Ten (1984), Robin Gibb’s Robin’s Reign (1970), And Also The Trees‘ The Millpond Years (1988). We stayed for so long searching and chatting, another philosophical customer, Christian, was there, we talked and talked. Olivia went away and came back and we talked again.

After Nobbi’s we walked across the bridge over the Rhine in the baking heat and found the house where Beethoven was born in 1770. We took some pics and went to the ramen place and from there we drove around in Olivia’s mum’s car listening to Steven Wilson’s Grace For Drowning and finally found ourselves at the supermarket before it was dark at 9.30 PM. We drove home, or should I say Olivia drove home. 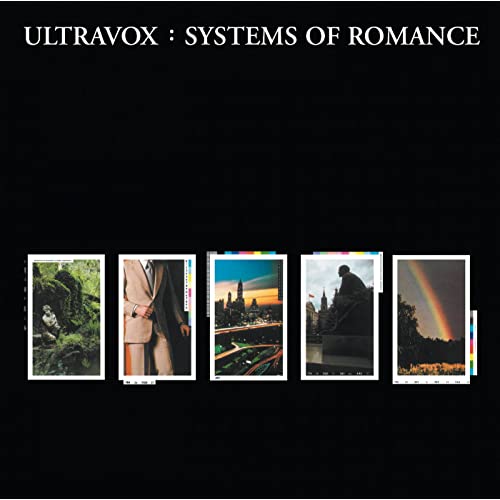 Music today has been many things but the album of the day has been Systems Of Romance (1978) by John Foxx’s Ultravox which I picked out for Christian.