Last day of comping the guitar tracks for the Arktik Lake record in Manly. It’s a windy and cold (for Australia), rainy day, getting to eight degrees at night but as I sit under a blanket listening to my passes on Strats, Gretschs and Les Pauls I look up at the video screen in DC’s music room studio to see Star Trek, the original series with all the colours and design of the day and it made me think that I was actually alive when they were filming that in 1966, eight years old and unaware of the profound influence it would have on the universe, on the aliens and the imaginations of the humans as they were transported into the wonderful world of sci-fi fantasy.

I’m not sure when I started watching it, whether it was when I was so young or whether it was re-runs but we had Doctor Who since 1963 anyway. I was five when William Hartnell, the first of thirteen doctors so far, graced the role and had us all hiding behind the couch when the Daleks arrived to do their dastardly deeds. All this inspired my first mega-reading spree with the books of Michael Moorcock. Again, I’m not quite sure when it all started but it must have been as a teenager. I remember characters like Dorian Hawkmoon, Elric of Melniboné, Erekosë and Jerry Cornelius. Titles I remember are Count Brass, The Jewel In The Skull, The Mad God’s Amulet, The Eternal Champion, An Alien Heat, Phoenix in Obsidian, irresistible.

I suppose that’s how I got into Hawkwind, space rock, and I saw Hawkwind with Lemmy at the Liverpool Stadium in the mid-seventies. The long jamming spacey songs, the light show, and Stacia (who I don’t think was there when I saw them, I guess I would remember). She is now 69 and probably immortal. We listened to In Search Of Space (1971), Doremi Fasol Latido (1972), Space Ritual (1973), the different first album, Hawkwind (1970, somehow produced by The Pretty Things‘ Dick Taylor), Hall Of The Mountain Grill (1974), as well as Robert Calvert’s Captain Lockheed and the Starfighters (1974), Warrior On The Edge Of Time (1975), and in the latter half of the decade, Astounding Sounds, Amazing Music (1976), Quark, Strangeness And Charm (1977) and as the seventies came to a close, 25 Years On released as Hawklords due to a dispute over the name, then PXR5 (1978) and Levitation (1980). It’s about here that I lost them.

Space has been a huge influence on my life but only from the angle of fantasy, I’m not technical, Olivia’s dad is a scientist and he loses me in ten seconds but anything scientific or technical you can lose me in less. Thank you all you nutters that inspired me to imagine impossible worlds. 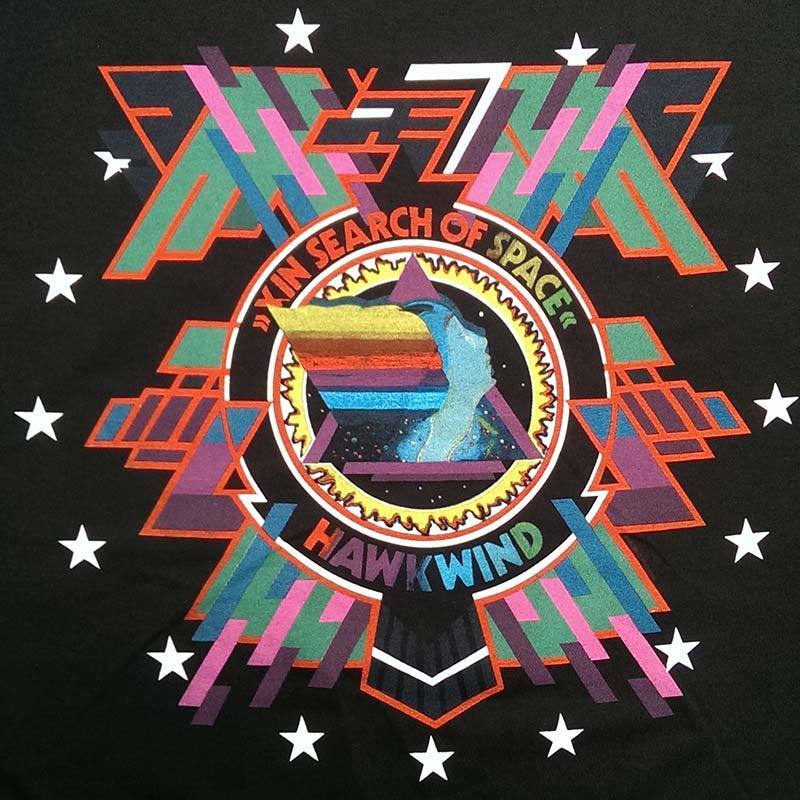 Music today has been Hawkwind’s In Seach Of Space (1971)