I awoke to do a sesh with John in Brooklyn this morning. It seems to be working with American sessioneers – night for them and morning for me. I was wondering whether it would work with the time difference but I seem to have figured it out. Talking of nighttime, it gets dark shockingly early here in Australian winter. After just getting used to summertime in Portugal with clock changes and extended daylight we’ve suddenly been plunged into early darkness. At 5.30 PM the sky is black and although the Australian winter is mild after what we are used to living in England, Germany or especially Sweden, a chilly wind and a short day remind you that winter is indeed upon you. Getting back to Portugal will be a real shock as we return at the height of summer.

We decided to walk to Dee Why. Olivia thinks it’s a funny name and I suppose it is. We were going to walk along the beach but stuck to the road. There was a police breath testing unit stopping the cars and apparently, they have the technology these days to test for weed. As a non-driver everyone drives too fast for me maybe it’s because I’m the son of Merseyside’s road safety officer. My dad was head of a government department that was dedicated to road safety in the northwest, stopping accidents with seatbelt campaigns and the like. He was often seen on the streets of Liverpool sporting a multi-coloured golf umbrella. Drawing attention to child safety and scaring people to death with posters of pretty girls with stitches across their faces where they’d gone through the windscreen because they weren’t wearing a seat belt, the consequence seems to be that with all that horror of death and damage on the roads, I don’t drive. 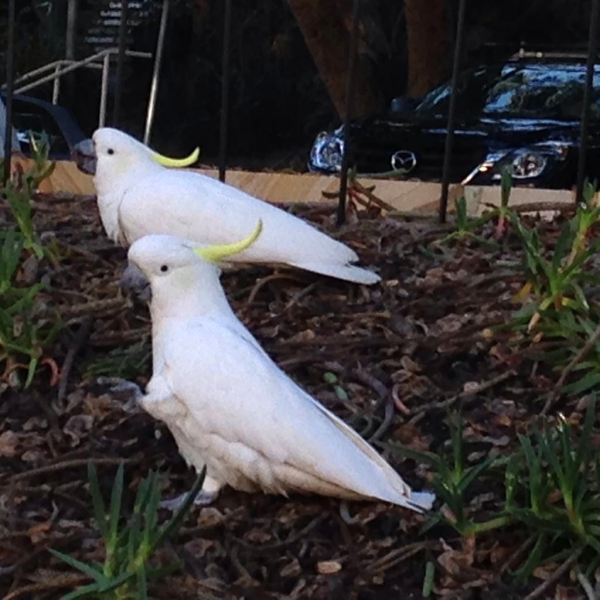 The bird life here was highlighted again as we walked. On the side of the road were twelve sulphur-crested cockatoos idly picking at the vegetation below one of Australia’s alien trees. We stood and watched them for about fifteen minutes before they eventually flew off, landing in a tall tree nearby, from there, flying through the trees screeching and squawking like the resurrected armies of hell. On the subject of the racket of Australian birds, outside our bedroom window here at Tony’s house, there’s a party tree (bottlebrush) for raucous rainbow lorikeets. Sandy, Tony’s son, put’s it down to the bird bath just below the tree in the neighbour’s garden where they can be seen frolicking and submerging themselves in the water frantically flapping their wings. Then there’s the kookaburra, which we hear each day, another bird with the cackle of an exiled witch.

Still on the subjects of birds, yesterday at Circular Quay where the ferry landed, the clash of beauty, fascinating nature and reality, as an Ibis rummaged through a garbage bin. Also on the walk a bush turkey casually wandering through a garden and of course the ubiquitous Indian Myna bird with its loud melody. By the way, David Attenborough is 95, go and watch his wonderful documentaries, knowing he’s still out there making them. 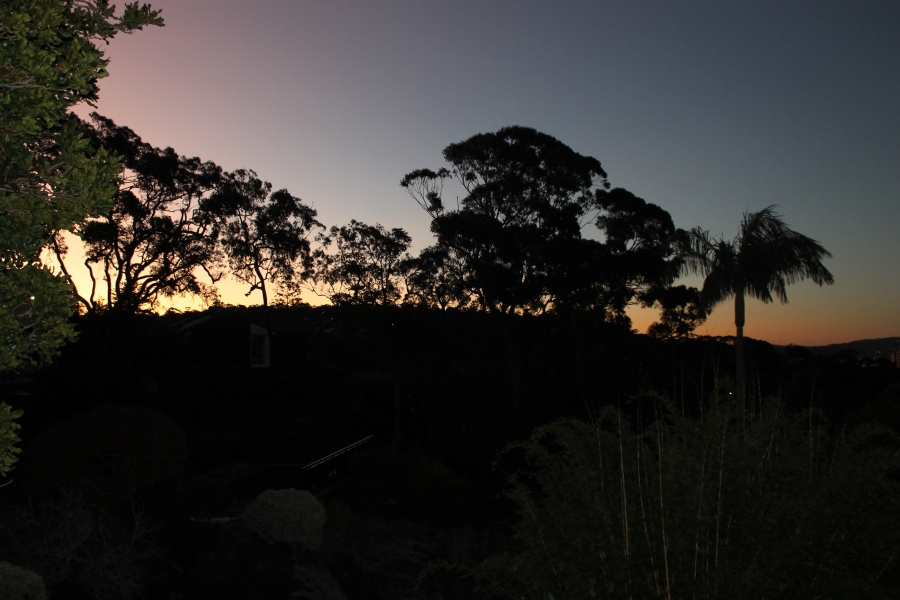 Last but not least on the subject of the exotic, at the psychedelic psupermarket I bought some psychedelic fruits: paw-paw, dragonfruit and red papaya, taking advantage of being in a country where such things grow. As the night drew close I took a picture from the balcony of Tony’s house that reminded me of Australia’s ghostly dusk. 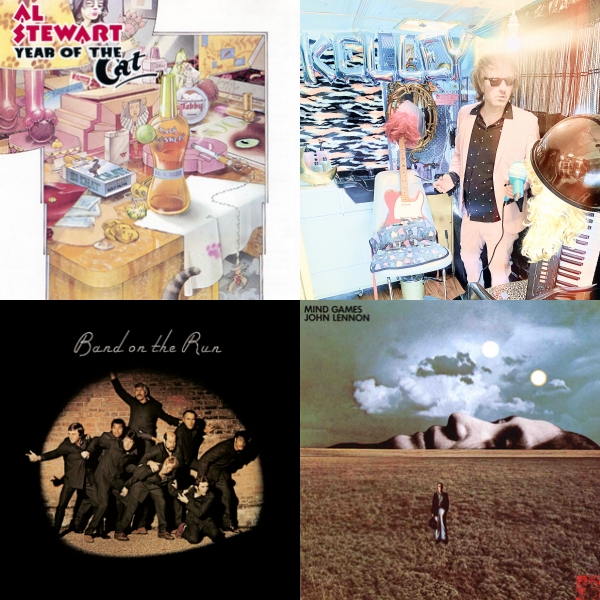