Today I have been in the studio playing an orange 1961 Gretsch 6120 with a tremolo bar. Some small issues with intonation on the b string and you have to be careful with the tremolo bar, but overall a sweet old guitar that makes a great difference to your playing, your inspiration to play and most of all your sound. I would always advise someone to buy an old guitar over a new one, although a new guitar might do something that the old guitar can’t…and vice versa. Best have both, then everything is covered, this is why us guitarist types have a few guitars, different sounds for different songs, different styles, solid body, semi-acoustic, low output pickups, high output pickups, six-string, twelve-string, solid body bass, semi-acoustic bass, acoustic twelve, acoustic six, nylon string acoustic, lap steel, bouzouki and of course different makes sound different to each other. A semi-acoustic six-string Rickenbacker sounds different to a semi-acoustic six-string Gibson, a solid-body Gibson Les Paul sounds different to a solid body Fender Stratocaster and so on and so on.

Today it was all wah-wah and solos, figuring out the notes, painting the picture, shading, the dynamics of light and colouring in. There are always technical issues to consider in the studio that can interrupt the flow. Today a channel went down, the Orange amp was crackling and had to be rerouted. Then the weirdest thing and we simply couldn’t work it out. Out of nowhere, we had a tremolo effect? But the tremolo was off, it took us ages to figure out that it was the tuner battery losing power and that it was creating an effect that we could only imagine was coming from one of the pedals malfunctioning. So, if it ever happens to you, now you know where to look and how to solve it.

I only woke up twice in the night and managed to fall back to sleep and eventually got up at 11 AM. It feels like the jet lag is finally on the wane. All this collapsing at two in the afternoon whilst being bright-eyed and bushy-tailed at 4 AM is just frustrating and terribly inconvenient. You suddenly find yourself waking up with your head in your soup or twenty-seven stops passed your bus stop. You can almost fall asleep in the middle of a sentence whilst enthusiastically taking a five-mile run in the witching hour.

Buddy, Tony’s dog, is snoring, and even though he is always looking up at you with mournful eyes, when there’s food around, he’s in bed and off with the dog fairies at night even if Olivia is crunching on a biscuit. Nelly the cat is out hunting for creatures as beautiful as her. Must be time for bed. 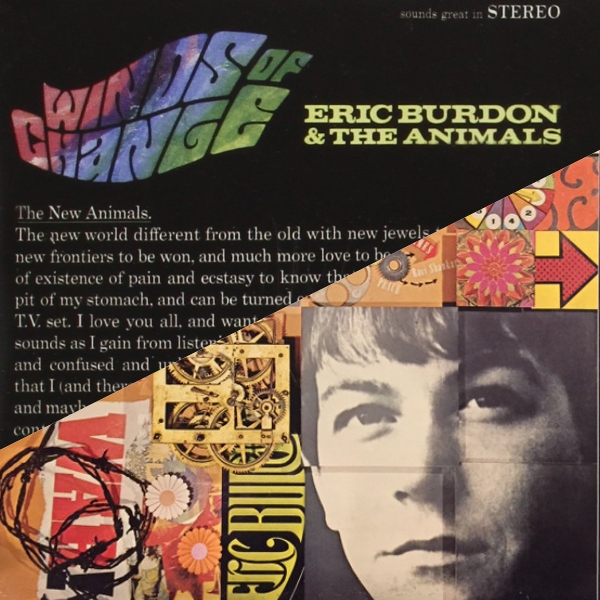 Music today has been Winds Of Change (1967) and The Twain Shall Meet (1968) by Eric Burdon & The Animals, a step away from the rhythm and blues of The Animals who broke up in 1966 and a nod to the burgeoning psychedelic scene. This period of Eric Burdon seems to be mostly forgotten despite some hit singles written by the band (San Franciscan Nights, Good Times, Sky Pilot and Monterey). Drummer Barry Jenkins had also played on the last two Animals albums. John Weider played guitar and violin before leaving to join Family as bass player. Bassist Danny McCulloch died in 2015. Guitarist Vic Briggs died in 2021.