Every day I walk home past the Cafe Pereira on the Marquês Square, the place has a ‘reputation’ and is open till midnight. But despite the beer and cigarettes on the tables, every day I see an old woman in there with a puzzle book, I suppose it was sudoku, it seems to be her habit. Talking of habits, at the traffic lights just beyond the cafe there was a nun in dark blue waiting at a red pedestrian light, people were crossing because there were no cars but not her. I wondered was she just patient, responsible and simply waiting for the green light to say she could go or was she unable to break the rule? Another nun in grey was walking in the other direction past the ladies of the day.

Weak drizzle and mild wind seem to be this week’s recipe. I get outside, I regret not having an umbrella and then five minutes later I’m glad I don’t have one as the drizzle fades and the breeze remains and other umbrella carriers fight with the elements for protection they don’t need. In the square, a man prostrate on a bench, but no regulars to be seen with the unpredictability upstairs. A woman on the bandstand, I got the feeling she knew the man on the bench but wasn’t there long enough to know.

I went into two shops today that I’ve never been in before. I was trying to avoid the psychedelic psupermarket, I really don’t want to go in there every day, even if it is psychedelic. Olivia had texted me saying we needed a vegetable so I decided to go into a real shop. The first one I went in, I pass every day but I’d never been in. I realised it was purely a fruit shop where all the different fruits looked like they’d come directly from the plant, it was organic and authentic, not a waxed apple in sight. Still, it had no vegetables. I went to another shop I also pass regularly and it was just as authentic with less of everything but with some vegetables too. I noticed that the broccoli I bought still had all its leaves, the psychedelic psupermarket cuts them off. Aren’t fruit and vegetables more appealing when they are scruffy with traces of soil? Sprucing them up seems an odd thing to do, judging fresh fruit and vegetables by their appearance rather than its taste, that is presuming the shiny apple is no match for the one without the sheen. The polish is to entice you but it’s the ‘warts and all’ rough pieces that are more appealing to me.

Three months without added sugar, coke or chocolate, cakes have been replaced by the occasional grape and a lunch alternately with carrot, celery and ginger and then strawberries or raspberries, yoghurt, kiwi and soya milk. All that seems sweet enough and I realise that fruit has sugar too. The less added sugar you have the more extreme it tastes when you have stopped regularly imbibing it. On tour with Anekdoten or after rehearsals with everywhere closed, there are difficult choices. I had a veggie burger from McDonald’s accompanied by a vanilla milkshake…so sweeeeet, too sweet. You have to ween yourself off sugar, the addiction that seems so benign – teeth, body, head, they are all so happy when you win against sugar. 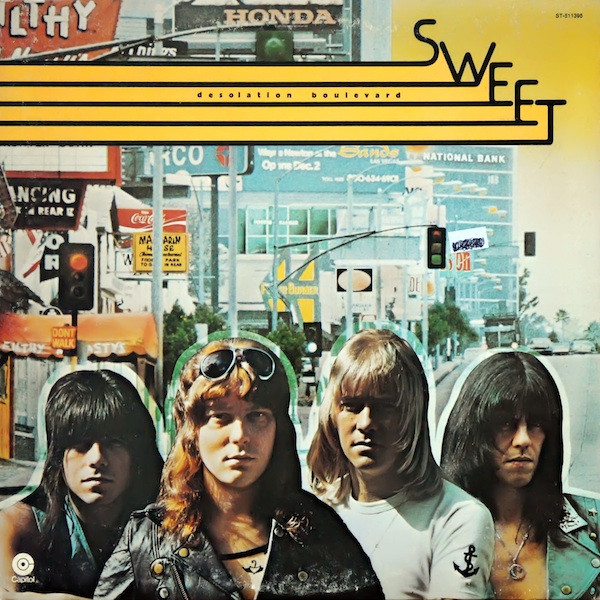 Music today has been The Sweet – Desolation Boulevard (1974), the album where the band, not Nicky Chinn and Mike Chapman, wrote the hit single Fox On The Run. There are different versions of the album, in the US the album included the Chinn/Chapman hit Ballroom Blitz. The album is a classic, glam rock, a catchy, raucous, melodic party with loud guitars and multi-layered vocals. A must for all fans of the seventies pop scene.