Walking across the Marquês square, the church was ringing its bells in an attempted tuneful pattern, punctuated by sour bell hits and a melody written by a madman. I suppose there was some kind of event on, it was around midday and there were people milling around as if they had witnessed something, perhaps a christening? The towers loomed and the bells were loud and I could still hear them some distance from the square. The local characters seemed oblivious to the noise, unmoved by the tune and equally not bothered by the cacophony. I always wondered about people’s interpretation of noise pollution, tuneless irritating bells don’t seem to irritate anybody. On the other hand, pop music has been irritating the older generation for decades, but what now when pop music is the older generation’s music of choice? Paul McCartney is 80 on June 18th.

At 64, I’ve been having trouble with the tendons between my thumb and fingers and this morning I woke up with pain in that spot. Repetitive computer writing, playing guitar, training, all things that are not convenient to stop. In the gym today I broke some world records on the bike and the elliptical but on the rowing machine, I felt something shift in my hand. It could have been perceived as something snapping but although it made that kind of freaky sound it felt more like a loosening and since then I’ve had no pain. We’ll see what the consequences are in the coming days.

Two seshes today, one with Craig in Atlanta and a project that is slowly building, the other with Brian in New Jersey that is turning into a record. Will keep you posted on all projects as they arrive. I’m in the process of trying to figure out how to get a guitar sound I like without turning the amp up too loud and not using the digital medium. I’ve figured out a way to use the amp louder and into the computer by disengaging the speaker and tricking the amp into thinking it is powering a speaker when it isn’t. The only problem is that the box I bought to do this, is the wrong box and I have to try and exchange it for the right one. I’m not very technical, my brain fuses when I see bare wires.

On a beautiful day, I went back to the guitar repair shop where Jorge, a man who does understand bare wires had fixed my delay pedal. It was him that explained why I’d bought the wrong box. It was a good job I was hesitant to plug things in, I might have blown something up. After the shop I walked back down those mysterious Portuguese back streets again and ran into one of my swimmer mates Francisco, getting off a bus and heading to the pool. He showed me the way to the pool up the secret steps that I missed last time I was winding my way through this unknown territory. There’s a whole city to explore here in Porto’s ancient streets. 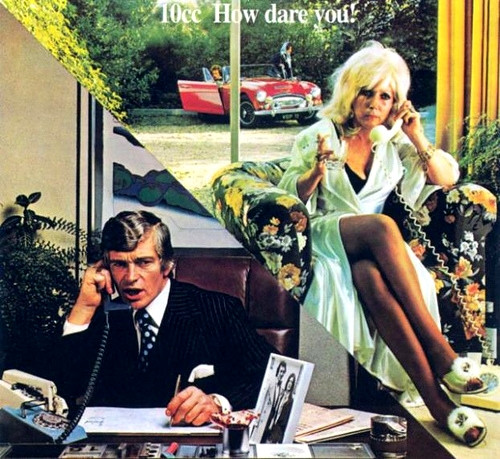 Music today has been 10cc – How Dare You! (1976), their fourth album. It had the hits Art For Art’s Sake (No.5 on the UK chart) and my fave, I’m Mandy Fly Me (No.6 on the UK chart). It’s arty pop by clever/clever singer-songwriter musicians Lol Creme, Eric Stewart, Kevin Godley and Graham Gouldman. Gouldman you’ll know from writing sixties hits No Milk Today for Herman’s Hermits (No.7 on the UK Chart), For Your Love (UK No.3/US No.6) and Heart Full Of Soul (UK No.2/US No.9) for The Yardbirds and Look Through Any Window (UK No.4) and Bus Stop (No.5 in the UK and the US) for The Hollies.