We watched episode 1 of Blue Planet tonight (from 2001), it was amazing of course, it made me wonder who sees animals and wants to kill them? Especially whales, there was a whole thing about blue whales, a heart the size of a car and blood vessels so large you could swim through them, who would want to destroy something as wondrous as that? With David Attenborough’s narration and knowledge watching a programme like this is a humbling experience. It makes you want to keep learning about the world, knowledge, what an aspiration. To know things.

Porto was a breezy, beautiful, summery place today. Dogman was out sitting in the shade, Bellyman was nowhere to be seen. I walked to the pool and had a lane all to myself. I talked to Francisco and swam 80 lengths. I half-heartedly tried to find the shop to take my delay pedal to be fixed but I had shopping and decided against it. By the time I got home, I was ready to go to sleep. I was suffering from a bad case of extreme comfort, nice walk, nice weather, nice swim, nice food and all I wanted to do was shut down. So I did, by first sitting on the couch and not moving and then after I’d made a salad of lime, arugula, cucumber and radishes with toast and avocado, some cheddar and more cucumber and washed it down with freshly squeezed carrot, celery and ginger, I listened to a playlist with Olivia playing the songs simultaneously on her violin. That really relaxed me till I turned into a giant sponge and eventually recovered and was able to execute simple tasks.

I had no seshes today and it was a struggle to get to things I could procrastinate over, returning emails, getting my pedal board set up, getting the amp sounds happening and into Logic Pro, I couldn’t do it, I was just drained. Earlier evening I watched Sheffield Wednesday vs Sunderland in the League 1 playoffs. I never watch League 1 but I did tonight. I did learn that football started with Sheffield FC in 1857. There are two teams in Sheffield, the former and Sheffield United and there’s a whole story of why. Not to tell here tonight but Sheffield United FC is the oldest club still playing.

We spoke to Salim in Dallas about upcoming projects before we finished Blue Planet but otherwise, I can’t remember all the things I saw today that I told myself I would remember. I need a small notebook to jot things down. That’s it for tonight, I now have to find a way to get from the couch to the bedroom. 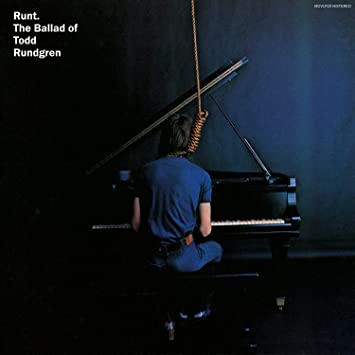 Music today has been Runt. The Ballad of Todd Rundgren (1971) and the second album from this multi-talented insufferable maniac (so legend has it). He must have wondered why Prince was more popular than him but then he seems to be more of a thinker than a natural showman. I saw him once in LA, he was solo and he had lost his voice and couldn’t sing properly so spent the whole show fiddling with these new devices called computers, ahead of his time, always, but not exactly doing the splits in purple flairs.

For all the great music on this second album (like the first), there are a couple of interesting unmusical things about it. The front cover design is by Milton Glaser who designed the I Love NY logo (the one with the heart). The inside cover and pics were c/- Sparks’ Ron Mael in the early days, son of a graphic designer and continuing in his footsteps before he found fame and fortune with brother Russell.

OUT NOW 👣 Afridi/Willson-Piper present HAND IN