Malmö, Sweden, on stage, playing a gig, an appreciative audience, ringing guitars, riffs, drums and bass and Mellotron, we are at it again after all this time. We left Stockholm and tore through the Swedish countryside on a 7-hour journey to Malmö where we were playing in what was once a church. Nice people greeted us along with the sun, we unloaded and set up on the stage. I can’t lift anything that puts pressure on the thumb area of my hands but luckily playing the guitar doesn’t seem to be a problem. Soniq Circus went on before us although I didn’t hear them. My MOAT partner Niko came to the show with friend and fan Thomas and I was happy that Niko liked the show as it’s as different to MOAT and his band Weeping Willows as can be. It’s as different as any music I have played too but the challenge, the music, and the people I play with make the whole experience a joy, despite its complexity and tricky twists and turns.

The whole experience of being at a gig again, playing music to people who have come out to see you is thrilling. Standing in front of a pair of amps with a Fender Stratocaster ripping through the riffs, playing parts and solos, power chords and dynamic builds, weaving in and out of Nicklas’ guitar which I have through my monitor. I like to hear Pete’s bass drum and the hi-hat with Nicklas’s guitar – anchor points to play to. Jan Erik’s bass cabinet is next to my amps so I hear him on the stage but I do miss Anna Sofi’s Mellotron, I need some of her in the monitor too because she is on the opposite side of the stage and I just can’t hear enough of her. She’s on stage with a real Mellotron, how often do you get to play with that instrument?

After the gig people were complementary, there was one guy from France, a couple from Denmark as well as the Swedes that made it out to see us. Which reminds me, we were on the train today on the way to meet the van in the suburbs. At the ticket office, a woman was speaking English and a man was waiting for her. “Are you on holiday?” I said. He said they were and told me they were Finnish. I told him “Minä rakastan sinua” (I love you), he was only slightly bemused. I told him I was a 22-Pistepirkko fan and he said he didn’t know them so I asked what 22 was in Finnish and then he knew exactly who they were.

It was cold outside and we were happy for the big coats. Olivia and I were marvelling at a girl who walked into the underground in a short dress, tights and a light jacket, why wasn’t she freezing to death? Is it fashion? Or do some people just not feel the cold as much as others? I suppose there are different reasons for everything. There are different priorities and young people like to look cool sometimes at the expense of their own misery, haha. It’s not just young people though, the pain of high heels, collar and tie, shiny new shoes and compliance to the peer group is a challenge that people take up every day. If you looked like Olivia Newton-John (girl next door) and loved black metal you might not quite make it down at the local doom bar without the hours of working on your look. 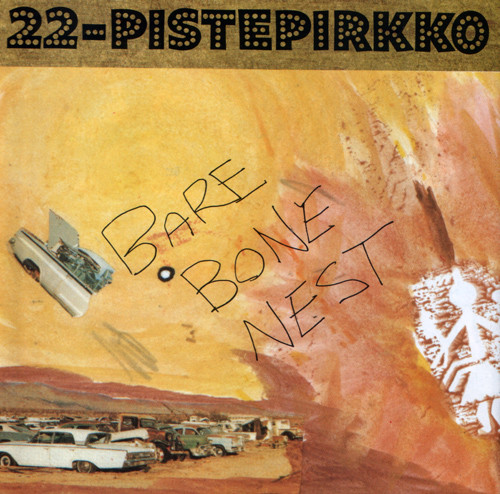 Music today has been Bare Bone Nest, 22-Pistepirkko’s third album from 1989. I saw them live twice, both times in Sweden. Once in the smallest club in the world and once on the main stage at a massive festival, they were great both times. They’re hard to describe, they make a unique sound whilst being swampy, sometimes sixties and sometimes moody but always alternative. A strange voice comes from the throat of singer P-K Keränen. His brother Asko Keränen is on the bass and drummer Espe Haverinen might be playing drums and keys at the same time. Check them out.