After the FA Cup semi-final at Wembley between Liverpool and Man City, Olivia and I decided to get out of the house and hit the city. A short walk from our place, we were soon mingling with the Easter tourist revellers. The city was busy on a lovely warmish holiday Saturday, although for some reason someone decided that Friday and Sunday and Monday are Easter holiday days, but not Saturday, for example, the pool was open this one day whilst being closed the other three, can’t they just give the staff all four days off instead of making them come back for one day in the middle of it all?

The city was buzzing, different languages, French, German, Spanish, English being spoken by passers-by. We picked up a takeaway coffee and headed towards the river. We dropped in at the music store on the way to say hello, super cool guys in there. We always find something to talk about, bands, guitars, amps and pedals. There was a guy they knew in there from Angola playing a small drum. He was actually a jazz guitar player – musicians chatting. From there we went to Dance Planet down the block and spoke to Miguel, my contact there, trying to find some splitter leads for the pedalboard. Apparently (musicians) you can power two 9V pedals from one 9V source on the power pack. I think it’s something about milliamps, whatever they are. The reason to do it is too many pedals for the power pack outputs (are you still with me?). It’s expensive to have two high-quality power packs and they have to be the right thickness to sit underneath the pedalboard framework. Nerds ‘R’ us. 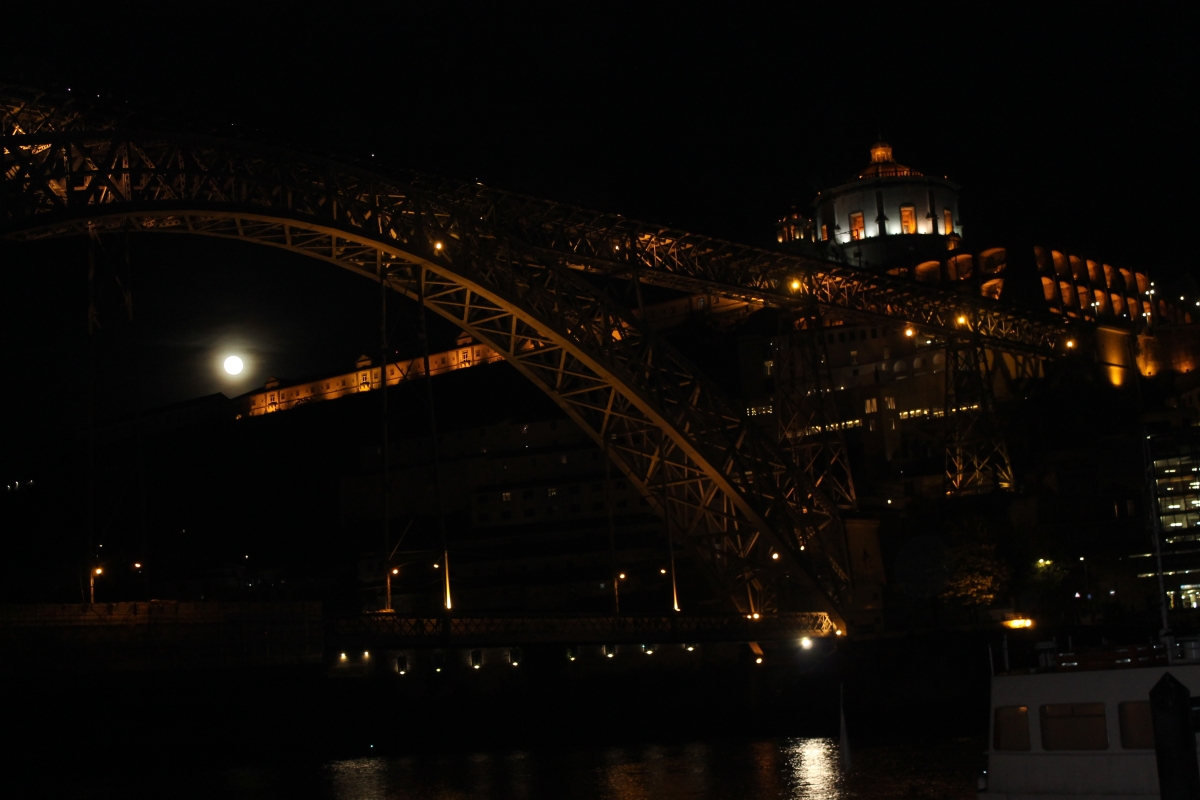 We made our way through the crowds, down past São Bento station, experiencing Porto as a post-pandemic (I hope) tourist destination. We crossed the road with the masses, heading down the steep inclines until we stopped off at a special place we like that makes all kinds of gourmet empanadas. Further and further down until we came to the waterside, thronged with people. We sat and watched the moon climb up above Ponte Dom Luís I and shine full between the iron girders. I tried to take a photo of it but the moon so bright flared out and lost its perfect circular shape. I’d need some pro photographer training to take this pic. 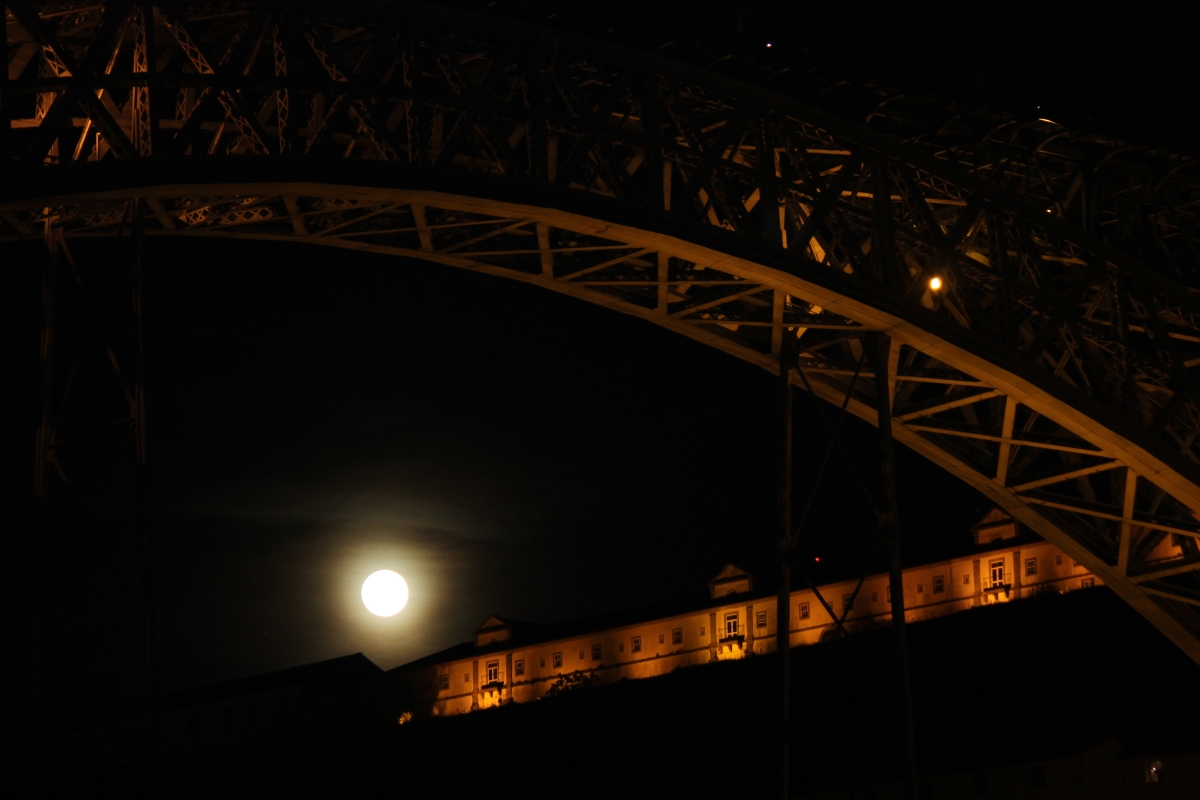 We sat down there by the river on a bench listening to a Portuguese singer-guitarist play touristy songs in one of the open-air cafes, his guitar too thin and his repertoire hackneyed. At one end of the river restaurants, a circle of people singing along with a busker, a song in Spanish, some dancing and at one point he stopped and they all clapped in time and sang the song without musical accompaniment. It must have been a popular song in these parts unless everyone here were Spanish tourists. Other buskers here and there on the street, one guy in Santa Catarina playing a double-bound Telecaster through an amp that sounded really good, singing a song I didn’t like, really well. Further down a Brazilian singer with a posh little mobile PA that was too bassy singing and playing guitar. 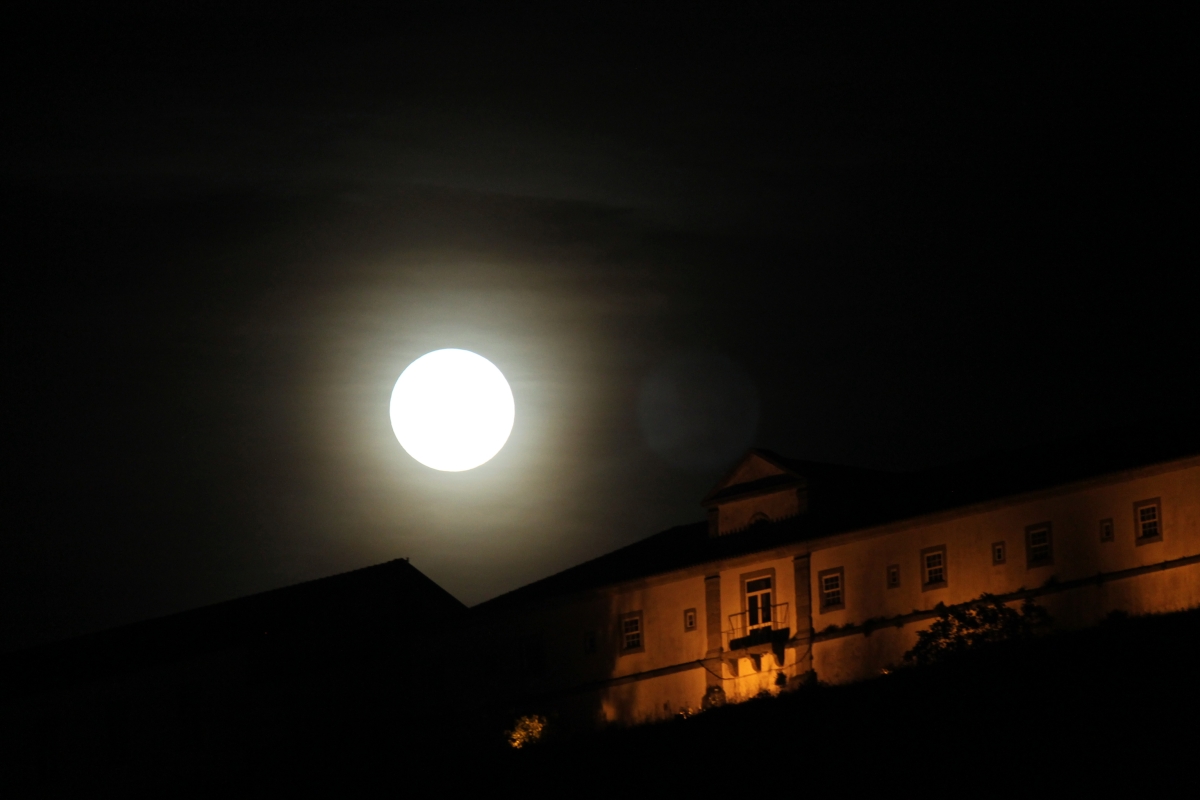 The night chill was coming, so we headed home eggless. The streets were still busy at 10 PM and I wondered about the bars and the nightlife that we don’t frequent. We were asked twice whether we wanted first ‘hashish’ in a very dark and cliched tone by the river and marijuana past São Bento. “Yo vivo aqui,” (I live here) I said, and he gave me a gesture of, ok, you are not my target.

As we walked up the streets towards home, the people thinned out (they were fewer, not thinner). The ice-cream shops in Santa Catarina were still open and Olivia treated herself to coconut and hazelnut scoops in a cone. It got quieter as we got closer to our end of the street, one of the ladies of the night wished us a “Boa Páscoa” as I wished her a Happy Easter. We got in and listened to one of my playlists with Olivia playing along, practising the mandolin to all the songs. 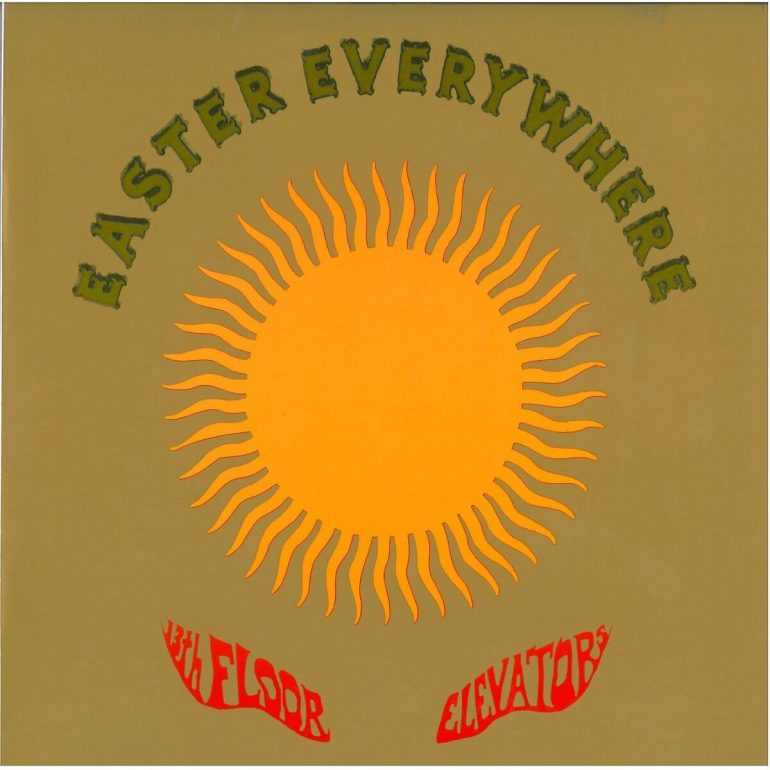 But having said that in keeping with the Easter weekend (despite Saturday apparently having little significance), music today has been Easter Everywhere (1967), the second album by the legendary psychedelic 13th Floor Elevators.