A strange day of beauty, breakdown and accident. The sky was the deepest blue, a colour so rich that once you looked up it was hard to look away. The sun powered down, waves of heat, promising summer, but in the shade, the chill remained as if the forces of darkness and light were in battle, it was then I realised that light always wins because darkness can only rule with a grimace and discomfort is always eventually exposed by history (Tangent). The buzz of the street was interrupted by the blare of a siren, so loud, a medical car of some sort, tearing by. It stopped one block ahead of me but kept the siren wailing. I had my fingers in my ears until it stopped and three people got out of the vehicle, opened the back and dug out all kinds of equipment. I didn’t see where they went after this as I moved on but it seemed like the flight through the street was way faster than their getting out of the car with their equipment and saving whoever it was that needed them.

At one point in the gym today I found myself the only person in there, no trainer or people. Staff have taken advantage of the holiday period and taken extra days, so three different replacements were in there today for short periods, including the boss. I weighed myself to find I’ve now lost 10 kilos in 10 weeks, no pool tomorrow or Monday because of Easter and then next week Friday has me flying to Sweden to play three shows with Anekdoten which in turn means no fitness routine (apart from the fingers and the brain) and no seshes as they will clash with shows and rehearsals. I’ll be back May 4th.

I thought I should stock up on psychedelic fruits and vegetables at the psychedelic psupermarket as it was Easter and piled raspberries, papaya, lime, carrots, cauliflower, broccoli, celery, arugula and radishes into my basket, doing my best to replace cake and chocolate, coke and muffins, croissants and bread with richer fruits of the earth. Two Romany women were shopping and asking for money as they shopped. At the till I saw they were short and had to leave something behind, the cashier had little patience for them. They seemed so unaware of people around them in constant conversation in the queue, they really seemed to live in another world. Only engaging with others to ask for money as if any other form of communication with the people were impossible, outsiders.

On the way home, the bags were heavy but the day was glorious and I strolled along the street staring upwards until another emergency truck started to wail. There were two cars in the middle of the street, crashed into each other, it looked like a prang but maybe it was more serious as someone was whisked off to hospital. Next to the gym and pool is the main fire station and you often see the firemen (not naked) standing in lines like soldiers, except much more fidgety. Sometimes they have axes in their hands, bearing them like rifles. I suppose this is training but they seem more like distracted schoolboys at assembly than disciplined firemen. But they’re all young, like the ones in the showers, and you have to remember that at some point they will be risking their lives to save somebody, so you cut them some slack, it isn’t the army.

I finally dawdled home, opened the street door and walked up the steps to the lift. It was dead and both lifts had no electricity. I began my ascent to the top floor with the heavy bags, the gym bag. I had a two-hour workout session, shop and walk behind me…I thought I was fit. Third floor I was struggling, fourth floor I had to stop to catch my breath. When I finally made it to my front door, unlocked it and put all the bags down, I noticed that the electricity must have gone off and come back on again because the music that’s usually playing (some great playlist), had stopped. Then I noticed that there was no water.

Olivia was out and I had a sesh with Brian in New Jersey. I made a cup of tea with bottled water and ate late lunch trying my best to avoid getting covered in avocado, olive oil, and freshly squeezed lime juice with no water to swill my hands. As Olivia returned home the toilet gurgled and finally, after dinner, the water came back on. There was something in the air today and it wasn’t Thunderclap Newman. 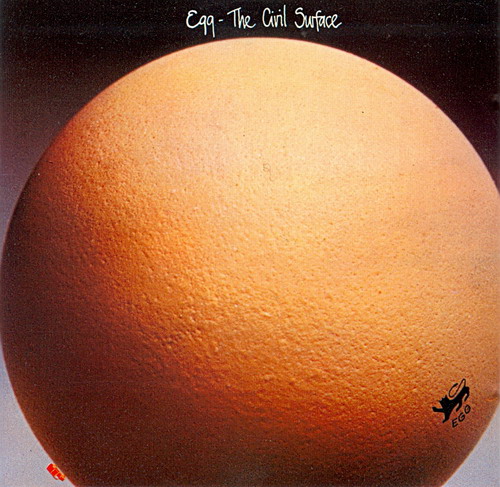 It’s still Easter so there is still room for another egg. Egg had split up and Dave Stewart joined Hatfield And The North, through this connection Stewart managed to get a deal through Virgin Record’s subsidiary Caroline for Egg to record their unreleased material as a farewell album and so The Civil Surface was released in 1974. Steve Hillage guested on one track bringing the original members of Uriel/Arzachel together one last time (you have to read the history).