Walking into the changing room today was a kid about 14 wearing an AC/DC Highway To Hell T-shirt. That album was released in 1979, 43 years ago, around 30 years before he was born. It’s like me wearing a Glenn Miller T-shirt or more like a Louis Armstrong T-shirt, maybe a Duke Ellington T-shirt if such a thing exists (it does). In the street today a girl was wearing a Metallica T-shirt. The heavy stuff endures. It’s not unusual to see a Ramones T-shirt. I wonder how Marky feels (he was the drummer in the band from 1978 replacing Tommy). All the members on the shirt are no longer with us but Marky is. You see Beatles T-shirts but I don’t remember seeing a Stones T-shirt recently. I’ve seen Led Zep, Def Leppard but I imagine that band T-shirts might not be worn by the young’uns so much. You only really see a lot of band T-shirts at gigs, not so much in the streets. You’d be hard-pressed to spot an Echo & The Bunnymen T-shirt or a Cocteau Twins T-shirt in the street these days. But I guess someone is wearing a Dua Lipa shirt or a Beyoncé shirt although I can’t remember seeing one. I’m going to keep my eye peeled as the weather gets warmer, to see what music people have on their chests.

Looking down from the gym today, trainer Ana and I were admiring a woman who was a magnificent swimmer. I met her husband Brian the other day (retiring from Idaho), he told me she holds world records in her age group. Watching anybody doing anything well is a wonderful thing. I suppose there are experts in every field from the complex to the simple.

I suppose all brain surgeons have to do excellent work, haha. No room for lazy work, shortcuts or getting out of the operating theatre as quickly as possible. I wonder if there really are any dodgy brain surgeons, brain surgeons that do a messier job than others? It seems there are dodgy plastic surgeons. There must be bad pilots and terrible firemen. We just hope they don’t cross our paths when we need them to be good.

On the way back home today there was a woman shouting at her dog and pulling him back strongly by his leash because he was pulling enthusiastically, I mean, he’s a dog and not only was he a dog but he was a black labrador. As she passed me I said, “Aww, stackars lilla perro”, which was me, an Englishman, speaking Swedish and Spanish to a woman in Portugal (“poor little dog”). She got the message of my sympathy for the dog and although she didn’t exactly scowl at me, I got ‘the look’. This made me realise that whatever language skills I have might be best used by speaking four languages at once and using words in the language that best describes the situation I’m in. All languages have appropriate words that don’t quite translate, it’s why we say ‘déjà vu’.

Talking of dogs, Dogman was talking to one of his dogs today. I think he was trying to get it to come towards him but it was looking at him like he was mad. It’s not often you see the dogs up and about, they seemed so disciplined, always sleeping but not so disciplined when they are awake. And before you ask, yes, Bellyman was there too, thankfully still covering his belly in a chilly breeze. 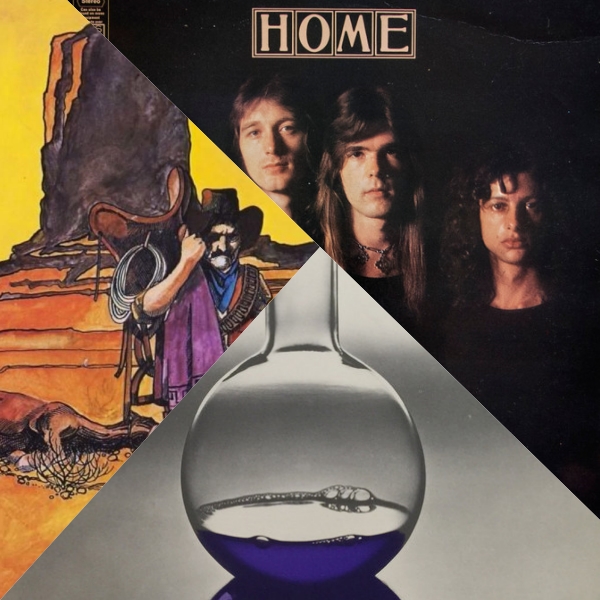 Music today was another H band, for some reason, but like Heads Hands & Feet and Help Yourself, it seems like Home didn’t make that much of an impression on history despite making three accomplished albums (I posted the cover of their third and perhaps best-known album The Alchemist last year). Oddly that one isn’t on Spotify. Today I listened to Pause For A Hoarse Horse (1971) and Home (1972) on Spotify and The Alchemist (1973) on YouTube. Guitarist Laurie Wisefield replaced Ted Turner in Wishbone Ash for their album There’s The Rub (1974). Original bassist Cliff Williams replaced Mark Evans in AC/DC for their album Powerage (1978), the album before Highway To Hell (1979), the one the kid in the changing room was sporting.