The wind bit hard in the shade, I needed a lip balm after being out, but in the sun it was warm, it’s spring, one foot in the winter, one foot in the summer. Again, Dogman’s dogs were all curled up and asleep on the bench in the Marquês square. There was a teenager alone on one of the benches that faced the sun, staring thoughtfully into space. The trees are flourishing, the birds are no longer standing out on naked branches but are slightly obscured by new leaves, their bench below still covered in last night’s dinner. As I passed the fountain, the wind blew water into my face and legs, the water’s surface rippled and shook. I crossed the square and waited at the traffic light beyond so I could walk on the sunny side of the street. There was a man standing like a living statue, still, but slowly moving. The way he was acting, it looked like a heroin rush. I’m not sure how he managed to stay standing up. Porto is famously a safe city but Olivia’s violin lesson was cancelled because her teacher was hit on the head and robbed, we are waiting to hear the details.

I was talking to a guy at the pool today, Brian from Idaho who has just retired with his wife to Porto, they bought a flat in the centre of town and have lived here for two weeks. As I’m 64 next month, I’m imagining that if I’d been a businessman and not a musician, I might have found myself here anyway. Retiring to southern Europe is a real thing, Brian asked me if I’d retired here, I told him musicians don’t retire. But then I saw a short video clip of Phil Collins on stage in London telling the audience from a chair on the stage that this was Genesis’ last show. But you could see that there was no way he could carry on, he looked very old and he has been in a lot of pain in recent years, he’s retiring due to health issues. He can no longer drum and if you knew his history as a musician, beyond his commercial side, just his pure drummer skills, you would know what a tragedy that must be for him. They say he is worth 120 million pounds but I imagine he’d give it up for his health, he is just 71 years old.

I rehearsed with Nicklas in the early evening, going over the details of Anekdoten songs. I had to cut my nails, psychedelic progressive metal rock is equally hard to play as punk rock with long nails, either way, you can’t push the strings down onto the neck if your nails are too long. There’s a woman on the checkout at the psychedelic psupermarket who I suspect doesn’t play the guitar, her nails are long and painted in all kinds of patterns, I can’t imagine how you could do everyday things with nails that long? Fashion is the answer.

On the subject of fashion, I have new shoes and they are killing my feet but I have to break them out to break them in. I’m really not looking forward to strapping my feet up with plasters (band-aids) on my heels and other spots on my feet every day for two weeks. My shoes are Blundstones and they are an Australian shoe and they used to be made in Tasmania I believe but now something has happened to the company and I remember that I used to buy a new pair and wear them out of the shop and they didn’t hurt my feet. Is it a quality issue, is the fit worse? Have the company left behind their quality control? The sacrifice of principles for progress. Or is it my feet? After losing 8kg, perhaps my feet will fit better into the shoes? How much weight do you carry on your feet? We’ll see. 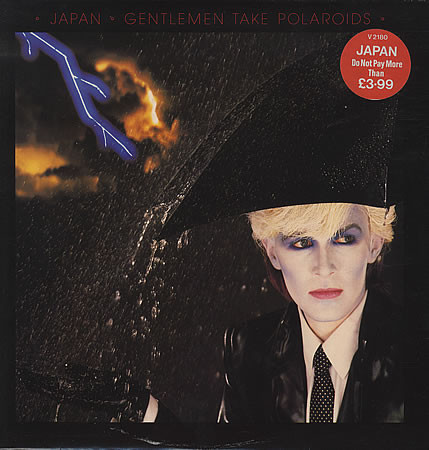 Music today has been Japan’s fourth album Gentlemen Take Polaroids (1980). Nicklas and I were talking about the song Visions Of China from Tin Drum (1981) but I picked a different album from their catalogue to listen to today. At first, I thought he was talking about Turning Japanese by The Vapors, haha, quite a difference.