Up at 8 AM, what? There must be a really good reason. And there was, they were switching the water off at 9 AM to clean the pipes, so I thought I’ll get up early and beat the water switch off at the tap. I had my alarm set for 8.30 AM but woke up half an hour before because when you have to do something like this, you just know even when you’re asleep that responsibility is pending – self-imposed today but there was also a plan. So I beat the water switch off at the tap and left home at 9.30 AM, checking the tap that was being switched off at 9 AM to find it was still running. Ah well, better that than sleeping through my alarm. I went out into a street that was waiting for rain. Gerd (Olivia’s dad) is staying at an amazing hotel, Castelo de Santa Catarina, just a few doors down. Originally a mansion for a textile entrepreneur it was converted into a hotel and at this time of year is just 60€ a night. We went and checked it out, dig the pics. This is what millionaires do with buckets of cash.

As I walked past the hotel grounds, Gerd appeared at the gate. I am never up at this time and Olivia’s dad isn’t always here obviously, but we silently and coincidentally found each other in the street. We chatted for a bit and went on our way, me to take my leaky goggles back (again), Gerd to the photo museum which is in an old prison. After the goggles, I went to the second-hand store and bought a VHS player, the music store to ask about getting my Space Echos fixed, the record store to ask about Aldous Harding’s new album, Warm Chris (2022) and the camera store to finally get my camera back after nearly two months of waiting. From there to the pen store to buy a pen and then back home as it started to rain. Lunch and wondering was that my exercise for the day or should I hit the gym?

So I hit the gym for two hours, the psychedelic psupermarket (again) and walked home in the rain (again). Gerd and Olivia were out so I lit candles, closed the shutters and put on Abbey Road (1969), I thought Gerd might like to come into a house playing The Beatles. They came home, Olivia cooked and we chatted over dinner, always interesting with Gerd as he’s a scientist. One thing that came up is what’s the story with Pluto? One day it’s a planet, then it isn’t a planet and then it is a planet again?

My body got a workout today so I’m aching to go to bed as early as possible. Somehow I managed to listen to Ian Carr’s Nucleus – Roots (1973) and Elastic Rock (1970). Ian Carr was a trumpeter playing in a jazzy band from the late sixties, making an album in the seventies and morphing into a jazz-rock ensemble as the decade grew. Sometimes I want to listen to music without a singer, although the second track on Roots, Images, does have singing.

Gerd left after dinner and I had a sesh with Jeff in Ohio, always a fascinating chat with Jeff. That brought me here and here is – go to bed. 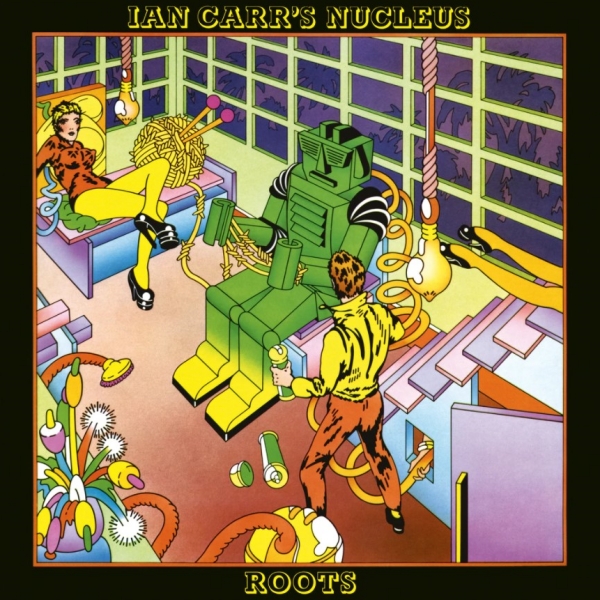 So music today has been varied (I left Olivia with the first Blackfield album, 2004), but my album of the day has been Roots (1973) by Ian Carr’s Nucleus because you might have heard of Abbey Road (1969). Jazz-rock alert.