I shrank down really quite suddenly. I had expected something but then again you never know with witches. I was able to crawl under the lip of the carpet and was lucky not to choke to death on the dust. I had to get under as quickly as possible because the cat had been sitting on my lap and sprang off as I began to get smaller. Initially, she ran off but poked her head around the corner of the door in the final stages and suddenly I was prey. Didn’t she remember me feeding her, cuddling her, taking her to the vet to get her teeth scraped? Under the carpet, I felt the pads of her paws coming down from above and realised that all I could do was keep still. Eventually, she walked away and as soon as I felt it was safe I crawled out and looked up at my chair. I calculated that I was less than half an inch tall and I immediately remember the film I saw from the fifties called The Incredible Shrinking Man (1957) where Grant Williams sails through a strange fog on his boat and slowly but surely begins to shrink. In his case, the shrinking didn’t stop whereas in my case it was a simple witch’s prank.

Like Grant, I suddenly became aware of the dangers of marauding spiders and the thought of being devoured by such a monster sent shivers through my bones. I wondered would the spell wear off or did the witch have to break it? I ran from the edge of the carpet to the hallway door and tried to imagine where the safest place might be and how long I would be in this state before the spell hopefully wore off. I glanced back, I looked left and right at the door and straight ahead of me coming at me fast with infinite legs was a centipede. I wasn’t sure if centipedes ate shrunken people but I turned and ran anyway back into the front room. I don’t know if you’ve ever been chased by anything with multiple legs but I can tell you it isn’t a pleasant experience. I ran onto the carpet this time thinking that a centipede might be able to get underneath and saw my acoustic guitar like a skyscraper on its stand. It was the one with the tape so I was able to scale the body and swing first onto the bridge and then disappear into the soundhole. The centipede had lost my scent (if that’s how they hunt), maybe it just didn’t see where I went (if they have eyes).

My fall into the body of the guitar was cushioned by some acoustic wool that I’d put in there to stop feedback at live shows. Luckily I didn’t have a rubber feedback buster or my escape would have been barred and I’d be the centipede’s feast. Inside the guitar, at the heel of the body, I noticed that there were two lost giant plectrums and three broken ends of guitar strings that had fallen into the body when a string had broken and the bridge peg was removed to put in a new string. I immediately realised it was a perfect weapon should I be faced with any more household monsters. I sat there out of breath, two outsmarted predators to the good. But what next? I heard footsteps, two firm legs rather than the scratchy rush of speedy insect legs or the pitter-patter of paw pads on the wooden floor.

The footsteps stopped, my little ears couldn’t hear breathing but my senses recognised contemplation and then I realised that of all the guitars in the room the witch unknowingly decided to pick up the guitar in which I was hiding.

I was shaken off my feet, my weapon slipped from my grasp and I was thrown headlong the length of the guitar. I lay there for a second, dazed, before suddenly pain hit my ears, a great raucous rumbling sound, it was the strumming of an E major. It sustained around the inside of the guitar and as it faded I quickly broke off some of the acoustic wool and placed it in my ears. If she played a song I would literally be deafened to death, my skin would shake from my bones and I would die there a shrivelled unrecognisable corpse. I had to think quick but then a plectrum fell through the soundhole and landed close to me in the bottom of the guitar. I knew what was going to happen next.

I felt the guitar being turned so the soundhole was facing the ground and the shaking began. I was being rocked from side to side and up and down as if I was in a boat and eventually found myself holding on to the strings from the inside of the guitar, and then it stopped as two of the three plectrums and my weapon fell out onto the floor. The guitar was returned to its normal position on the witch’s lap, she went to strum another chord but because I was holding onto the strings I was acting as a dampener. The witch was obviously confused as she looked at the neck, the nut and the bridge and couldn’t see anything that would hinder the sound. Then she looked at the strings and saw me hanging there on the inside of the guitar and shrieked a sound so awful that the cat and the centipede ran into corners, she dropped the guitar and I became dislodged from the strings and I rolled out onto the carpet. She stamped her foot down to try and squash me but I was too quick and I could feel that something was happening in my body, I was starting to grow again. “I should have known,” she screamed, “Only an E major on your guitar from one of your own songs could resurrect you.” “You bet,” I said and I picked up the guitar and started to play To Where I Am Now until like The Incredible Shrinking Man she shrank and shrank until she disappeared completely. 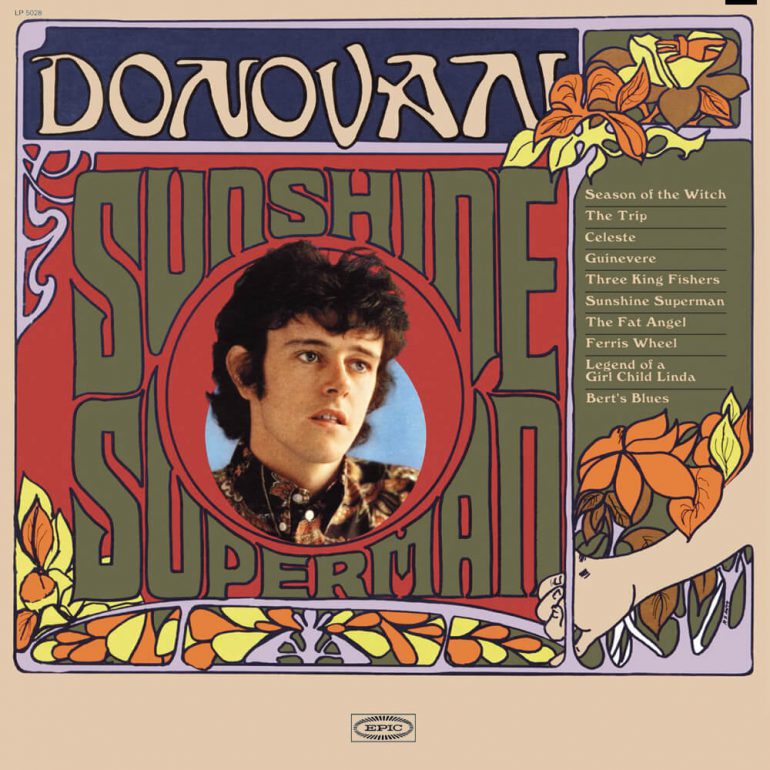 Music today has been one of my New York 2016 (3rd July) Radio Show two hour sets and although a Donovan song, Legend Of A Girl Child Linda, was on that show I thought it might be more appropriate to feature Season Of The Witch, which as it happens are both on Donovan’s third album Sunshine Superman (1965).