I saw a metallic beetroot VW Beetle today and I was thinking about the invention of colours. There are the primary colours and then there are the blends and the blends make metallic beetroot VWs. When I was a kid I had Airfix model kits and I remember painting the underneath of one of the planes with a colour called duck egg blue, which actually looked like a very pale green – to me, because people see colours differently. Then there are people who are colour blind. How do you describe red to someone who doesn’t have it on their inner paint palette? But then how must it be to be blind from birth and never have seen any colour at all? While you ponder that profound thought, I’ll try and figure out if duck egg blue is actually blue or green? I checked, it seems it’s bluish-green which is why the underneath of planes was camouflaged with that colour because they blended into the sky and the sea.

While I’m on a tangent, who discovered that melted sand made windows? It seems the Egyptians used glass in jewellery 3,500 years ago but the amazing thing about glass is that it comes from sand and becomes a liquid heated up and all those household goods and windows we take for granted when it becomes solid and is shaped. This from the net: “The exact composition of glass may vary to meet specific applications requirements but the most commonly used type of glass, soda-lime glass, is made of silica sand, soda ash, limestone, dolomite and glass cullets (recycled glass). Additional materials such as iron oxide or cobalt can be added to the mix to give a green or blue colour to the glass.”

Who figured out how to make a lightbulb? Glass with elements inside that lights a room. Incredible. I mention this because I dropped in at the light shop today to see if Rui had the latest batch of lava lamp bulbs, he didn’t. On the way back from the pool I kept on thinking that I’d forgotten something? I did actually forget my phone today but it was something on the way back. Then I realised I wasn’t carrying three heavy bags of shopping. I seem to always be in the psychedelic psupermarket, who wouldn’t want to be in such a place?

Gerd, Olivia’s dad picked up an amp I bought on eBay from a guy in Cologne (Köln actually). It’s a Fender Hot Rod DeVille, 4×10 speakers. It’s the amp I use with Anekdoten and I wanted one here in Porto, especially while I wait forever to get my gear from England. We wait, the Portuguese consulate has had our paperwork for a month and we’ve heard nothing, it’s so frustrating. But at least I’m not being shelled, Russia invading Ukraine is like America invading Canada. Insanity.

Tonight, over and after dinner we finally watched Part 3 of The Beatles’ Get Back. We saw the Apple Scruffs on the steps in the rain, one of which is our friend in Cornwall, Sue W. née Ahearne. We marvelled at the clothes and the skills of the sound engineers, Glyn Johns, George Martin overseeing it and tape op Alan Parsons who went on to engineer The Dark Side Of The Moon and made a career for himself as an artist with The Alan Parsons Project. We saw the wives and the girlfriends, kids, road crew, Mal Evans, The Beatles’ road manager who was tragically shot and killed by the American police at the age of 40. We see the fun, the joy, the confusion of the rehearsals, the rooftop concert and the police arriving who look like teenagers. Sadly we see Maureen Starkey and Linda McCartney who we have lost, we see Billy Preston who we have lost and John and George who we have lost in awful circumstances. But what we have is the amazing chemistry of John, Paul, George, and Ringo, their humour and their music which lives forever. Olivia is listening to Abbey Road (1969) and Let It Be (1970) in the other room. 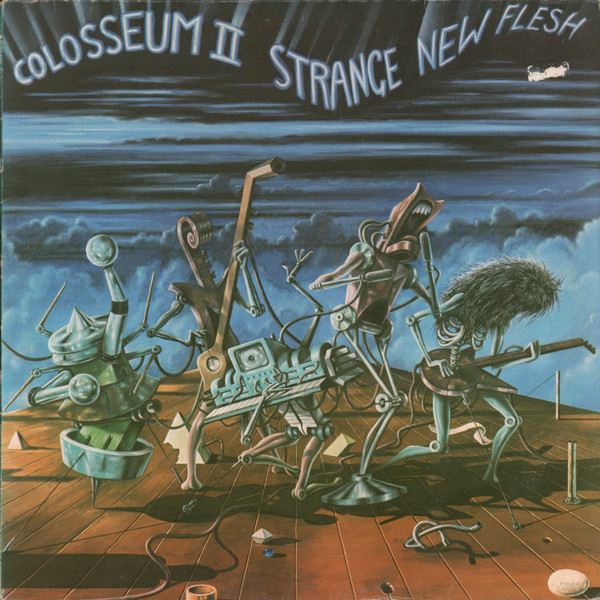 Music today has been Colosseum II’s Strange New Flesh (1975), a progressive jazz fusion supergroup that drummer Jon Hiseman formed after Colosseum broke up. It featured Gary Moore on guitar, Neil Murray on bass, Don Airey on keys and the unknown Mike Starrs on vocals. It’s hard to find progressive jazz-rock fusion friends who also love The Only Ones, I know you’re out there.