A friend from my Dallas crew, Mati Vargas, died Saturday morning, too soon after an illness. A wonderful person, music lover and cool cat. Clever, friendly and kind, she once helped me get the rights for a Frida Kahlo painting to use for a future album cover. These days Frida Kahlo is so hip that it would be a coup to use it. The loss is hard to take for such a person, all her friends just hope that she gets to have an eternal browse in the great record shop in the sky. RIP Mati, love from Earth, see you in the A’s.

Up early today for a Tony sesh and listening to the sixth song for the album we will be making. But today was Liverpool vs Chelsea in the League Cup final and what a game it was. Space Summit Jed was my 6 PM sesh but he was watching the game too so we had to postpone till later in the evening as the game went to extra time. No spoilers. I had a sesh with Abby and Nick in Phil at 8.30 PM so busy in between the final. Brian, whose album I’m supposed to be listening to, was watching the game too, haha, hopefully after my sesh with Craig in Atlanta tomorrow I can finally concentrate on the task at hand.

I had the window wide open till 8.30 PM tonight but with the seshes and the football, I didn’t get out. There have been anti-war protests in Porto as there has been everywhere in the world. Nuclear alerts! Really? Insanity prevails. Where will it end? The other day I woke not to the drilling but to the sound of a march and voices through loudhailers. I couldn’t imagine that I would prefer the drilling but anything in exchange for peace.

So I continue with my life although others can’t continue theirs. Mine is music, my own and helping others with theirs. Keeping up with the daily languages and the fitness as well as taking my fingers to the gym independently for exercise so they can play the Anekdoten songs. Today with Space Summit Jed we continued to use Logic which we both have to work on songs. I prepared a whole backing track for Jed to write to and he sent it back to me with his ideas. Then I added to it what I thought it needed and sent it back to him. It’s really easy when you know how but isn’t everything, except perhaps learning to write Armenian!

I wrote a short musical piece today in between it all. I have a recording system that reassembled could fly to the moon but I only really need it to make it to the couch. After all, many great songs are written on the couch. Logic Pro on a simple level allows you to get a version down of your song, guitar and voice and then experiment with bass lines, beats, keys, solos, harmonies. Interestingly these days so many people seem to want to work with beats first and then write the song over the beat. I prefer to write the song and come up with the beat the songs need, kind of like a digital Ringo.

I had my Nash Tele out tonight. Olivia was explaining to Abby and Nick how a violinist only needs one instrument, guitarists need many instruments for different sounds. Even Rory Gallagher who had one main guitar had an acoustic and a Dobro. My Tele does something else, something different to my other guitars and it’s like cooking, different spices. 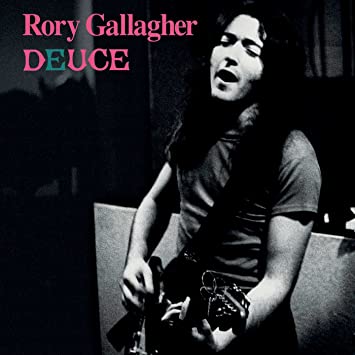 Music today has been Rory Gallagher’s second album Deuce (1971). This from Wikipedia:

Johnny Marr of The Smiths said in an interview: “There was one day when I was playing along with the Deuce album which was a complete turning point for me as a guitar player” and critic Dave Thompson says the album “peaks with the closing, broiling ‘Crest of a Wave’. With bass set on stun, the drums a turbulent wall of sound, and Gallagher’s guitar a sonic switchblade, it’s a masterpiece of aggressive dynamics, the sound of a band so close to its peak that you can almost touch the electricity”.