For all you budding singers, songwriters, musicians, producers, engineers, you can do so much these days at home on your computer – so you should. Today sessioneer Craig and I took it one step further with me producing Craig’s lead vocals on a song he was singing at a studio in Atlanta, Georgia (Thanks, Gopal for engineering and making the tech side work). Can you imagine that this is even possible? It’s a long way from how we used to do it and although I’m looking forward to getting back into a real studio and recording songs as a band, this world of computers is another way of doing things and all ways are relevant, it’s the ideas that count. After a mega Logic Pro learning session yesterday we got up late, AAE Andy called and by the time Olivia was up and ready to go out to play with some people she’s met in town, it was time for closing the shutters, drawing the curtains, lighting the candles and the Craig sesh was here. It’s swim, music, languages, studio, write, sleep, repeat. Although getting Covid and then getting busy has had me away from the pool, I’ll be back next week, Portuguese cake has to be offset.

I looked at some of the material I’ve been recording and spent part of it trying to figure out why I couldn’t hear the drums? This is the learning curve (the guitar was on ‘solo’), but it isn’t obvious if you haven’t done this before, like anything. I imagine that building a house, laying the bricks, would be quite tricky if you didn’t have any experience. For me, as I stated yesterday, I’ll leave the proper job to the experts, this is just a posh tool for writing songs, trying out ideas, collaborating with others and it allows you to figure things out, expand your idea, find another guitar part, a bass part – it’s pre-production by demo. Of course, you can’t beat the magic of what happens when a band with chemistry get together and jam it out but we take what we can get in this modern world and as long as the inspiration is there, the tools will take it somewhere – you’re not always sure where.

As you know I went to Liverpool and played guitar on the next Wild Swans album, then Covid hit. The album is called Flowers Of Sulphur, no release date yet but if there’s any movement I will let you know. In the meantime Paul Simpson (the man) has a book out called Revolutionary Spirit, you can pre-order it here. I see the Brix Smith et moi album has been arriving at people’s homes. Good to see and on yellow vinyl, too! If you are wondering what has happened to the Jerome Froese et moi album, we have a meeting to finalise the deal next week, but the audio and artwork are done. If you are wondering what happened with the Salim Nourallah album, there’s an EP coming soon, will keep you posted on all these. Afridi/Willson-Piper should have a second single out this month. Other works in progress are Arktik Lake, Space Summit 3 after Space Summit 2 demos are done, the vinyl of Space Summit 1 is coming but we are all stuck in a terrible queue like the trucks at Dover. Sessionneer projects are coming together and as they get closer to actually starting records I’ll let you know who, where and when.

It’s Bandcamp Friday, February 4th, which means all music and cloth sold won’t be commissioned by Bandcamp. The times when this is relevant are from midnight to midnight Pacific Coast Time. We haven’t added anything to the choices because everything new is in the process of being made, but there are still some cool things available. 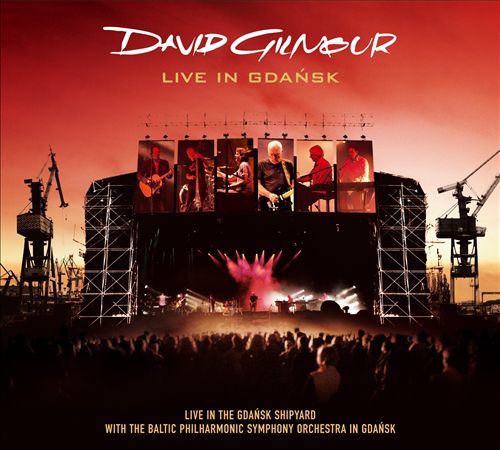 Music today has been David Gilmour – Live in Gdańsk (2008). Somebody mentioned it the other day so I thought I’d listen to it, it’s been a while. I bought the big vinyl box version when it came out, it’s a really lovely album with a collection of tracks from The Floyd and Gilmour’s latest album release at the time, On An Island (2006). And by the way, when I was playing with Anekdoten in Poland, Olivia and I stayed a few days extra and we went to Gdańsk!