The future is upon us but initial disbelief and amazement at the wonders of the latest gadget soon turn to an expectation that said gadget functions without issue once you have it in your hands. I was a confirmed adult into my thirties before I had a computer or a mobile phone and the internet came even later than that. If you were born in the 21st century you might be horrified if you had no signal on your phone or no internet connection but surprisingly if you were born in the fifties like I was, an era of nothing digital, you might be equally frustrated. So it’s an expectation, it’s what’s written on the box and we take it for granted even though we remember a time when it was a wild dream to speak to someone in Australia on a video link for free (Skype, Zoom). How quickly we get used to these conveniences. Strangely we easily accept the lesser quality of some things for the sake of convenience, audio being the most obvious, whilst interestingly we become less and less accepting of lesser quality video, so, “The eyes really are the whores of the senses”. Thanks, Keith but they also have greater expectations.

I remember black and white TV but I don’t remember getting a colour TV and I remember having to get up to change a channel and to tune the channel in but I don’t remember getting a remote control. I was used to the old system and wasn’t excited by the advancement in technology despite the giant leap into colour and not having to leave your cosy red armchair to catch the programme starting on the other side. By the seventies, if you had a television it was colour and you had a remote control. Nowadays the television has taken a back seat to the computer but the big screen TV still has life in it, if you live in England you might watch the BBC or ITV or Channel 4. In my case living in Portugal, I don’t watch television, everything is streamed through the computer and sent to the bigger screen. So I slowly catch up to the new-fangled systems but more by necessity than desire. I think the difference these days is that people are waiting for new technology, upgrading all the time whereas you used to be more easily satisfied with what you had – it worked, it did what you needed in the world you lived, but that was to change. In the fifties, fridges, freezers, toasters, new cars, air travel for everyone, consumerism was born, but the products didn’t upgrade so quickly. I’m still on the iPhone 5, an antique by today’s standard, a spectacular futuristic alien impossibility from the perspective of my seventies self.

People like the familiarity of what they grew up with, or they used to. Cheaper supermarkets never really made up for the corner shop, despite saving some money, the cosy experience was worth the extra cost if you could afford it. But then a lot of corner shops were driven out of business so you had no choice. But then you had the massive choice of the supermarket’s floor space, advantages and disadvantages. I wonder if horse riders were horrified at the mechanical monster they might have called the motorwagen – and asked what about your relationship with your ‘horseless carriage’? Caring for your horse made it a better travel partner, a car has no heart. Having said that there are a lot of people out there that have a loving relationship with their car and it’s also true that the love and care they put into their vehicle also makes them a more reliable travel partner.

What am I getting at today? I don’t know, just musing about a changing world, expectation, how quickly things advance and how easily we forget about how it was when we’ve been exposed to supposed advances. Well, my computer doesn’t have a remote control so if I’m watching something through my computer I have to get up to change the channel. So that isn’t actually more convenient. I can binge-watch Doctor Who, watch the whole season all at once. In the seventies, I had to wait till, was it 5 or 6 o’clock, on a Saturday to see the next episode and it was a disaster if I couldn’t watch it, you’d missed it and might not ever have the chance to see it again. Perhaps there were repeats sometime in the future but that could have been a long wait and then you’d see the episode out of sequence or re-watch the whole series with the missing episode but then, that was also weekly even as a repeat series and you could easily miss the same episode you missed the first time. Then there’s the horror story of the BBC erasing early episodes of Doctor Who and other sixties TV programmes, so if you missed it, you would never be able to see it, it’s gone. Those days are most certainly over unless a virus from space arrives and erases all digital information. The In Deep Music Archive would be very popular in the event of such a thing. In the end, the choice between watching the whole series in a row or the thrill of waiting a week depends on your taste, your time and what you expect.

Nowadays the wonders of technology make our lives very comfortable. Access to information, the availability of all kinds of entertainment and the possibilities of communication. What we could never know was that the information would be such a mixture of good and bad, true and false and complicated with personal opinion. We seem to be worse off than when we were exposed to less information and one might argue that with today’s massive flow of information, it’s impossible to sift through it all to find the truth. Has it made us more ignorant? The other problem is that it’s impossible to change anyone’s opinion these days, each side thinks the opposite side are idiots. This brings me to some quotes, these two come from Bertrand Russell (1872-1970), a British polymath.

The fact that an opinion has been widely held is no evidence whatever that it is not utterly absurd.

The whole problem with the world is that fools and fanatics are always so certain of themselves, and wiser people so full of doubts.

Or as an anonymous talking head on the news said the other day, “People get their opinions from sources that reinforce their existing opinions or biases”.

So the irony is that progress can cause as many problems as it solves. Easier, quicker travel possibilities, more pollution, safer, less energy-sapping lights (I hate LEDs) and the mood has gone. Every change we make comes with its own set of problems but progress has managed to create large gaps between the haves and have nots and it’s a dangerous world out there in the so-called luxury of the west. I always wonder about the teenagers in England killing each other with knives when Syrian kids are getting bombed. The point is that we adapt to our situation, and if our Tesla doesn’t work we are frustrated not really noticing that having a road to drive it on is a miracle in itself. Then there’s medicine, somehow a controversial subject these days. We have come a long way from Hungarian physician and scientist Ignaz Semmelweis (1818-1865) who was mocked for suggesting that doctors should wash their hands. What is the greatest advancement in technology? You’d be hard-pressed to come up with something more important than the thing we take most for granted – the lavatory. 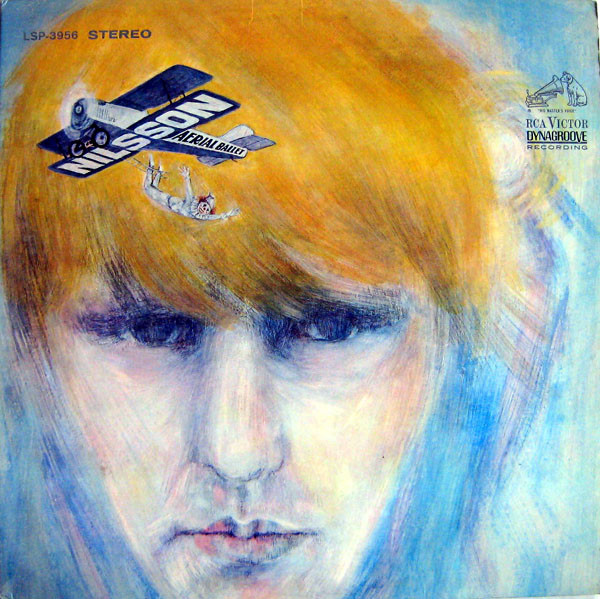 Music today has been Harry Nilsson’s Aerial Ballet (1968). Stylistically, he lives in his own world. Somebody commented the other day after I posted Aldous Harding’s debut album, that she is almost her own genre, well you could say the same about Harry. Fred Neil’s classic song Everybody’s Talkin’ is on this album, featured in the classic film Midnight Cowboy (1969) starring Dustin Hoffman and Angelina Jolie’s father Jon Voight and Warhol Superstar, Viva. For those of you that remember Porpoise Song from The Monkees‘ album Head (1968) that appeared on A Box Of Birds, the opening track on this album, Nilsson’s Daddy’s Song was covered by The Monkees for this movie. The track One was made famous by Three Dog Night (No.5 in the US in 1969) and has been recorded many times by a wide range of artists from Aimee Mann to John Farnham to Dokken and many more.