Today wasn’t exactly a scramble, it was just full of different ingredients from the technical to the creative, the business to the sporty, the musical, the languages, the writing but again no reading and no trips to that wonderful place they call the outside. Still, inside is also where the action is and I jumped out of bed to see the great Australian sportsman and snooker player Neil Robertson, that nobody over there has heard of, knock Ronnie out of The Masters tournament. That led to a business meeting to get an accountant on board for tax issues living in another country and that led to listening to Brian in New Jersey’s songs for a later sesh and also Fred’s songs for a sesh Friday. Liverpool – Arsenal in the Carabao Cup (0-0) and the day is done via emails and music. I imagine everyone has different versions of this day in their daily lives depending on the work you do, full, normal.

Olivia managed to fix my laptop, it wouldn’t connect, it was something to do with the VPN but then my main computer suddenly wouldn’t let the audio work. Add to this, the camera disappears if I restart it and I’m willing to go back to rehearsal rooms with real people, plugging in, banging things and writing lyrics in notebooks whilst strumming an acoustic – wait a minute, that’s what I do anyway. The point is I’m trying to make it easier for everyone to collaborate remotely so I have to learn these things and have a clue how to fix something when it goes wrong – or at least have a tech close by who can help you sort it out. Using your home studio to experiment with riffs and beats, laying down a rhythm track to find a groove and chord progressions, or using the multi-track facility to record a song you have written on your acoustic, giving it a structure and having the ability to overdub guitar ideas, harmonies or in my case violin c/o Olivia. Or have a collaborator send me a song and have me play guitar or bass or sing on their track. Or can you put a tuba part on my track?

In the modern world of music, a world quite different to how we did it, learning guitar in the seventies, sitting in our bedrooms under posters of our favourite bands, bleeding fingers, joining a band and finding our way into plush recording studios with expensive equipment and rental charges, expensive producers and mega budgets that covered all these costs, these days you have to be U2 to afford that, already rich. Plus of course, record sales are low and ingenious homebodies have figured out how to use their home equipment to great success, think Billie Eilish and Finneas, although the list is long. 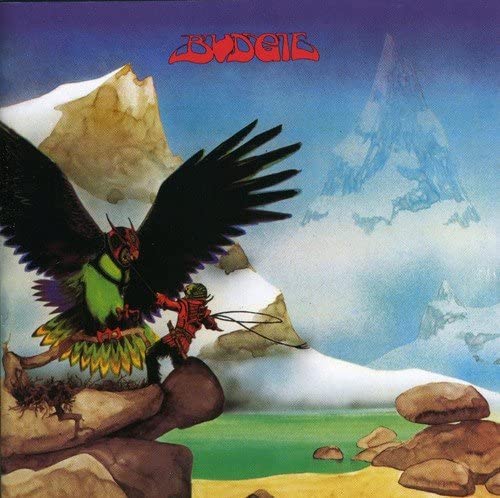 On this point, as we flirted with heavy rock and glam, krautrock, pop, prog, punk and reggae, folk and the legacy of sixties music in those glory days of our teenage years, like everyone, it seems we are infinitely connected to the tunes we heard that drove our parents wild. I sadly learnt today that Burke Shelley, singer and bassist from Welsh power trio Budgie, has died aged 71. I try not to always write about the death of a musician whose records I own, if I did then this would simply be an obituary blog because at this point many of those that I followed as a teenager are into their seventies and eighties and off to The Great Gig In The Sky. I saw Budgie live at St George’s Hall in Liverpool in the mid-seventies. I was in the front row and remember “freaking out”, that meant shaking your head around to the music in those days. I got a broken drum stick from the stage, took it home as a trophy, glued it back together and proudly owned it until all my treasures were thrown away when I was out of the country, discovering the world. The support band was an unknown Judas Priest and everyone wondered who the singer with the short hair was. There will always be a place in my heart for Budgie and his crazy high voice and his clunky pick-played bass guitar, drummer Ray Phillips and guitarist Tony Bourge, the original band. The Roger Dean cover of Never Turn Your Back On A Friend (1973) and mad titles like You Are The Biggest Thing Since Powdered Milk and In The Grip Of A Tyre Fitter’s Hand, Welsh humour perhaps, but their most famous song Breadfan was covered by Metallica and later another Budgie song with a silly title, Crash Course In Brain Surgery. Breadfan was one of the first riffs I learnt to play. Burke Shelley, singer-bassist, RIP.