A busy, busy day today so I wouldn’t have been able to go out even if I wanted to. Starting with calling my ex-All About Eve and Seeing Stars bandmate Andy C in Folkestone. Short chat, he had mate Paul coming into play bass on one of his tracks. Next was the lawyer and partners to help get my collection into Portugal. One of the points he will make with the customs is that Covid has stopped us getting this together in the first year of residency here, I don’t think anybody in officialdom could ignore that issue. After that three seshes in a row with Fred in Minneapolis, Mike in Chicago and Noel in Surrey. Whilst all this day action was going on I was starting with a Logic Pro tutorial online. I have a tutorial somewhere c/- sessioneer Brian in New Jersey but this is the problem with me, I can’t find it. Playing the guitar, singing, writing songs and words, it’s all so much easier than the technical stuff including finding the instructions to record the ideas!

Another eye thang today in between it all and Olivia is telling me that my right eye is bloodshot. Hmm, are there any neurologists out there who are freaking out when they read this? I’ve had this my whole life and it is actually better now, at least it doesn’t turn into the headache from hell and a week of body trauma. Also, I have been rubbing my eye today so that might be why it’s bloodshot, so don’t tell me I’m going to die. By the way, the doctor didn’t call today so I’m left in limbo about whether I can go out. As far as healthy indoor pursuit, looking at a computer screen all day can’t be a good thing, not going out can’t be a good thing either. And as one fixates on the microcosm of their world, mine is dominated by the incredible news that the dishwasher is leaking! Wow! Incredibly, so is the sink, double wow! We know danger – but we fight on.

Sidney Poitier died today, a groundbreaking Oscar-winning actor and one could wax poetic about him all night but for me, it was the film To Sir, with Love (1967) where I found out about him, but I also loved the title song sung by Lulu. Written by Don Black and Mark London, it reached No. 1 in the USA but oddly wasn’t a single in the UK, a B-side of Let’s Pretend which reached No. 11. Seems like an opportunity missed especially as the film was so well received and Lulu had already been in the charts, her debut single Shout (written and originally recorded by The Isley Brothers) reached No. 7. Her albums though failed to chart for three decades with a resurgence in popularity in the nineties. Known as the Scot with the raspy voice her albums are certainly patchy but there are moments of sixties girl singer splendour in there. On her second album Love Loves to Love Lulu she bangs through some songwriters and popular songs of the day such as Morning Dew (Bonnie Dobson) and the obligatory Beatles song doing a rousing orchestrated version of Day Tripper and the Bee Gees’ To Love Somebody. Also on the album, The Boat That I Row written by Neil Diamond, No. 6 in the UK and a Canadian No. 1 in 1967 and Gladys Knight & the Pips’ Take Me In Your Arms And Love Me written by Motown writers Barrett Strong, Cornelius Grant and Rodger Penzabene and originally produced by Norman Whitfield. 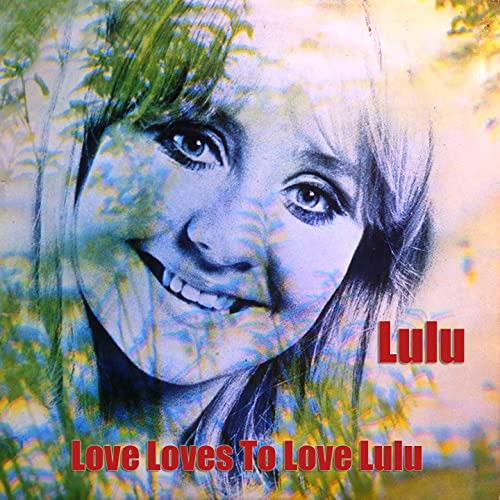 Lulu won the Eurovision Song Contest in 1969 with Boom Bang-a-Bang (a UK No. 2) and sang the badly-received theme tune to the Bond film The Man With The Golden Gun (1974). In the same year, she recorded Bowie’s The Man Who Sold The World (a UK No. 3) with Bowie and the Spiders’ help, Watch That Man was on the B-side. The Man Who Sold The World is a great version of a great song with Bowie playing the sax, I bought this single when it came out.

Lulu’s film career is ‘light’ to say the least, intriguing, starting with Gonks Go Beat (1965) and you simply must watch the trailer.

“Gonks Go Beat, by Robert Hartford-Davis – set in the distant future. An alien from the planet Gonk comes to Earth to establish peace between the two remaining nations, one of which prefers rock and roll and the other ballads and his task involves listening to the Teens, Lulu and The Graham Bond Organisation.”

See if you can spot Ginger Baker and Graham Bond and somewhere in there Jack Bruce. Lulu and The Luvvers, The Nashville Teens and a whole lot of unknown sixties groovers. Her second film was the aforementioned To Sir, with Love but her third was Cucumber Castle (after the album of the same name, 1970), starring Barry and Maurice sans Robin from the Bee Gees. Spike Milligan stars as does Frankie Howerd, and Vincent Price. Roger Daltrey, Donovan, Mick Jagger and Marianne Faithfull have cameos. Blind Faith also appear, that’s Ginger, Eric, Ric Grech and Steve Winwood. The Cherry Picker followed in 1974, also with Spike Milligan – the original print is missing! Her film career continued sporadically into the eighties.