Tonight at midnight with no one around, a week into our condition, we quickly snuck out masked and armed with surface disinfectant, because we simply had to dispose of the garbage and the recycling. Olivia told me the garbage was starting to smell, which means she’s on the mend. The garbage bin and recycling is directly outside our front door, so it didn’t feel like we were being irresponsible, January 2nd, empty street and we had to do this. Outside a low mysterious mist had descended on the street as if the world had changed since the last time we were outside. I expected to hear the scuttling of mutant beasts, shadows of giant horned ex humans, roaming, lurking, hunting. We managed to escape back into our fortified building, through the barbed wire, beyond the gun turrets back home with only the shrieking scream of the monsters behind us.

Despite the danger of the marauding fiends outside taking humans to their lairs, it was a welcome relief to breathe outside air whilst standing in the street instead of between four prison walls. The day had begun early for me with a sesh with Arktik Lake Tony from Sydney at 10 AM, three hours after I went to bed. I wonder will I evolve into one of the creatures from The Time Machine after a millennium in the darkness. After Tony, I went back to bed for three more hours because it was Chelsea – Liverpool at 4 PM and a later sesh with Brian in Indiana at 10 PM, so I had to be alert for both. The game was amazing, 2-2, so Man City won.

I did Spanish today as I try and figure out how to learn multiple languages, read, write, sesh and learn my home studio all at once. Working on the theory that you only die once, I think I should make the most of the living things and what feels better than learning? At this point, before writing I decided I wanted to watch the documentary about the mammoth bones found near Swindon and presented by David Attenborough. I love seeing those nerdy archaeologists and palaeontologists digging around in the dirt looking for artefacts, fossils and signs of ancient human life – it’s rather like looking for records.

During seshes today I actually put my old seventies Strat through the Ibanez effects unit and remembered that sound, even though it was without an amp it still had atmosphere. This was the guitar I brought with me from Liverpool, via London to Sydney and used at all those early shows pre-electric 12 string and on the very first album. As I didn’t have my Rickenbacker 12 string yet I used a Burns 12 string on the two 12 string songs, Is This Where You Live and For A Moment We’re Strangers. It was revealing to see how worn this guitar is in comparison with when it was bought new at Frank Hessy’s in Liverpool in the seventies. There’s nothing like an old guitar, I was talking about it with Arktik Lake Tony (he builds guitars). So what is it about old guitars? Are all old guitars good? Are all new ones bad? Or are they just different? My next dream purchase when the million quid lottery win happens is a sixties Gibson Dove acoustic. It’s the kind of guitar that sets you off for writing a song by itself by having you just play one chord, for some reason new guitars don’t do that, you have to tell them what to do. 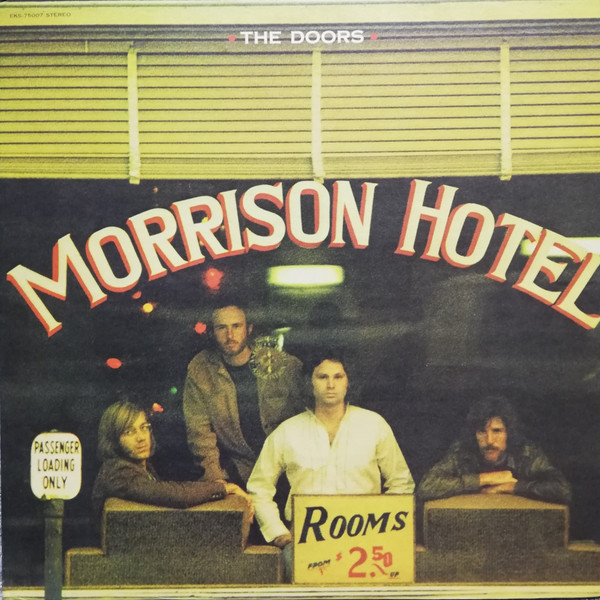 Music today was The Doors’ fifth album, Morrison Hotel (1970), recorded in 1969, although it opens with what I thought wasn’t one of my favourite Doors songs, Roadhouse Blues, I liked it tonight. The second track Waiting For The Sun is oddly placed, written at the time of the album of the same name (their third) but not used. Back to freaky beat band basic with You Make Me Real followed by Peace Frog, “Indians scattered on dawn’s highway bleeding. Ghosts crowd the young child’s fragile, egg-shell mind”.

Unique with Morrison‘s charismatic persona, voice and poetic lyrics, the distinctive organ of Ray Manzarek, John Densmore’s tuned-in drumming and Robby Krieger’s searching, creative guitar. The odd idea that the bass was either played on the organ or a guest seemed unusual but also helped set them apart. The lovely Blue Sunday is followed by Ship Of Fools where he sings, “The human race is dying out” and it seems that the album is almost alternately sequenced for driving uptempo rock songs and moody tangents. The macabre, fairground sound of Manzarek’s keys in Land Ho! gives the band such a distinctive sound and it seems that this album always has somebody in the band doing something interesting, although not always at the same time and whilst always achieving that rock band accessibility.

Purely coincidentally, the next song, The Spy, was originally called A Spy In The House Of Love after the book by Anaïs Nin, released in 1954, I happen to be reading her Under A Glass Bell (1944) at the moment. Queen Of The Highway (“He was a monster dressed in black leather, she was a princess Queen Of The Highway” – There’s always something dark going on with Morrison and even if a song has a formulated structure that darkness breaks on through. Indian Summer sounds creepy even when he says, “I love you the best, better than all the rest”. The last track, Maggie McGill, has you worried for her from the moment Morrison opens his mouth. Disturbing hidden in the naive normal of the sixties.