New Year’s Eve arrived with a sneezing fit that drove me out of bed, blocked, exploding, noisy and not quite ready to face the day. So, it seems that the next stage of Omicron is congestion, a runny nose, sneezing, slightly sore throat and a cough but ‘they’ say no lung attacks – it’s more infectious but less dangerous. I went into the front room, drew the curtains, opened the shutters, opened the window and was greeted with a lovely warm breeze, a blue sky and only small white clouds dotted above as if it were May. I hear it’s been mild in England too but this new climate takes some getting used to, Southern Europe, you can see why people retire to Spain and Portugal and we’re not even in the south. The closer you get to the equator the warmer it gets and if you are wondering where the equator crosses the planet, it’s still a hike from Porto – 2,843.19 mi (4,575.67 km). “The Equator passes through 13 countries: Ecuador, Colombia, Brazil, São Tomé & Príncipe, Gabon, Republic of the Congo, the Democratic Republic of the Congo, Uganda, Kenya, Somalia, Maldives, Indonesia and Kiribati.” I hope this information will be useful to you in 2022.

I had a sesh with Fred today in Minneapolis (where it’s snowing) and afterwards decided to make some more advances on my home studio and got my keyboard plugged in, and set up my old effects rack, opened my pedalboard and spread some extra pedals around, not exactly Bob Clearmountain but for me that’s progress. I’m trying to make 2022 more personally productive – meaning, generally engaging more with songwriting. This will mean I can build up my own body of work in order to make another solo record at some point in the future as well as being able to engage more easily with writing partners, exchanging ideas. If a sessioneer sends me a track, I can sing or play guitar on it. Or, I can start something here and send it to a sessioneer to work on. I can send a chord sequence, a riff, a feel with a bass line. How exciting, creating something out of nothing and sending it to somebody else for their input.

I got my Ibanez UE405 effects rack set up. That’s what I used on a lot of the earlyish ex-band records but not the first. (It’s the device I used for the delay effect on Reptile.) I’m not sure exactly when I first got it but it must have been sometime in the early eighties. Before that, I had a Boss stereo chorus and tremolo pedal, that I loved (it went walkies years ago and I wish I still had it). I can’t actually remember what I was doing for delay on the first album and I only recall the delay on this unit so I must have had it quite early on perhaps from The Blurred Crusade onwards. There would have been other pedals pre this unit, some Boss distortions no doubt, the OD1. But when I think about guitar sounds on the first album, a track like Memories In Future Tense, it’s delay-free and I’m wondering if I just used chorus before I bought the Ibanez unit.

On nerdy guitar information. I was reading today that the solo on Steely Dan’s Reelin’ In The Years from Can’t Buy A Thrill (1972) is Jimmy Page’s fave guitar solo! It was played by session man Elliott Randall on a 1963 Strat fitted with a PAF (patent applied for) Humbucker, neck pick up and into an Ampeg SVT bass amp. This is the kind of information that is gold to some of us and means nothing to others, possibly the same as knowing how Nadal strings his racket…although.

We hung out of the window at midnight and there were lots of fireworks going off around the town and we lit sparklers that didn’t last very long. We pondered hope like we all are at the moment. We followed lanterns that floated into the sky, stood there until the fireworks stopped and we moved back inside where it was now 2022. It sounds so sci-fi. Happy New Year. 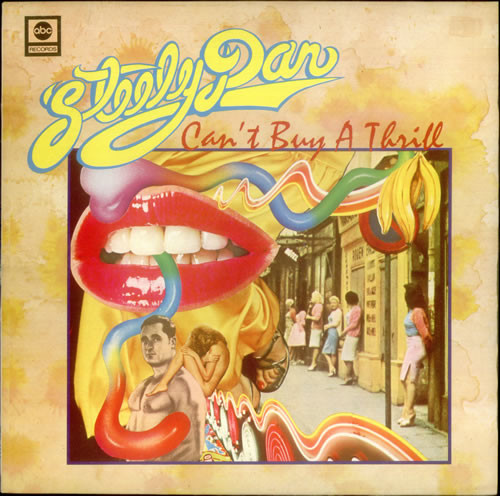 Music today was Steely Dan’s Can’t Buy A Thrill (1972). This was their first album and Donald Fagen wasn’t convinced that he should be the only singer so David Palmer shares lead vocals and sang one of their most famous songs, Dirty Work. Do It Again, the first single from the album, reached No. 6 in the US, Reelin’ In The Years reached No. 11 but surprisingly Dirty Work doesn’t seem to have been released as a single? Steely Dan are loved or ignored – like The Stooges. That’s what makes the world go ‘round.