Rushing out of the house today, I didn’t have time to take the recycling but not just because of time – I suspected that the recycling bins would be very full but I was in such a rush I didn’t even remember to check even though they are just across the road from our apartment building’s front door. The other reason was because I have new shoes and I was creaking around, my feet locked in bear traps. I was walking like my feet were encased in concrete, blocks on my feet and although these were the same shoes as the ones I usually wear, my old pair were so worn out that they barely qualified as shoes anymore. I headed towards the Marquês square, crossed out of the left-hand side to avoid the Covid testing centre and walked behind the bus parked at the bus stop and around the corner in the direction of the pool – then I stopped. I don’t think I’d been out of the house five minutes before I realised that the new shoes were just too painful and were already tearing the skin off my heels. I put my bag down on the pavement and took my shows off and put my trainers on, what a relief. I’ll give anybody 10,000 bucks an hour if they wear my shoes in for me, haha. This must have been someone’s job for royalty or millionaires that had servants. I wonder.

On the subject of trainers/sneakers (they used to be called pumps/plimsoles) and the way that sports clothes have taken over the world, I saw a nun in trainers today and I wondered when nuns started wearing trainers with orange flashes down the sides? The battle for women to wear flat shoes at work has become an issue, men get to wear their comfy loafers but in certain offices and companies, women have to wear high heels, it’s another thing that will change as many things are.

I hit the pool, the first time since last Wednesday and since the Christmas closing. I jumped into the water (always a thrill), adjusted my swimming cap and goggles and launched myself down my lane. It didn’t take me long to stop, I had a pain in the top of my shoulder and I barely made it to the other end. I struggled back and swung my arm around a few times by the poolside and managed to find a spot to massage, press down upon and manipulate and I was fine, completing the usual mile plus without issue. But it made me think, what state would I be in if I didn’t swim? Sure, you get injuries when you work out but when you don’t…

I left the pool and there was an ominous light, luminous clouds separating the people from the blue sky that we know is there. The Christmas decorations looked strange, disappearing down the street, their days numbered, their signalling of the joy to come now already in the past (363 days to go). I went to the psychedelic psupermarket and in the queue to pay an old lady (an older lady) hunched over was checking her change. Everything she did was in slow motion. I contemplated the speed of youth, the speed of small children, the speed that teenagers talk, the speed that they move. I thought about the footballers, their careers over at 32ish, the occasional one holds on, Milner, Ronaldo, Zlatan. Your body already begins to lose its whizz and when you’re an athlete it must be so frustrating, so fit and yet not fit enough. 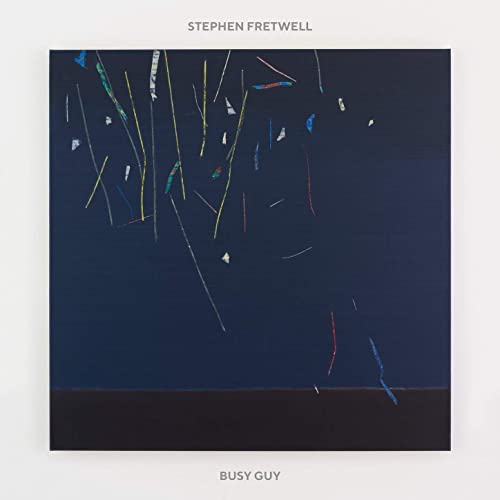 Music today has been Stephen Fretwell’s Busy Guy (2021). He is a classic singer-songwriter in the truest sense (think Tom McRae). The odd thing about him is that this is his first album for 13 years. He released 8 songs, a mini-album in 2002, his debut solo album Magpie in 2004 (No. 27 in the UK) and then Man On The Roof in 2007 (No. 44 in the UK). I haven’t been able to research where he went except he must truly be a busy guy.