Straight out of bed on Christmas Day and straight in front of the tele to watch Emily Blunt in Mary Poppins Returns (2018), the perfect Christmas Day entertainment. Last Christmas Day here it was sunny, today it was rainy so it was indoors and by the time the film had finished, it was already getting dark. After that, a lazy day of listening to complicated music on my Spotify Seventies Progressive Playlist. But when I say listening, I mean listening, not doing anything else, turn it up, sit in front of the speakers, close your eyes and listen for three hours, that’s the way to do it. You can listen to my playlists on Spotify by connecting to me (@indeepmusicarchive), there’s quite a few and they are still a work in progress as far as multiple genres. Last night I listened to two hours of Japanese ambient music on 6 Music and made a playlist of it. I’m liking using this channel to discover new things and if you go to my playlists, you just hear the music, not the DJs. Having said that I like the DJs – when I like the DJ, I like some information about what I’m hearing, knowledge can make it better despite art affecting you on a level beyond information.

Olivia cooked a magnificent Christmas Day meal today with illegal Brussels sprouts, stolen peas, hijacked potatoes and a weird veggie roast that I’d bought weeks ago at the posh department store, El Corte Inglés. Somehow it happened to land on my plate on Christmas Day when it would be its most perfect. We watched the remaining available episodes of Doctor Who, it’s complex too, it’s the progressive rock of TV series – imaginative, unlikely, explorative, fantastical, skilful, humorous, meandering, tricky plot, not everyone likes it.

The third test started today and I’ve had it on in the background, three wickets on the first morning, Australia are destroying England. So I decided I’d continue with this idea of listening to what a DJ plays and make it a playlist on my Spotify just so I can listen to some music I didn’t pick whether it be new or old and then refer back to it for the surprises. Tonight it was the actor Cillian Murphy’s choices which you’ll see under his name on my multiple playlists. I wonder how many people use Spotify and how many use Apple Music because I find Spotify easier to navigate.

Arktik Lake Tony sent me a pic from the new Rickenbacker book which has a nice pic of me playing my stolen guitar. The kids got him the book for Christmas and I appreciate being included. I sometimes think that I should make albums exclusive to guitar brands because depending on what type of guitar you play, the tunes come out differently. Imagine if Slash or Ritchie Blackmore or Jimi Hendrix had played a Rickenbacker. Imagine if Rory Gallagher or Roy Buchanan had played a Les Paul. This unthinkable list would change so much about these artists and their sound, even if it is still them playing the guitar and despite all their own personal style.

Presents today included an electronic metronome from Olivia, my mentioning it the other day was purely coincidental. I got a great present from Olivia’s dad – two 100 watts large lava lamp light bulbs. Apparently, he has more too, which he will bring when he comes to visit us next year. A reminder to the world, if you ever find any anywhere, store them, send them, keep them, but don’t ignore them because in 2029 there will be none and then there will be no lava lamps and that will be tragic. 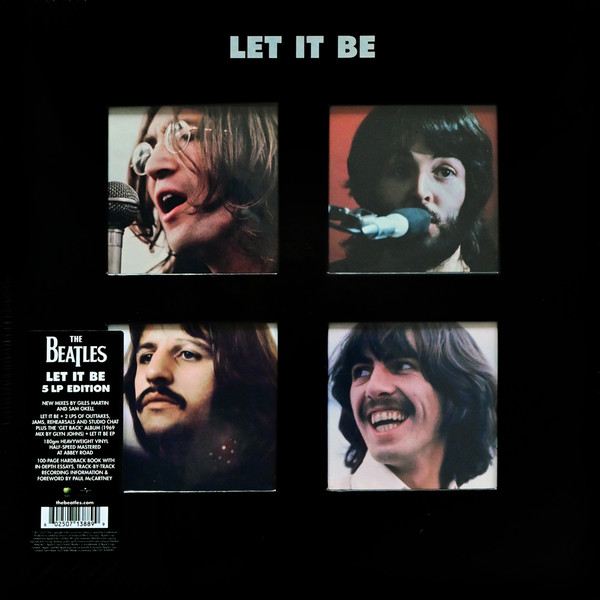 Music today (despite listening to some fascinating playlists) has been my Christmas present (also from Olivia), you guessed it – the vinyl box version of The Beatles‘ Let It Be. The next question is have we started watching Get Back yet and the answer is sadly no even though I’m chomping at the bit. I feel like we need a good steady run at it because once started I won’t want to stop. Sessioneer Fred told me he was on his third run through it, haha!