I began the day with an Oz sesh with Michael in Canberra that didn’t start till later. I usually have to get up earlier so with this one starting at 12.30 PM it was within my waking hours. It gives me a chance to eat breakfast with my eyes open, a papaya a day keeps the doctor away. In Europe, papayas are grown in South East Spain (Almería, Málaga, Granada and Murcia) and the Canary Islands so they find their way to Portugal quite easily. What I’m trying to figure out is how they still seem to be arriving in the shops in mid-December. After the sesh I went to the bakery and felt the coldest day so far on my legs, the icy winds from the north were reaching the northern part of Portugal today. The sky was blue but the teeth were sharp, biting. I came back home to listen to Thomas Tallis (1505-1585), Spem in Alium (The Forty Part Motet), which Michael was talking about today, a handy way to get some blood flowing.

Outside our building’s front door there was a recovery truck parked across the cars that park at right angles to the kerb across the road. There’s a cafe, two hair product shops, and the building seems to have both residential and perhaps medical offices. In the line of cars parked there, there was a white BMW with Spanish plates and three people standing around it. I suppose one was from the recovery truck. I noticed that the driver’s door window was smashed and I wondered what the story was. Had it been broken into, vandalised, was it faulty, did they slam the door too hard? I’ll never know, but it looked dramatic.

Monday I walked out of the building to the pool and one of the regular ladies of the day was leaning against the empty shop sill in the rain. We waved as I got under my umbrella and wondered how she could sit out there in the rain like that and asked myself is she there because business is so good and can’t turn it down or is she there because business is so bad and she needs the work? I should be going to the pool today but it’s a holiday in Portugal (as was last Wednesday), last week it was Portugal Restoration Of Independence Day and this Wednesday, Feast Of The Immaculate Conception. Feel free to click on the links.

The holidays have slowed everything down in regards to the paperwork for moving the archive. This, the pandemic and an uncertainty about exactly what we need to officially move has been a challenge. Offices not returning calls, agencies helping us that don’t quite understand what we need, the language problem and all the time the deadline is looming. At this rate, the archive will be opening on The Wirral or somewhere on the outskirts of Liverpool if we can’t get it here in time. Maybe Scotland because if they leave the union and apply to get back in the EU and succeed, then the whole Brexit issue no longer becomes an issue.

We had a Skype meet with Jerome Froese today about our album, the artwork, the release and wondering if his audience and mine cross over in any way as we collaborate and contribute what each of us does to the project. What happens when two different styles come together? I remember being in Fiji and looking at the menu and deciding on the avocado drink with chocolate streaks, I’m not sure who’s who? 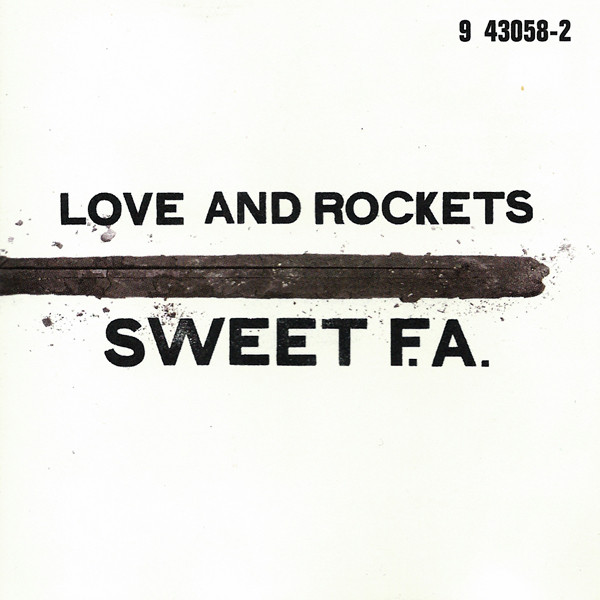 Music today has been the sixth Love and Rockets album Sweet F.A. (1996). A mellow start with the title track, as far away from the last album as could be. I keep on hearing an English seventies and American nineties hybrid in their music when they get mellow like this, Judgement Day is like Barclay James Harvest meets the Dandy Warhols. Use Me sounds like The Jesus and Mary Chain meets The Stones, they are so astride the seventies and the nineties, missing the eighties out completely – which is obviously their genius. Fever is back to the drum machines but with a Fender Rhodes like The Beta Band meets Jona Lewie. The single Sweet Lover Of Mine sounds like The Breeders formed a band with The Charlatans.

I could go on like this, Pearl is beautiful, with an arpeggio from an early Genesis album and a sweet David Cassidy vocal. Shelf Life is like a later Bowie song. Sad and Beautiful World is great, the old Squeeze trick of low and high vocalists together, but intriguing and moody rather than ‘Sarf Landan Pop’ and showing the depth of the album. I read that Natacha was for Natacha Atlas, getting floydy again before going slow glam. Words Of A Fool is finding its way back to the groove with its Massive Attack bassline but with fuzzy guitars. Clean, horror fog horns and spacey vibe reminds me of Wire if they were from the moon, music for lounging around in craters, sprinkled with moon dust. Here Comes The Comedown, a song from a London musical, I see the dancers in the chorus line dressed in rags like a modern-day Oliver Twist. I see Oliver Reed, I see Fagin. On the final track before the Sweet F.A. reprise, I hear some Nine Inch Nails gatecrashing Depeche Mode’s party.

What is it with all these comparisons? I don’t know, I just like the album a lot.