The candles and blankets theory seems to be working, as long as you are wearing industrial clothing, a lead-lined helmet and thick fake fur boots. This is December in Porto, houses with no heating and certainly no double or triple glazing. We could get the bar heater going or the electric radiators plugged in but the heating costs are high and to tell you the truth having a blanket and a whole lot of candles moodying up the flat is rather nice. The Christmas tree is up and Olivia finally found red baubles to add to the golden ones, although I’m still waiting for the chocolate Santas. Olivia and I come from different Christmas traditions, Olivia being German opens presents from under the tree on Christmas Eve evening and everybody has to see what you got, enjoying each other’s present opening. This version could also be influenced by the fact that Olivia’s mum is Swedish and I remember that when I lived in Sweden this is how we did it. For me being English, as a kid, it was a pillowcase at the end of the bed before bedtime on Christmas Eve and waking up in the morning with it (hopefully) bulging.

In Portugal, they open their presents at midnight on Christmas Eve. So, what do we do?

Obviously, the days of pillowcases stopped whilst still a child, so this year I’ll be opening prezzies (should I get any) when I wake up on Chrissie Day (which will be in the afternoon) whilst Olivia will be opening hers (should she get any) the night before. We just can’t shake off our traditions, but this way we enjoy each other’s celebration, in Portugal – where they do it differently.

Olivia begins her birthday celebrations today, three days, Friday out with her Spanish girlfriends, the Bilbao girls (although one was born in Bolivia). They go for Ramen and speak Portuguese together. They came back here afterwards, Olivia wearing a birthday sash and a birthday tiara with a musical box as a present, coincidently from the same shop where I bought my granddaughter’s birthday present. Tomorrow I get to hang with Olivia, sushi for dinner and Sunday the other girls come here on her actual birthday whilst I’m in sesh land. Today was seshes and sashes.

Two seshes for me today, Fred in Minneapolis and Mike in Chicago as well as quarter-final snooker sessions (my man Ronnie lost). I listened to Fred and Mike’s songs, illustrated some guitar and songwriter points for Mike and lovingly stared at my cassettes and imagined getting back to the old world way of writing as described earlier in the week – singing onto cassette. The Beatles had to remember their songs, can you imagine? Can you also imagine the songs they forgot? They can’t have remembered everything just because they were good. Good things and bad things can be equally easy to forget. 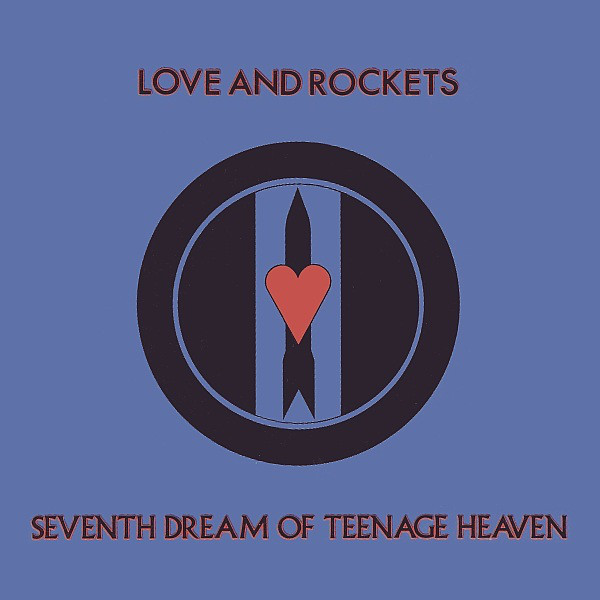 Music today has been Love and Rockets‘ Seventh Dream Of Teenage Heaven (1985). Oddly left of centre and immediately accessible. Nursery rhyme melodies and angular guitars and acoustics, fuzz and fluffy hair, sing-along verses and choruses as if the local boat club had started their own group with the boy scouts chanting irreverent singalongs. A surprising cover of The Temptations‘ Ball Of Confusion written by Norman Whitfield and Barrett Strong somehow translated perfectly to their sound. The whole thing is an unexpected step away from Bauhaus (via Tones On Tail) to a world where not everyone who was a fan of the original band may have wanted to follow, a brave new world from three-quarters of cult gothic monsters carving out a sweet shop in an abattoir. Brilliant really.