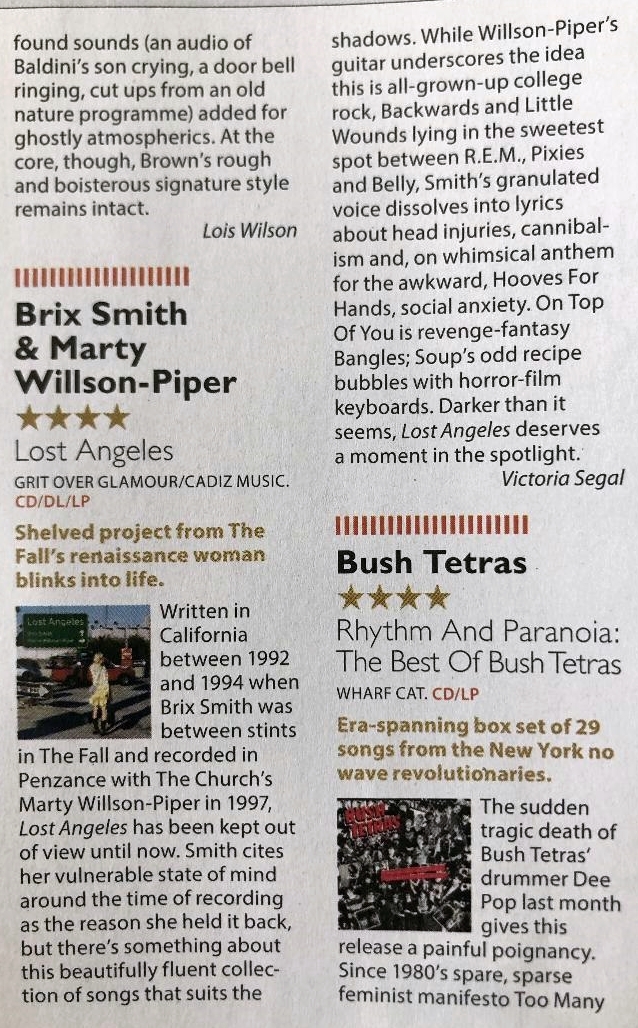 The day started with Brix Smith sending me a glowing four-star review from Mojo Magazine for our forthcoming album Lost Angeles (2021). The album will be released on vinyl and CD on Cadiz Records out of England on December 17th (pre-order here). Brix and I wrote the songs together in Los Angeles but the album itself was recorded in Penzance with Brix singing and playing guitars and bass, Matt Exelby on bass too, Tim Powles on drums, and me on guitars and singing. I think some of the drums were recorded in Sydney, too? The album was recorded a few years ago and never released, mostly because the label One Little Indian’s A&R man left as we were about to be signed and that kind of put a damper on things. We ended up recording the album anyway with Dare (who also sang some of the BVs) but then it lay there like an Anglo-Saxon hoard…until now.

I spent most of the day wiring up speakers and setting them up, finding the space, changing things around and what usually happens when you do things like this is you discover that everything you are moving around needs cleaning, dusting, wiping and as soon as you’ve moved something, you see where the dust is somewhere else, so I ended up cleaning the desk where the computer/studio sits and rearranging and trying this and that till I got it set up the way I wanted. There’s also that speaker wire over the door frame issue to deal with, making the wires stay there without unsightly tape or hammering nails into the wall. I finally got it sorted and now I can have music on the stereo piped to the computer desk, should I want it. But, you just can’t compete with the lovely, warm, floor-standing B&W speakers. Music sounds fantastic on them whether it be from the Linn Sondek, the Cambridge Audio CD player or the Yamaha tuner, I haven’t tried the Yammie cassette deck yet as I’m all out of cassettes (there’s about 3,000 in the archive boxes). My point through all this is what a wonderful thing it is to be able to listen to music with a proper system instead of a system of convenience. It takes hearing something that’s not as good to make you realise. Still, I have a clean desk now.

I briefly went out to the bakery around 6 PM into what wasn’t quite a balmy early evening but it was a pleasant night, just dark, nice vibe, Saturday cafes and shops in the Marquês square still open for another hour, leaving the Pereira cafe (“pear tree”) to accommodate the coffee drinkers till midnight. I was coming back home for the shower I didn’t get yesterday due to the strike, psychedelic psupermarket, seshes and French. Then Wales vs Belarus but the listing on Sky was incorrect and I missed the first half an hour, still, 5-1 win, pretty good.

I woke up with a headache, a little sickly in the stomach, so I didn’t really want to do much tonight, so we ended up watching ABBA documentaries on the BBC. I suppose it’s because they have a new album after 140 years. Olivia cooked a nice dinner that fixed me for a while but I’ve been out of sorts all day. I think that my problem is that I expect to feel physically great all the time but I guess as you get older that’s just not going to happen even if you are reasonably healthy – nature takes its course.

Music today was The Head on the Door (1985) and Kiss Me, Kiss Me, Kiss Me (1987), continuing The Cure exploration but I find the more stark the albums, the more I like them. I missed out The Top (1984) for now because I felt like these two went together better. These albums seem to manage hits on each, Smith’s skill amidst mood and obscurity.