The thrill of staying in! Especially when you’ve been out far too much, eating out every night, and having the choice of haemorrhaging cash or frequenting Deaderspoons. A few more plugs to change, football Saturday, Olivia hanging pictures on the wall, taking them off, swapping them around. Gold albums from a different past that usually always hang in the studio but being in between studios are now here in our flat. They qualified as delicate items to transport so we brought them over with Ariel along with other fragile items. Catching up on sessioneer music and preparing for a Sunday of four seshes. Emails and Facebook messages (I’ll get there, I will). We’re back to closing the shutters when it gets dark and although it’s Portugal and the sun is still warm in the daytime, there is a chill in the air at night. So I’m looking at the previously empty shelves that are now populated with artefacts, the wall space has familiar items, there are different mugs in the cupboard and that lovely Indian handmade bedspread looks great on the first bed it’s ever seen. One wonders when everything else that’s in storage in England can make it over here, unpacked and available to enjoy.

Thanks to everyone who has helped out with stage one of the archive move, it’s really helped, especially with £1111 ferry tickets, £2000 for moving everything out of Penzance to the storage for assessment to be sent to Portugal and of course all those hidden costs like 500 euro customs charges for three hours in Spain. The fuel went up since we left because of the ‘fear’ but the campsite saved so much, grateful for that. But, bad news on Aunty Gwen and the selling of her bungalow which will give me the money for the move. The sale fell through so we’re back to square one. The problem is that all the time the archive and studio are in storage it’s dead money paying for something that is just sitting there. Fingers crossed for more interest and Aunty Gwen’s legacy, that is me inheriting her records, her stereogram and her love of music and investing back into the archive and the studio in Portugal. I’ve mentioned this before (I think), Aunty Gwen saw Buddy Holly live – and wasn’t that impressed, she said he sang out of tune! Haha, an eyewitness.

Olivia is fighting a cold and I’m fighting a cough. I think one of the things about getting older is that the pain takes longer to dissipate, or stays. When you are younger you can just shake things off and carry on. As long as my hands remain in good condition I’ll be able to put up with the rest. Phil Collins can no longer play the drums, George Kooymans and Peter Frampton have degenerative diseases that will stop them playing the guitar and Neil Diamond has Alzheimer’s. Then there was Beethoven! Olivia is slowly recovering but I feel like two bottles of cough medicine and some weeks of coughing later, that I should be seeing the light. Talking of light, we brought the two heavy large-size lava lamps, one seems to have a dead bulb the other is taking forever to do its thing and it’s gone from alien nest latticework sci-fi scene to collapsed chunks of wax, but no gurgling psychedelic blobs in freaky red (yet) which is what any lava lamp owner wants whilst listening to music.

I’ve had fun today spelling Alzheimer’s and haemorrhage. I always wondered how to look up the spelling of a word in the dictionary when you don’t know how to spell it. I always struggled with fluorescent and wanted to spell it with ph which took me off in the wrong direction perplexed. I always thought I struggled with anxiety and consciousness, not the acts of but the spelling of, although I seem to have got them right the first time (you have to trust me on that). The typos in the Independent continue every day, missing the ‘in’ of ‘in denial’ from a Greta Thunberg comment and as if losing 7-0 to Chelsea wasn’t bad enough, misspelling Norwich (Noriwch) just adds insult to injury. 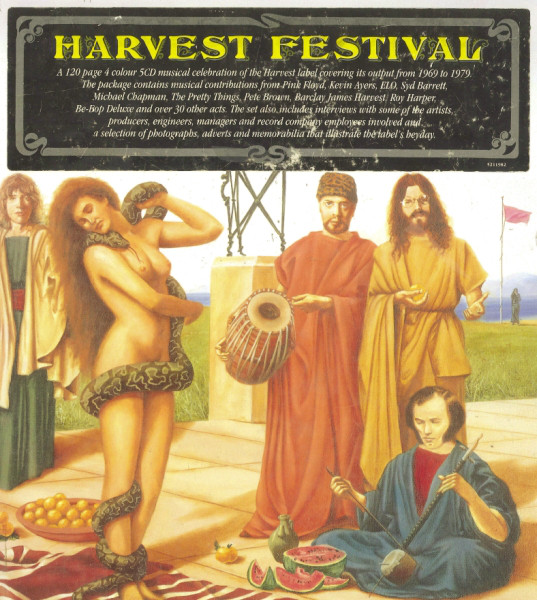 Music today has been listening to the five CDs from the Harvest Festival box set (1999) that I mentioned the other day and brought with us to Porto with some other fragile box sets. It’s really a beautiful thing to look at as well as to listen to. Thanks to Phil Aston for the unboxing.