The draw and release of the sea are the strangest of sensations. Out in the frightening middle of the Bay Of Biscay at the mercy of a giant swell and inclement weather thousands of fathoms above Davey Jones’ locker, an impudent consciousness grabs the ships and the passengers between finger and thumb and takes body and insides, willing or not, from both standing or sitting positions and sways to the left and then the right, upsetting gravity with a sickly weightlessness. The only relief is to lie down and try to sleep which is exactly what I have been doing on this unnerving journey from Portsmouth to Santander. We arrived at 2.30 AM for a ship that sailed at 9 AM and waited. I wrote, tried to sleep and eventually saw the booths open at ten minutes to six. It took so long to board and it was at least 8:30 AM before we were on the ship and finding our way through the labyrinthine corridors to our cabin. From there it was straight to bed before the ship had even sailed, catching up with a sleepless night.

In sleep, the uncomfortable thrust through a choppy sea isn’t so noticeable, perhaps it would be if it were worse but today despite the arrival of late October, it’s calm enough to be ignored. That is until the announcement comes that the dinner lounge is open. It’s 6 PM and time to try and stand up, unlock the heavy door and move towards the restaurant. But first a look at the waves from the deck in the dying light. No land, no other ships, just the intimidating sea below us churning away like an eternal engine, keeping something alive unseen below the waves. I eyed the lifeboat and considered the horror of a ship sinking in the wilderness of the sea. Back inside, the corridor moved and the sensation of walking on marshmallows made your stomach turn. By the time we had sat down in the restaurant Olivia was looking decidedly shades of washed-out white and shady grey, beads of sweat appeared on her forehead and she was unable to move. When the waiter came she asked for a bag rather than a drink and within five minutes had found the strength and the will to get out of the restaurant and return to the cabin.

The menu in the restaurant was the usual terrible choice if you are a picky vegetarian so although dinner was included, it was the two plates of french fries that we ate on the outward journey. I took them precariously to the cabin, weaving from side to side trying to find solid ground in the corridor. When I finally made the heavy cabin door and entered Olivia was lying down and felt better managing to keep her stomach’s contents intact. I lay down on my bunk too and after a short time picked at the french fries before giving up with the food altogether turning the light out and continuing with the plan of sleeping as many of the 28 hours of this journey as possible.

I awoke at 11 PM to do day 501 of French in the free half-hour they give you on the internet before you start having to pay. It seems primitive, old-fashioned to have to pay for the internet these days – Olivia commented like paying for water. The last time we were on the ferry, the internet was free in half an hour blocks. (Why?) This time you get one free half an hour and then have to start paying, but the difference to last time is that it now works in your cabin. This is worth paying for, not having to wander out into those sickly moving corridors again is a result and I am gladly paying for that luxury, lying here on my bunk hoping I can sleep through the night even though I’ve been asleep most of the day.

If you close your eyes and think sci-fi you could imagine you are on an intergalactic leviathan rumbling through space. You can hear the rockets of the freighter firing as you circumnavigate the moons of a distant planet carrying obsidian ore to an alien outpost.

I wonder if one day we will be considered to be the unfortunate people who had died before the world changed, a world in which the existence of other life in other galaxies has both been discovered and excepted. One of those previous generations, some of which had never experienced the motor car or the telephone, air travel or the personal computer and ours that never knew of first contact. 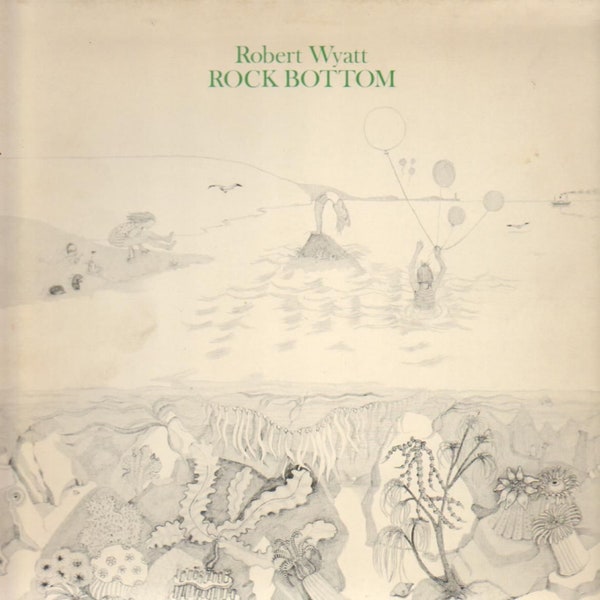 Music today has been the genius of Robert Wyatt and the highly appropriate Rock Bottom (1974) with its wonderful opening track Sea Song. This is an album I have loved over the decades; the lyrics, the mood, the arrangements, the instrumentation, the tunes and the ethereal quality of Wyatt’s voice which seems to simultaneously transcend the heavens whilst strolling through a South London park.

You look different every time
You come from the foam-crested brine
It’s your skin, shining softly in the moonlight
Partly fish, partly porpoise
Partly baby sperm whale
Am I yours?
Are you mine to play with?

When you’re drunk
I like you mostly late at night
You’re quite alright
But I can’t understand the different you
In the morning, when it’s time

To play at being human for a while
Please smile!

You’ll be different in the spring
I know, you’re a seasonal beast
Like the starfish that drift in with the tide
With the tide
So until your blood runs
To meet the next full moon
Your madness fits in nicely with my own
With my own
Your lunacy fits neatly with my own
My very own