Crashing towers of CDs, vinyl boxes too heavy for a mere mortal to lift, the problem of space when the boxes are full, breaking down the shelves, where do we put them? It’s actually back-breaking work and we’re racing against time with the removal men coming on Monday. The pace is also slow, mainly because of the space which means you have to get yourself into all sorts of angles and my thumbs are killing me from stretching and grabbing records and pulling them out in small bunches. We are having to work long hours and with no shower here we have to get to the gym and pool every couple of days to get clean, and that takes time out of the day. Aram came and helped today which was great because he filled a load of boxes with books and DVDs, CD box sets and the like. We discussed the difficulty of getting into The Dead and agreed that we liked Anthem Of The Sun. Seshes are on the calendar but today Chris in New Jersey and I decided that as he was earlyish that the internet might not work properly anyway that next week would be better. Jeff in Ohio also changed to next week but this time because it was chucking down with rain and the internet seems to get worse when there’s water falling from the sky. So trying to keep it short tonight so we can sleep and wake up as early as possible to get straight back into it.

As I’m writing the Kop are singing on Meddle and tonight was the night that Liverpool were playing in Porto, we would have gone, plus they won 1-5 – perhaps that’s why it was best we weren’t there, holding back our excitement as we sat in the Porto end with Porto friends. RIP Roger Hunt, Liverpool striker, who has died today aged 83, he was my youth and although I was a Liverpool fan, I never went to a league game in the seventies but went to one cup game against a German team, that I barely remember. I think the original reason I supported them was because I liked the idea that they had an all-red kit, instead of a different coloured shirt and shorts. I remember one of the lads in my year, Richie Stebbles, had a Liverpool kit, all red, great.

On a tangent, I was walking down the main street a couple of days ago and walking towards me was a young lad dressed like Michael Jackson. He had the shades, the pants too short with the white socks, the haircut and he was carrying some kind of speaker that was blasting out Jackson’s music. That’s a fan. In my youth, we didn’t have the opportunity to carry around some loud music box so that we could blast out Van der Graaf Generator but I do have an image in my head of the kids with transistor radios pressed to their ears, bliss on their faces as they listened to the Small Faces or The Kinks.

I was sad to hear that Alan Lancaster, Status Quo bassist, had passed away. My first experience of them was Pictures Of Matchstick Men with that weird guitar sound and Francis Rossi’s haircut. I was never one for learning the songs of the bands I liked. Not totally true, I remember learning Sunshine Of Your Love and tried to play along with the solo but I didn’t try too hard and never figured out Smoke On The Water properly or any of the lovely Jimmy Page songs on Houses Of The Holy. Everyone learned the beginning to Stairway To Heaven which guitar shop owners banned their customers from playing – again. But…I did learn to play the riff to Caroline and Paper Plane. RIP Alan Lancaster who can now form a band with Rick Parfitt with an alien drummer till John Coghlan joins them and another Telecaster-playing singer with a waistcoat or a dodgy haircut, there must be someone out there in the universe on the other side that can stand in for Francis Rossi till he climbs the golden staircase. Does anyone remember when he changed his name to Mike? Weird, I imagine he thought Francis was too posh, haha. His real name is Francis Dominic Nicholas Michael Rossi, he must have thought all the other names were also too posh. 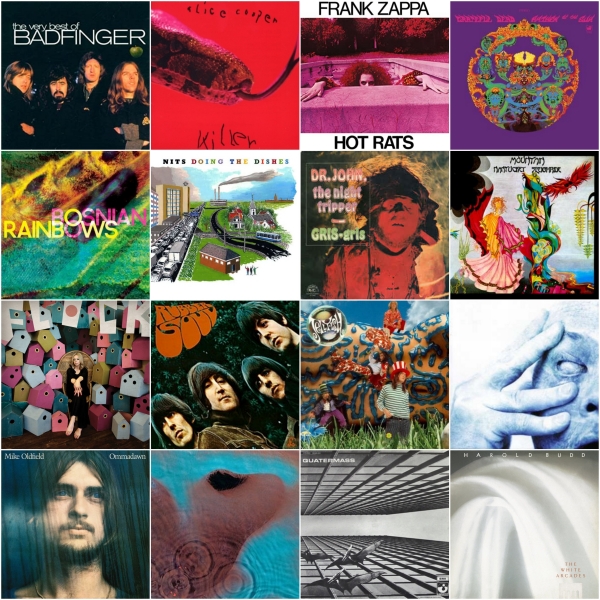 Music today has been immense and the work would have been way harder without it. I’ve been figuring out how to keep the stereo going till the last minute and I now have the speakers on their sides on top of the boxes with a secure spot on the windowsill for the CD player, the turntable and the amp. So instead of going on about how great today’s music was and spending precious sleeping time doing so, I’m just going to list the albums I played and let you imagine what listening to these 16 albums in a row might have been like: