Day 2 in the archive packing up started with a sesh with Arktik Lake Tony in Sydney and a full-on fight with the internet. It’s capricious and there seems to be no rhyme or reason as to why it misbehaves. It might let you watch the whole of a margarine advert and stop you from listening to the announcement that aliens have landed in Cheltenham. Do people still eat margarine? Have the aliens settled in? Are their spaceships rechargeable? Or do they need meteorite oil to fly? I digress, orders are coming in for the Arktik Lake – Shimmer EP, remember there are only 200 available and when those aliens get to hear about it, it will be all the rage on the meteorite stations and copies will sell for zillions of intergalactic credits. At this point, you can pre-order for an October 4th release on Bandcamp here.

My guitar collection consists of nice guitars with nice cases but I have some nice guitars that don’t have nice cases. My Hofner Senator bass has a horrible case, all the latches are broken and rusty and it’s cheap and nasty, a travesty really considering it’s such a cool bass. But just to tangent off into guitar and bass nerd land for a second, I have half-wound strings on it and that’s because there was a time when it was my only 4-string bass. The problem is if you hit the strings too hard they rattle against the pickup. Now I have the Rickenbacker bass the Hofner doesn’t need half-wound strings, they were only on there as a compromise because flat wound strings are so particular and they suit some things perfectly but not everything. Now I have the Rickenbacker for flexible bass playing, more sustain on the notes, and the Hofner for character and that wonderful dull thud.

My Hagström 8-string bass case makes the Hofner case look like the bass case of a king. This case is the cheapest, worst, disgusting, rotten, unsafe, protectionless load of rubbish you’ve ever seen. It’s twisted and consequently, the two sides of the case don’t fit together properly, none of the latches work or they are missing, I might do better wrapping the guitar in an old carpet. The problem is it’s the only thing I have to protect it and finding an original case for a 1968 Hagström 8-string bass isn’t the easiest. They have an odd-shaped headstock that goes off at all angles and a thin body. It’s the strangest instrument and this one does have flat wound strings on it but its sound is so particular that you only use it now and again, check it out on the beginning of New Scientist on the Noctorum album Honey Mink Forever (2011) and just to reconfirm, there will be no Noctorum vinyl rerelease next year on Record Store Day, maybe 2023.

Have you heard about the price of bubble wrap? Have you heard about the price of velcro? We need quite a lot of bubble wrap to wrap the artefacts, plus there are 25 lava lamps to protect. I need the velcro to stick those extra effects pedals to the pedalboard I bought from sessioneer Noel, instead of having them all in a box, where they bang together and can easily break the little plastic knobs, or they knock the knobs off altogether and then you lose them. Fascinating stuff today, pedal knobs and old broken guitar cases but packing is actually an all-consuming intense happening. You discover things you haven’t seen for years, you discover new levels of dust, but it’s great for listening to music. They say the last thing you pack and the first thing you unpack is the kettle (if you’re English) but it’s actually the stereo. I will be holding onto the stereo till the very last minute.

Boxes, tape, stuff everywhere but tomorrow we start on the vinyl and that’s going to be a massive job. Also, the boxes look like they are going to be heavy. I prefer the idea of having twice as many smaller boxes, but hopefully, the removal men will be strapping and the distance to the truck short. In fact, the truck situation has us needing a smaller Luton van to deliver the boxes to the mega truck that will be parked by the beach because the big truck can’t get down the road where the Archive is.

Struggling with the internet but sessioneer Brian in Indiana was actually trouble-free, it makes no sense. I hope Olivia can post the blog tonight. 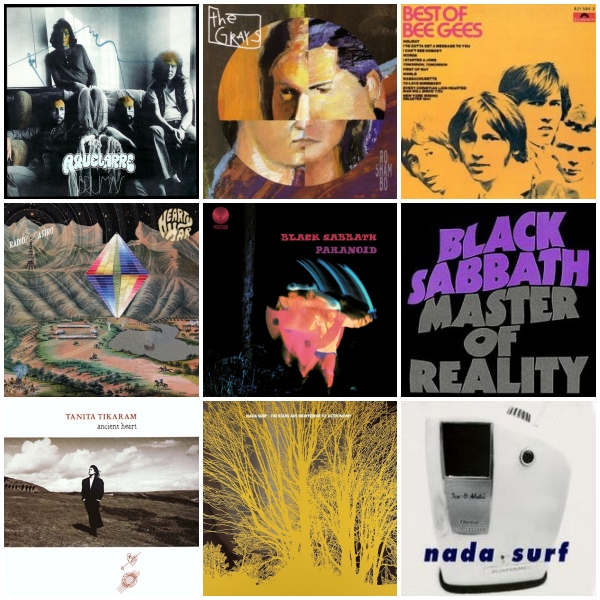 Music today has been a varied mix as usual. Starting with Aquelarre and Brumas (1974). The word aquelarre in Spanish means ‘diabolical assembly’, there’s even a demonic fantasy role-playing game with the same name. The band came from Argentina, the album title means Mists. This from Wikipedia:

Their music was more sophisticated than the standard Argentine rock-and-roll from the early 1970s, with constant rhythmic and melodic changes, surrealistic lyrics, and even free jazz passages.

Next, Olivia put on that classic Best Of Bee Gees album (1969) with all the sixties hits, classic, pre-disco Bee Gees, the best. Then the oddly named Hearty Har‘s Radio Astro (2021) starring Shane and Tyler Fogerty, John Fogerty’s sons. Still in the mood for Black Sabbath, I played Paranoid (1970) and Master of Reality (1971) before oddly following those two records up with the very middle of the road Tanita Tikaram’s Ancient Heart (1988). It seems there’s some darkness in the lyrics but it’s strange how an artist just appeals to a large audience right away as she did. Last but not least it’s Nada Surf‘s The Stars Are Indifferent To Astronomy (2011), great power pop and followed by their debut Karmic EP (1995).