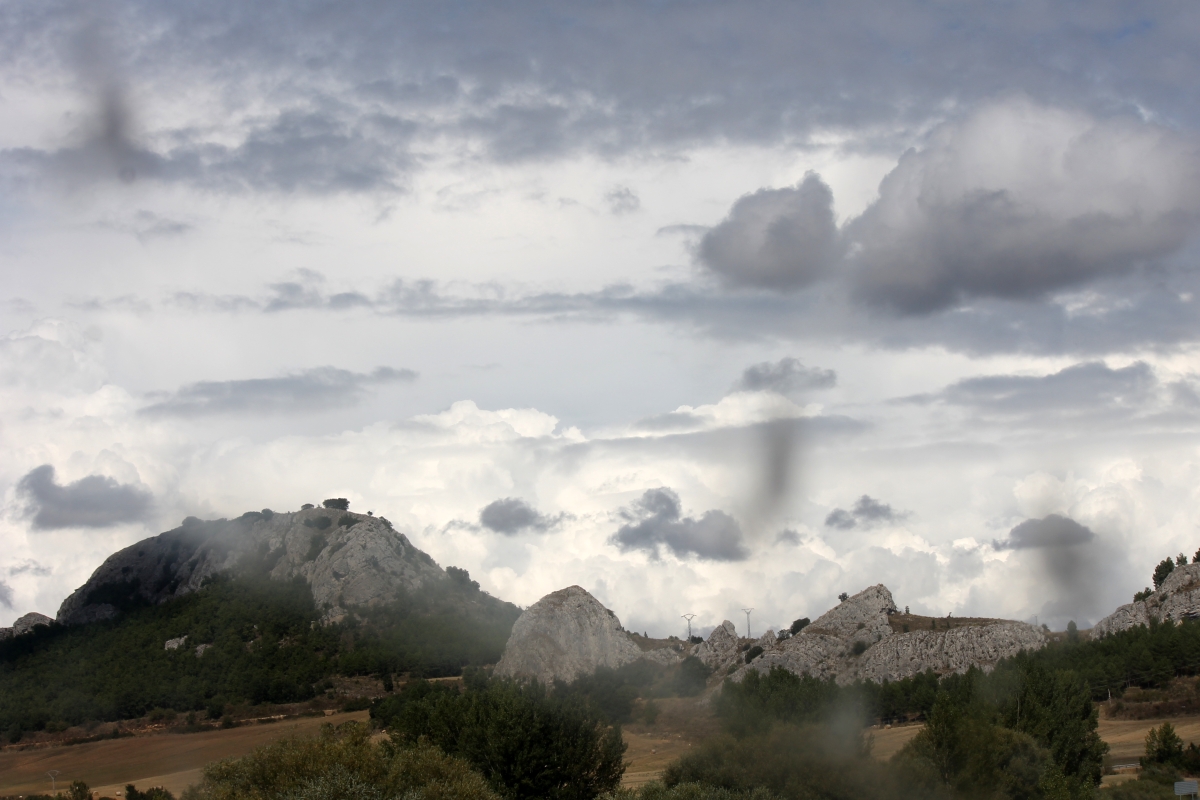 The horror of the practicalities of travel versus the sublime experience of seeing the world. To go anywhere different to where you are from is eye-opening, educating, stimulating, inspiring but you have to want to be shaken out of your cosy world and be prepared for all the work it takes to go somewhere, especially these days. Two hours of sleep before a seven-hour drive is never good, but it just seems to take forever to get prepared even though you’ve known for weeks that you are leaving. There’s always another thing to do, not leaving the milk in the fridge for a month, powering down everything electrical, checking your list of things not to forget and realising how many things you forgot to put on the list. Taking the garbage out, making sandwiches, charging the camera, loading the car in what seems like countless back and forths. The time escapes you and it doesn’t matter what speed you move at or how much of an experienced traveller you are, you are going to forget something and probably be late. 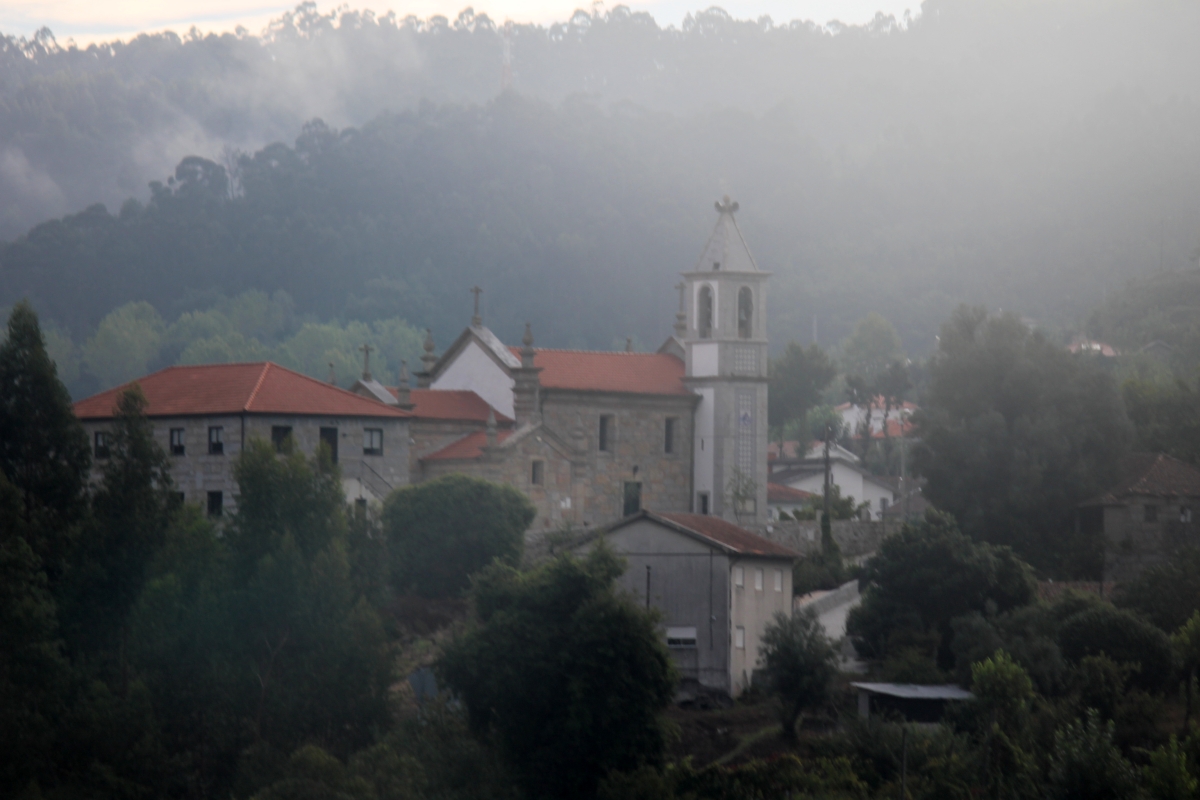 Today’s drama started with me mistakenly setting my alarm for 5.20 PM instead of 5.20 AM with Olivia thinking that I must have set it for later so she didn’t wake me up till it was approaching 6 AM. I wanted to leave the house at 6.30 AM, we left at 7.20 AM. So time disaster one complete, it didn’t take long for time disaster two to settle in. Unknowingly, Olivia had her phone set on ‘avoid toll roads’, after about half an hour I said, “Are you sure this is right?” We were driving through a foggy and busy Valongo, a small satellite of Porto with windy roads, traffic and traffic lights. We should have been straight onto the highway and zooming north at speed on a welcome adventure, experiencing the wonder of being on the road, travelling again, what could go wrong? Instead, we were getting stuck on roundabouts and morning traffic. Olivia pulled over, restarted her phone and reinstated the toll roads (the freeway) into the app. It wasn’t long before we’d escaped the grip of urban chains and were cruising into the countryside experiencing the sometimes rugged terrain of Northern Portugal. No harm done, the boat check-in was by 4 PM, we were arriving at 1.35 PM, two and a half hours leeway, perfect and comforting to know we wouldn’t be late for such an expensive journey. 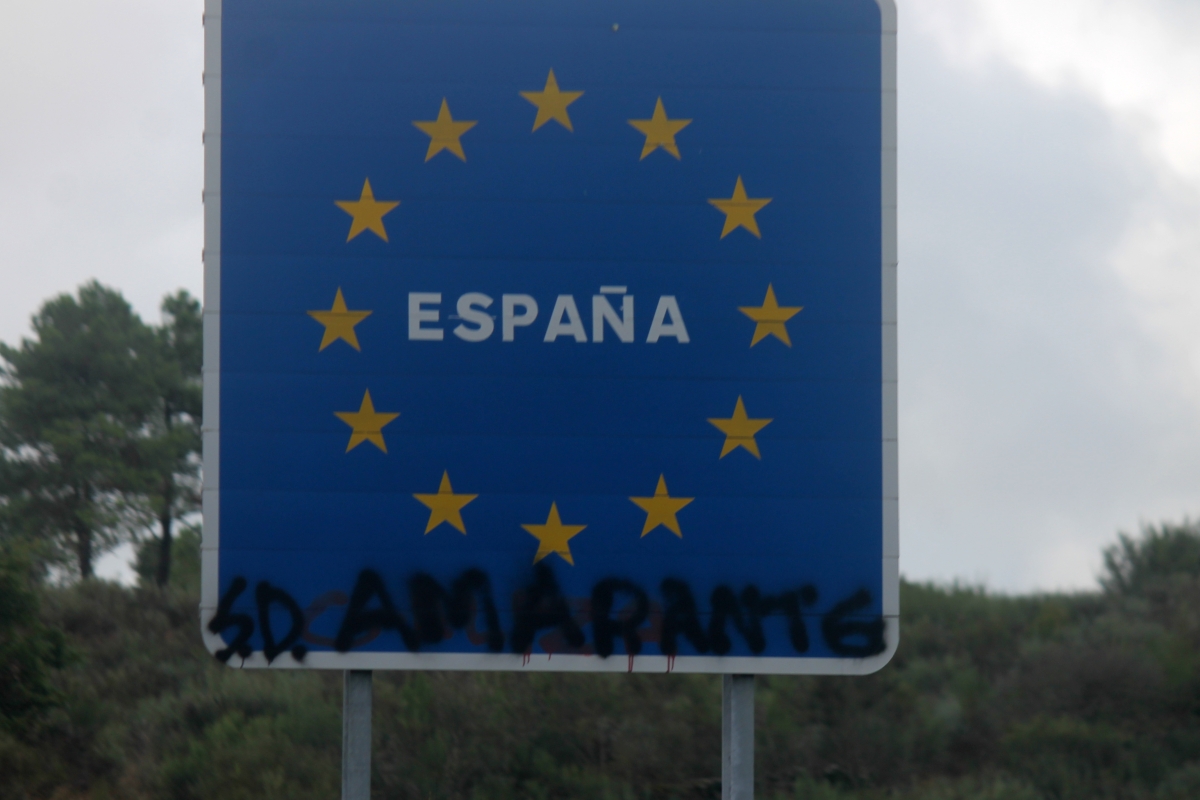 It wasn’t long before we started seeing signs for Espanha, a couple of hours out from Porto; Spain is actually closer than this but we were heading North East so it was more like two hours before we hit the border. As we got closer I wondered should we have allotted more time for the crossing? What if we got stuck there? No problem, we had plenty of spare time. When we got there, the border was a simple sign with EU stars that we breezed through without interruption, one country to the next in the true spirit of borderless travel, it wasn’t long before we realised that something was wrong. The clock on the phone app had jumped allowing us leeway of around an hour and a half. We’d forgotten that Portugal was an hour behind Spain and the boat check was the latest 4 PM check-in Spanish time. Were we late, maybe? It was certainly disconcerting to realise the mistake we had made. On top of this, we hadn’t considered that Ariel wasn’t an Aston Martin so we were travelling under the speed limit and the time to the destination was getting very close to the last check-in time of the boat. We were also running low on gas and we were not seeing services on the freeway. We made the decision to drive off the freeway to a services that were close but time was starting to run against us. We got in and out of there pretty fast, filled up, paid and we were on our way again but the clock was ticking and we were losing time all the time because Ariel wasn’t keeping up with the speed limits. 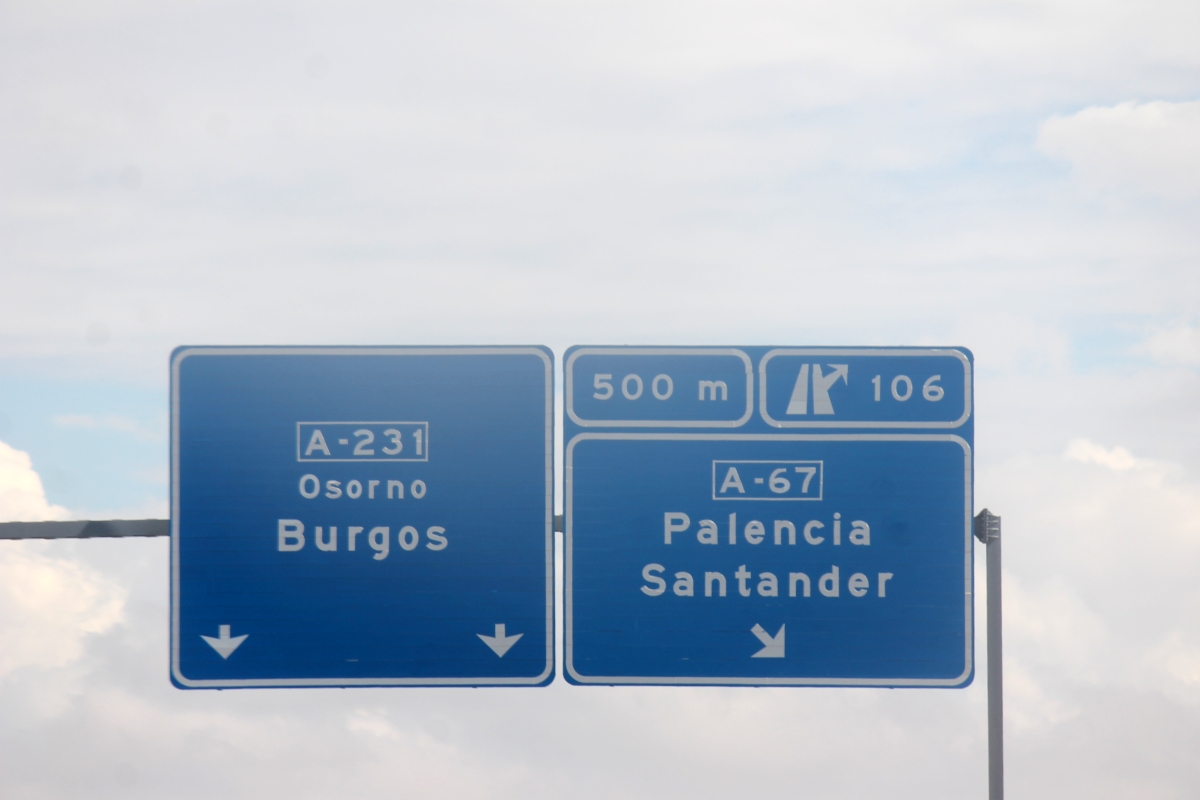 I calculated that at the rate we were travelling we would arrive at the Santander ferry port with less than 20 minutes to spare. Olivia put her foot down but thinking you are a Lamborghini doesn’t make you one. Also, we could see the engine temperature gauge rising as Olivia put the pedal to the metal and the fuel was pouring into the carburettor like a burst dam. Spain and its beautiful big sky with clouds depicting scenes of epic battles in history, hills and tunnels, haciendas, red-roofed and sometimes crumbling, a tractor, bales of hay, I tried to take pictures as we tore across the countryside, Ariel reliving her youth with reckless abandon. It wasn’t long before we realised that we were getting low on fuel again, even though we’d filled up a couple of hours earlier – but it didn’t seem like we had the time to stop. We eyed the petrol gauge, I googled how many miles can we run on empty? Stress doesn’t really cover it, missing this boat would be a huge financial and logistical disaster and it wasn’t looking good. 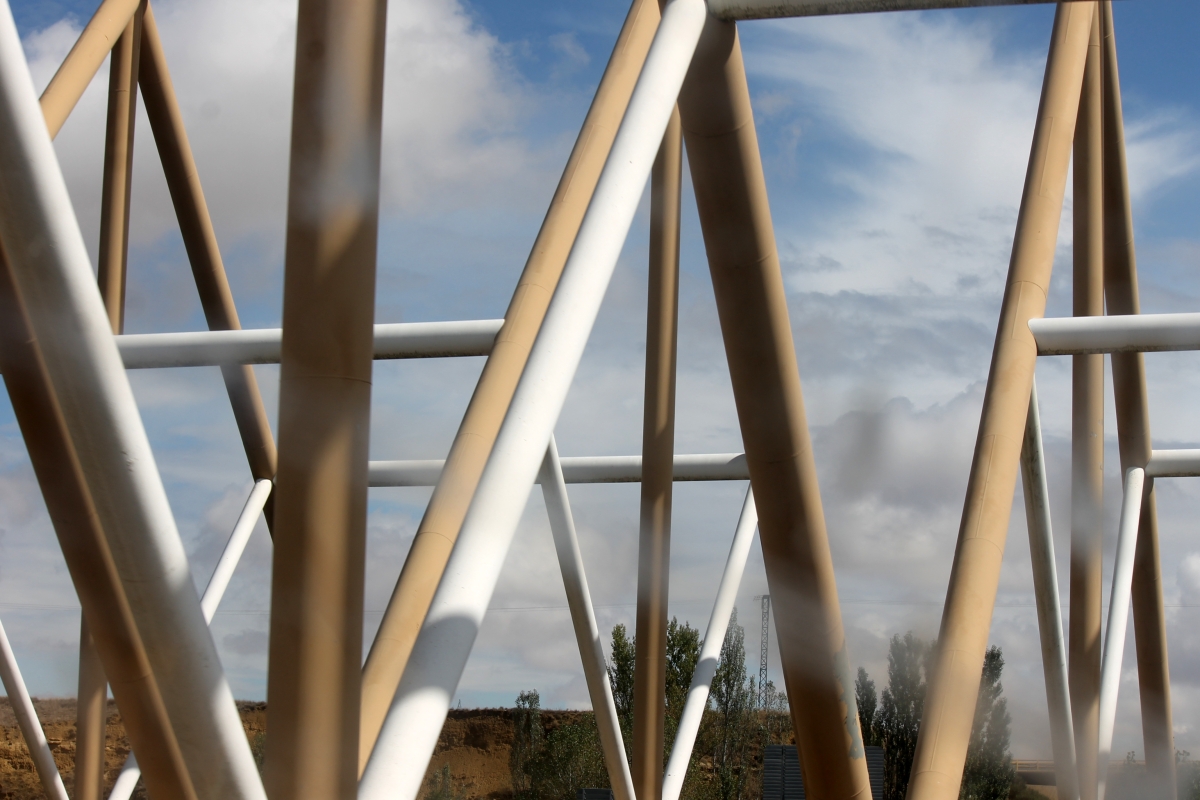 We were still 80 clicks away and the petrol gauge was on zero. We had to go off the freeway and get more fuel, we had to chance that the stop would be short enough for us not to miss the boat because if we didn’t do something we’d miss it anyway, broken down, empty 50 clicks from Santander in despair at our miscalculation. We pulled into the garage, the plan, just put 10 Euros worth in and get out as soon as possible. I thrust the hose into the tank and the diesel flooded out into Ariel’s belly, I was already up to 20€ as Olivia went in to pay (There’s always somebody ahead of you at the till paying for the petrol and wondering whether to get a Bounty or a Mars bar.) I wasn’t looking what I was doing and diesel spewed out all over the forecourt. The tank wasn’t full, it was just coming out so fast and I wasn’t paying attention. I let go of the lever and put the hose back on the stand. A man was calmly watching, I hadn’t realised he worked there at first and when I looked back I saw him pouring sand onto the mess I’d left behind. He must have been in despair at the performance. 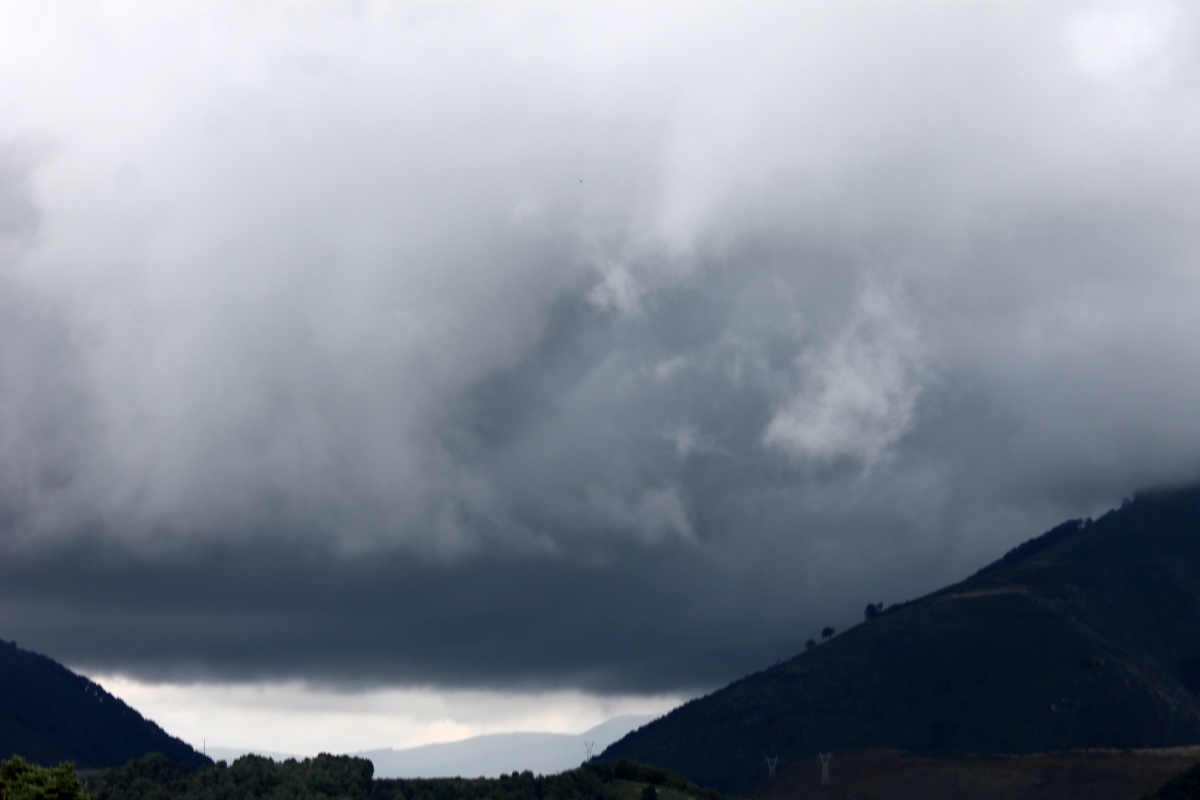 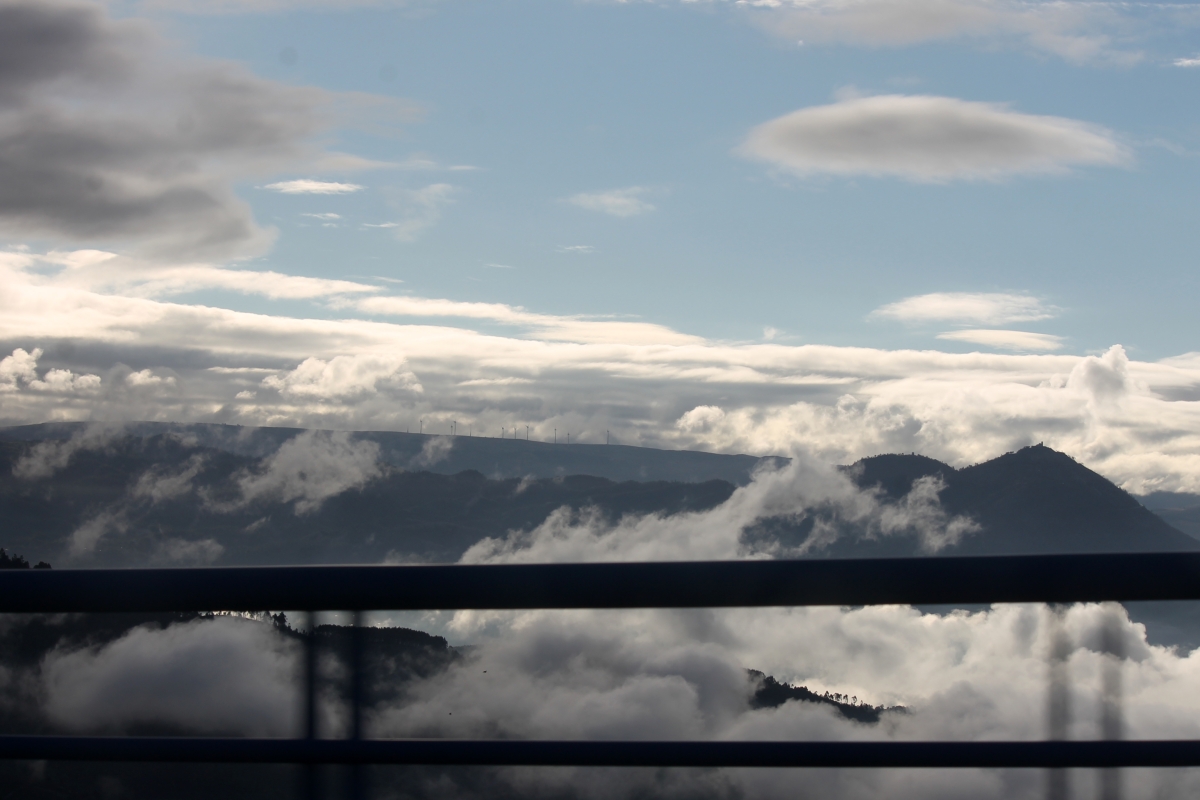 Now we were even later and we had no idea how easy it would be to get through the Santander town and to the port. At this point we would arrive with ten minutes leeway, that’s not much room for error on a seven and a half hour journey. It seemed like there were more and more tunnels as we got close to Santander, precision-cut through the hills, civilisation conquering nature. The speed limit in the tunnels was 100 instead of 120, the gantries above the freeway were warning us of radar traps, we were desperate to keep the throttle on full, hoping not to be stopped by the Guarda Civil. We got closer and closer until finally with minutes to spare before check-in closed we were in the queue for the Brittany Ferries check-in. Somehow we’d made it, against all odds and with a lot more grey hairs.

The paperwork is pretty intense these days for travelling in Europe. Recent Covid test forms to fill in. When I left England for Portugal we were still in the EU, now I was an alien in Europe returning to the homeland and they put a stamp in my passport to remind me. At customs, they pulled us over and had me open the back, I joked with them in Spanish. They let us go and then another branch of customs pulled us over, the ones with the dogs. I joked with them in Spanish too, they were less amused. We were in a hippie van, they couldn’t let us go without the sniffer Alsatian checking us out. I always thought it would be too obvious for a van like this to smuggle drugs, more likely little old ladies but maybe the dogs know weapons too. In the end, we made it, now don’t get seasick. We went to bed soon after the boat left, we were falling asleep where we stood. We decided to get two hours of sleep and wake for dinner (included), but of course nothing for us, only a plate of chips. We ate, I got up, did French and here I am. Now Olivia is going to put it all together like she does – what a driver she is. Now is the expensive internet going to work? 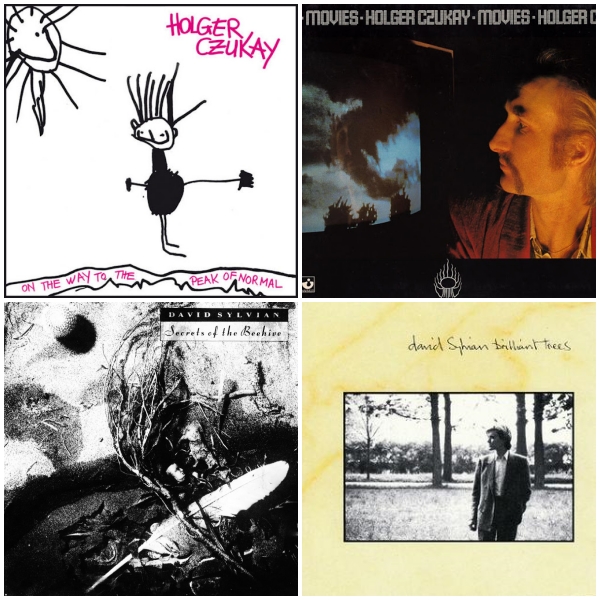 Music today was the welcome meanderings of Holger Czukay’s On The Way To The Peak Of Normal (1981) and the reassessed Movies (1979/2007). That and the calming velvet pipes of David Sylvian on Secrets Of The Beehive (1987) and Brilliant Trees (1984).