At last, it’s the week of the Space Summit CD release. It comes out on Friday and if you pre-ordered it, it’s already on the way. For those of you that are not aware, there is a pressing plant crisis and a manufacturing backlog, so the limited blue vinyl version of the album won’t be in your hands till next year, but actually, next year isn’t that far away. You can still pre-order it now. You’ve seen the three videos for the first three songs from the album, I’m Electric, Life This Way, and Queen Elizabeth’s Keys. Please spread the word, I think this is an album that a lot of people would like if they only got to hear it and that’s the problem, so please share it where you can.

They are so mad busy at the pool for the new season, that they just keep on telling me to go through to swim and they’ll sort out my membership later. As a regular, they know I’ll always be back. But today they were so busy they didn’t get to put me in the book so when I got to the pool the swimming class had all the lanes taken up. They were friendly though and two of them shared a lane. The only reason I’m telling you this is because after my mile and my other strokes to make it to 72 lengths there was no one in the pool. So, I thought I’ll try and swim the butterfly and take it to 74. I have little idea what I’m doing and if you were watching I must have looked like an old wooden sideboard being dragged through the water by a hippopotamus. But, I made it to one end of the pool and back. When I got back to where I started I was absolutely breathless and stood at the side of the pool gasping for air. I know I was swimming it badly and I was more like an inured moth than a butterfly but it’s so strenuous. It’s an ambition to be able to swim this stroke with some kind of poise, instead of poison.

I had a chat with my mate Ed Rogers on Skype today. We are organising an interview for WFMU New Jersey/New York radio that I will co-host with him and he will play lots of songs from my projects and other favourites and obscurities from both of us. You can check out and listen to playlists and the shows with very special guests here.

I’ve played guitar on a couple of Ed’s albums and you can check them out here. He turned me on to the new Andy Partridge EP today called My Failed Songwriting Career Volume 1, which I ordered straight away without hearing it. I’m saving it for tomorrow.

The sky opened up tonight and let go of the rain like it was in a pre-filled tank. It came down, emptied onto the Earth, turned on its side by a mischievous young child god and then emptied it suddenly stopped, only to do the same thing again an hour later like the child had refilled it and emptied it again sniggering, gazing through the clouds at the people below, watching them run for cover. It’s still warm despite the shower and that’s living in Portugal.

I paid for the boxes to pack the archive today and it was painful, it cost £1,238.66. But it’s really happening. We leave a week on Wednesday for this monumental task of moving the archive, the guitars, the books, and the lava lamps, but if we do actually get it together and we can get it all set up here in Portugal, you are most welcome.

Sesh today with Abby and Nick in Philadelphia, always great because they are both philosophy teachers, hours of mind-zapping entertainment. I was supposed to speak to Noelle in Montreal but they had a massive thunderstorm and the power went out so that was that. 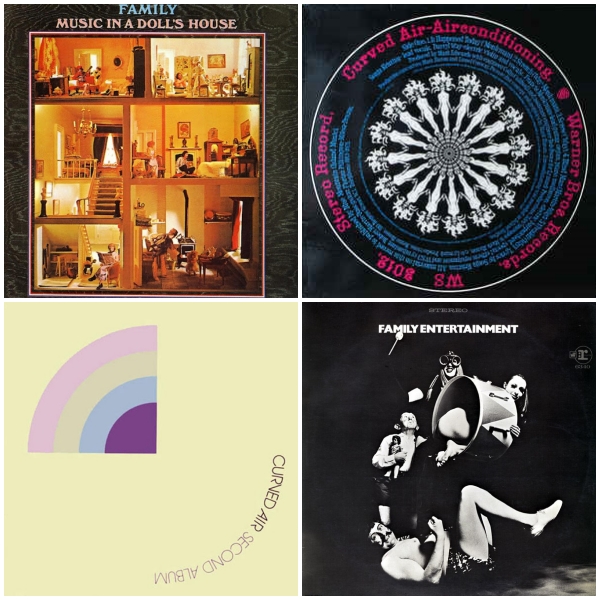 Music today has been two great bands from the late sixties and early seventies that you hear little about these days. Family and Curved Air. I started with the classic Music In A Doll’s House (1968) by Family, their debut album, before moving on to Curved Air’s debut Air Conditioning (1970) and their second album called Second Album (1971) that featured the hit Back Street Luv which reached No.4 in the British charts. Finally playing Family’s second album Family Entertainment (1969). A thought for recently departed Curved Air drummer Florian Pilkington-Miksa who incidentally was replaced by future drummer for The Police, Stewart Copeland, who in 1982 married singer Sonja Kristina. Olivia almost booked a lesson with violinist Darryl Way. Keyboard player/guitarist Francis Monkman went on to form Sky with John Williams.